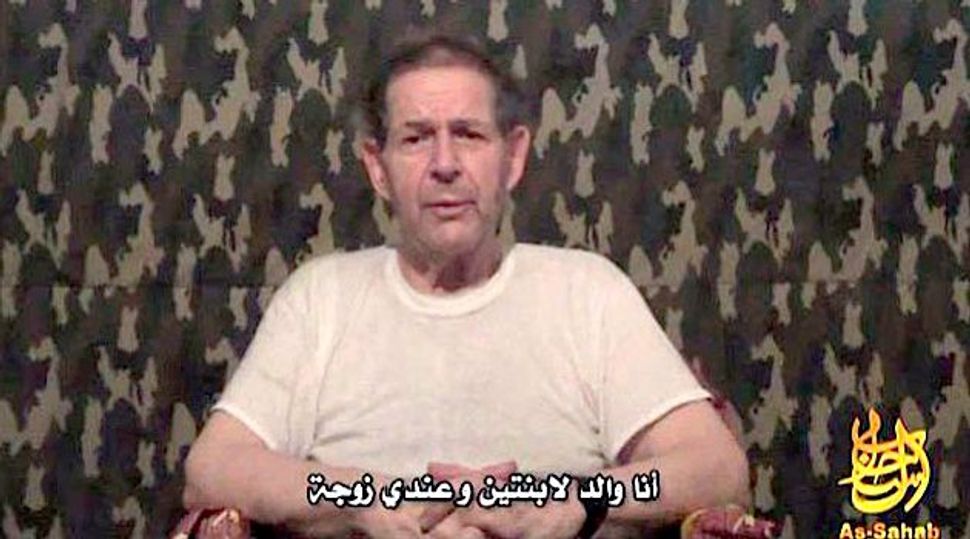 Poignant Plea: After a year in Al Qaeda captivity, aid worker Warren Weinstein appealed to Israeli Prime Minister Benjamin Netanyahu to help win his freedom. He also asked his wife to enlist the support of Jewish organizations. Image by youtube

An American Jew’s desperate plea to Israel and the American Jewish community for help has highlighted his plight as a captive of Al Qaeda in Pakistan, which has held him for more than a year.

In two videotaped messages released by the terror group in September, Warren Weinstein, a foreign aid contract worker from Maryland, spoke of his Jewish faith for the first time and asked the community to intervene on his behalf. “Please, also, I beg you,” Weinstein asked his wife in one of the messages, “work with the American Jewish communities in order to work with the Israeli government.” 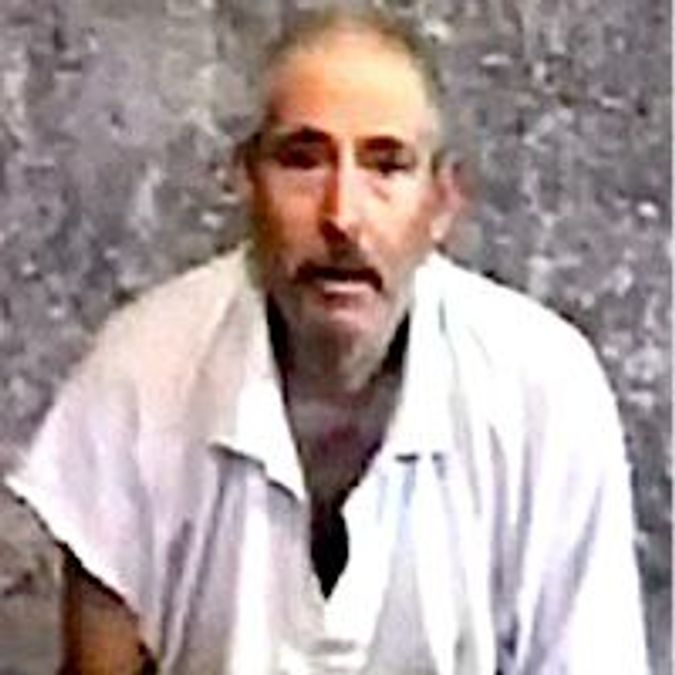 The request caught the organized Jewish community off-guard. Activists have refrained up until now from making Weinstein’s captivity into a Jewish cause, for fear that it would only complicate his situation.

“It’s a new element in the story,” said Michael Salberg, director of international affairs at the Anti-Defamation League. “It changes things, because now he is calling in a public way on the Jewish community to address his case.”

In fact, Weinstein’s plight is one of four involving imprisoned or kidnapped Jews overseas with which the organized community is wrestling as the new Jewish year begins. Each is being held under different circumstances, but all share the dilemma of whether to highlight their Jewish identity or hide it. For its part, the Jewish community must weigh each case according to its individual circumstances, including the role the individual’s Jewishness plays in his captivity.

Beyond these particulars, there is also the Jewish religious and cultural imperative to redeem captives held by non-Jews. Known in Hebrew as pidyon shvuyim, such redemption is a supreme commandment, or mitzvah, that, according to the historic 13th-century Talmud scholar Maimonides, “takes precedence over supporting the poor or clothing them — there is no greater mitzvah.”

Besides the Weinstein case, Alan Gross, a contract employee for the United States Agency for International Development in Cuba, turned to the American Jewish community for help after initially trying to avoid stressing his Jewish connections. In contrast, the family of former FBI agent Robert Levinson, who is believed to have been kidnapped in Iran in 2007, has thus far refrained from asking the Jewish community for help; and in Bolivia, businessman Jacob Ostreicher’s call for release from prison has been echoed actively by New York’s Orthodox Jewish community but has gotten little support, so far, from the broader community. 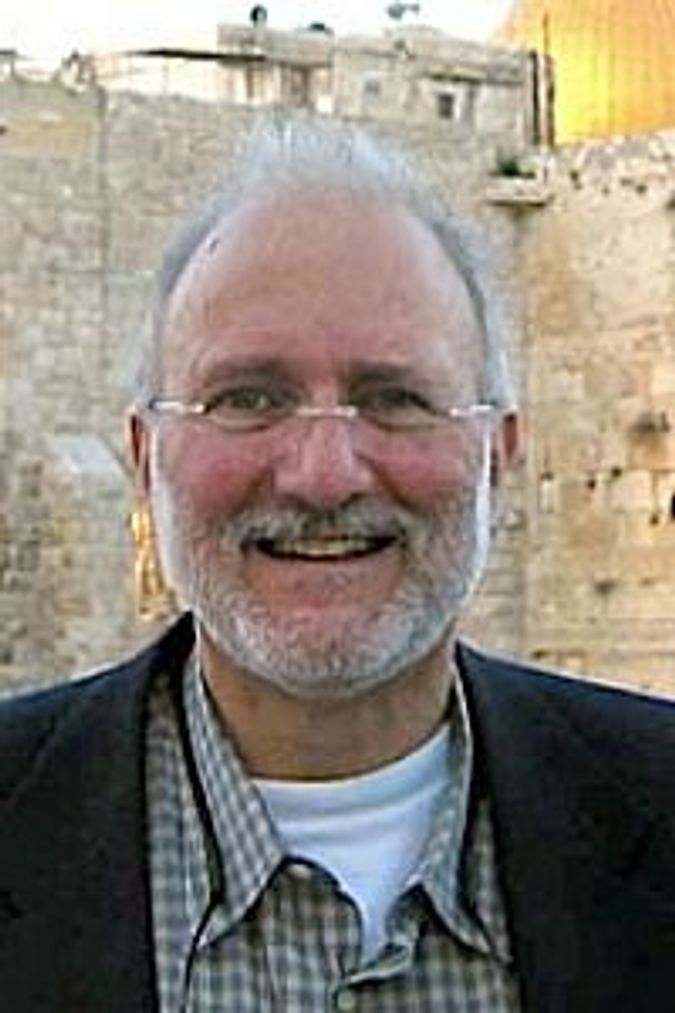 Weinstein, 71, is a veteran international development worker who directed operations in Pakistan for a private contractor. In August 2011, kidnappers took him captive from his home in Lahore, which they entered by posing as neighbors bringing food for the meal ending the Ramadan fast. In December, Al Qaeda announced that it was holding Weinstein, and in May the American appealed to President Obama via a video message to release prisoners in return for his freedom. Al Qaeda leaders later also demanded an end to drone attacks by the United States in Afghanistan.

On September 12, a new Weinstein video appeared on a website known to be affiliated with Al Qaeda. In the message, Weinstein directly beseeched Israel’s prime minister, Benjamin Netanyahu. “As a Jew, I am appealing to you, Prime Minister Netanyahu, the head of the Jewish State of Israel, as one Jew to another, to please intervene on my behalf,” he said, “so that I can be released and returned to my family, see my wife, my children and my grandchildren again.” It was not clear from the message how Weinstein or his captives expected Israel to help in the release of prisoners held by the United States.

A day later, another message emerged, in which Weinstein asked his wife to turn to Jewish organizations for help in getting the attention of the American government. “Please make as many contacts as you can with Jewish communities in the United States in order to put pressure on the American government, on President Obama, to work with and accept the demands of the mujahedeen,” said. He also asked the Jewish community to get Netanyahu involved, and requested that his wife reach out to Republican presidential candidate Mitt Romney to do the same.

Jewish groups have yet to respond to the call. The ADL made clear that it would look for ways to raise the issue, although it was not clear what course of action was required. Salberg stressed that though Weinstein’s appeal to the Jewish community marks a new turn in the case, he was not abducted because he was Jewish, nor is his faith the reason he is being held by the terror group.

Other Jewish organizations would not speak on the issue. A representative for B’nai B’rith International said Weinstein’s case “is not something we’re involved with at this time.” The Conference of Presidents of Major Major American Organizations did not return calls on the issue, nor did the Jewish Community Relations Council of Greater Washington, where Weinstein resides. 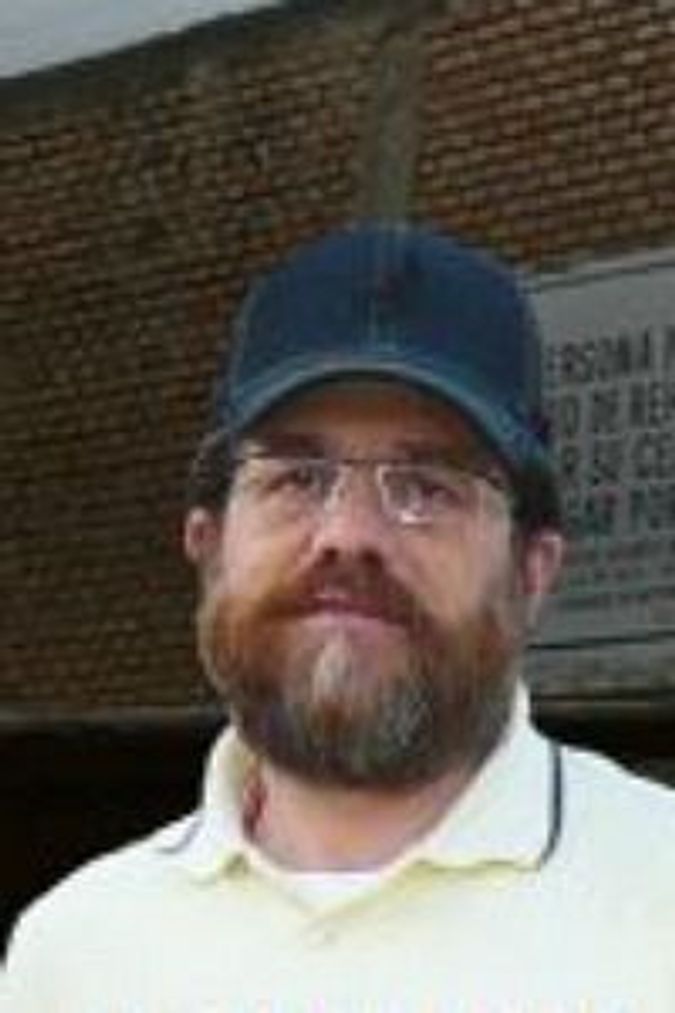 The reaction of the Jewish community to cases of Jewish Americans held hostage or imprisoned in foreign countries has followed, in all four cases, the lead of the families.

In the most visible case, Gross, the USAID contractor worker, was arrested in Cuba and sentenced in August 2011 to 15 years in prison for crimes against the Cuban state after he passed prohibited communications equipment to Jewish communal institutions in Cuba. The family publicly sought the American Jewish community’s intervention only last year, after concluding that all other paths had yielded no results. The community, as well as many individual Jews, responded by signing petitions calling for Gross’s release on humanitarian grounds and attending protests on his behalf.

The Florida family of former FBI agent Robert Levinson, in contrast, has not seen playing up his Jewish connection as a favorable route. Levinson disappeared in Iran in March 2007 while working on a private investigation. The first sign of life from Levinson was received nearly four years later, in a video message sent via email to his wife. Based on the message, the family and experts believe that Levinson was abducted in Iran by a group affiliated with Al Qaeda and is now being held in Afghanistan. The Levinson family, of Coral Springs, Fla., recently marked 2,000 days since his disappearance. The family did not seek help from the Jewish community; nor have the family members discussed his Jewish faith.

“The Levinson family never turned to us for help,” said Eric Stillman, president and CEO of the Jewish Federation of Broward County, in Florida, which has been active on behalf of Gross in Cuba. Since the Levinson family hasn’t sought similar help, the federation will take no action on his case.

Family and friends of New York businessman Jacob Ostreicher, who has been in prison in Bolivia since last June without trial, had a different experience. Shortly after his arrest, for what appears to be a business dispute, Ostreicher’s family and community asked for any help they could get from the Jewish community. Ostreicher’s supporters encountered an organized Jewish community reluctant to weigh in since there were no signs of anti-Semitic bias or animus in the case, nor aspects of it involving any Jewish institutions. The campaign for Ostreicher’s release has been backed almost exclusively by the Orthodox community, of which he is a member.

The families of all four Jewish Americans held overseas are preparing for a holiday season away from their loved ones. Judy Gross recently visited her husband in his Cuban prison, but a bitter exchange between the foreign ministry in Havana and the State Department in Washington after the visit made clear his release is not being negotiated. Supporters of Ostreicher led prayer services for his release September 1, following a decision by a Bolivian court a week earlier to deny him bail. The Levinson and Weinstein families will have only the scarce video messages from their husbands and fathers and the hope that the missing family members will not be forgotten by friends and by their communities.