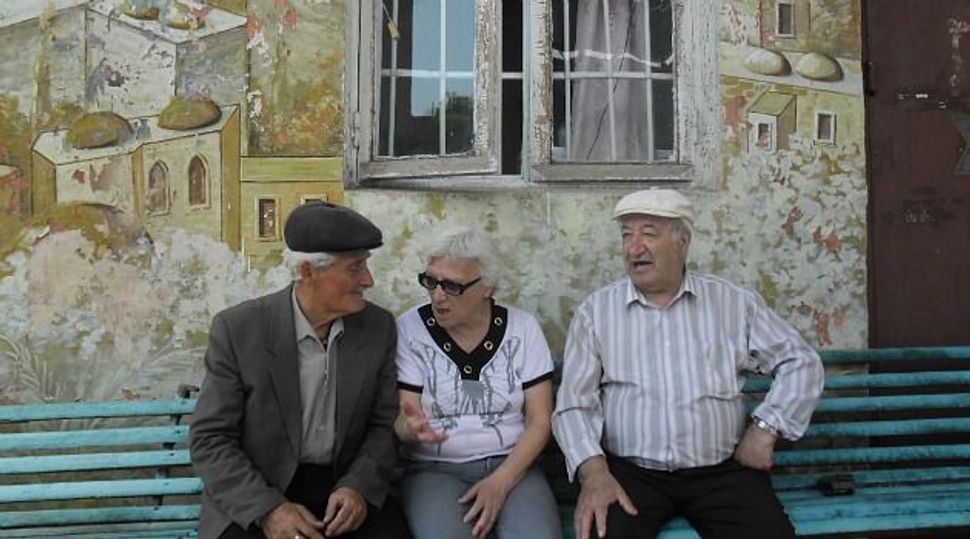 Dwindling: There are fewer than 200 Jews left in the Black Sea enclave of Abhkazia, a small fraction of the community?s former size. Image by maxim edwards

“Yosef Ashkenazi,” a smile creeps across my new acquaintance’s wizened face as he introduces himself and adds “but not Ashkenadze!” That pronunciation would leave Yosef with a typically Georgian surname. But the –adzes and the –shvilis — another telltale Georgian name ending — have all but left Abkhazia. Seventy-year-old Yosef Ashkenazi is, of course, an Ashkenazi Jew, as are the majority of Jews left in this Caucasus territory that has declared itself an independent republic.

It is a republic recognized by only a handful of states in the world, most notably Russia, which has backed the current government strongly. Neighboring Georgia, meanwhile, continues to claim the land as its own. In 1992, more than 200,000 Georgians fled this territory, including the Georgian Jews, part of a wave of ethnic cleansing and atrocities committed by both sides in the wake of the breakup of the Soviet Union.

That was two decades ago. This Sabbath it’s peaceful as Ashkenazi and I walk together into the sun-drenched courtyard of Sukhumi’s synagogue on Inal-Ipa Street to greet a row of octogenarians beneath a fig tree, with whom I chat in Russian. The community’s average age in 2004 stood at 72 and hasn’t gotten younger since then.

The synagogue building is as well worn as its occupants and their wartime memories.

In that context, Ashkenazi’s pun on his surname carries a sinister undercurrent. Abkhazia’s entire Jewish population is now estimated at between 100 and 200, compared to the 1989 figure of 1,308 in the city of Sukhumi alone. The –shvilis and –adzes — that is, the Georgian Jews, whose flight was arranged by the Jewish Agency for Israel in 1993 — will not be returning here. War has cleft this Jewish community in two, giving it the dubious distinction of a Jewish population under threat, though not by anti-Semitism. In fact, the small Ashkenazi remnant still here seem to lose little sleep over the fate of the vanished Georgian Jews. For some, like Ashkenazi, it’s good riddance.

Today, on one side of the synagogue courtyard stands the derelict Ashkenazi synagogue. Navigating its hallways in the dark one finds a mikvah and a thoroughly burnt out matzo oven. The much grander Georgian Synagogue faces it. This is now where the Ashkenazi remnant holds its services. Reconstructed in 1958, the Georgian shul’s faded frescoes on the outer wall depict Biblical scenes of an ancient city surrounded by floral decoration.

Unlike many communities across the former Soviet Union, Chabad has yet to reach these lush Black Sea shores, and the community is led by Igor Chernyak, 38, a veteran of a Moscow yeshiva and president of the Abkhazian Jewish Congress. He leads the Shabbat morning service in the Georgian Synagogue as a small group of 15 pensioners occupy perhaps a fifth of the shul’s seating on a collapsing floor. An Israeli flag hangs limply from the bimah, or stage. Rivka Cohen, Israel’s ambassador to Georgia, made a brief visit in 2004, one of the few recent signs that the town’s remaining Jews are not forgotten.

The full scale of the Georgian Synagogue’s deterioration is masked by the darkness — there is no money for electricity. It is a touching sight. A small group of old friends sit in the dim light on the sagging wooden floorboards as Chernyak leads prayer. On the wall behind the ark there is a mural of an anonymous, rural idyll, done in bold brush strokes, with the towering jagged teeth of mountains in the background. The mural evokes a land of milk and honey, the sub-tropical playground for the USSR’s elite; the Abkhazia of reminiscences and childhoods before the outbreak of the 1992 war.

The service is short and we soon assemble for Kiddush in a small room once used as a prayer hall by Krymchak Jews, a community of Turkic Jews who also once lived here but have since left. My questions have brought back old memories, inflamed by talk of this frozen conflict.

“Anti-Semitism isn’t really a problem here,” explains Chernyak. “Abkhaz have a pretty neutral relationship towards Jews.” I am reminded throughout the course of the day that these Jews are patriotic Abkhaz nationalists. There seems to be little sense of solidarity with the Jews who fled, and Chernyak reinforces this point. “If there was ever discrimination, it was mainly against the Georgian Jews — more due to their Georgianness rather than their Jewishness, so to speak,” he says.

What, then, of the Chechen volunteer forces led by Wahabbi extremist Shamil Basayev that were crucial to the Abkhaz victory in 1992 over the fleeing Georgians? Ashkenazi (“not Ashkenadze”) reassures me, “The Chechens didn’t bother us,” he said, adding casually, “They had their own scores to settle with the Georgians.”

“Jews,” he responds with a toothy grin. As stew is served, a voice from the corner of the room chimes in, “Ashkenazim, that is, Russian-speaking Jews, are real Jews. These Georgian Jews are all assimilated. They’re no different from regular Georgians.”

A chorus of silent nods joins the sound of contented munching. But a bespectacled babushka bristles with indignation. “My grandfather,” declares a woman named Michal, “was a Georgian, and he was a real Jew!”

“Of course. Everybody’s grandfather was a real Jew,” says Chernyak to subdued laughter.

Aside from some contact with Sochi’s Jewish community across the border in Russia and aid from the American Jewish Joint Distribution Committee, the Jews of Sukhumi receive a bare minimum of financial aid. And of late, to be a real Jew here has not been easy. As the community of elders file out into the balmy Black Sea spring, they take home the remainder of the Sabbath challah, as if to illustrate the point.

I have the Georgian Synagogue to myself. It’s deliciously cool inside, though the broken floorboards beneath the pews make for an interesting stroll. I find a framed piece of calligraphy in Hebrew and the curls and hooks of Georgian sequestered in a corner near the Ark, behind a stack of yellowed Soviet-era newspapers encrusted with dust. Eventually, Ashkenazi and one of his friends poke their heads through the doorway. Ashkenazi offers me a chance to see the community’s old photograph album, which we read beneath the fig tree. Black and white Soviet-era photos show a lively community throughout the years of Khrushchev and Brezhnev. The beaming Soviet bar mitzvah boys seem somehow anomalous, yet a poignant English-language letter dated from October 1970 confirms the community’s vibrancy at the time.

“We are pleased to see the Jews of Sukhumi, especially the young, following their religion, and we wish our brothers and sisters well,” write American visitors Jonathan Bernstein, Joy Silber and Miriam Weinberger. “May all their wishes be fulfilled.”

Ashkenazi is keen to show me pictures of the Ashkenazi synagogue in its former glory, a sepia picture of three yarmulked Jews arguing in the courtyard, the shul’s doors open behind them. Above their heads, just beneath the synagogue’s roof, are written the words “Peace to the World” in three languages- Russian, Hebrew and Georgian.

With the photo in mind, I later inspect the old Ashkenazi synagogue’s façade and see that something other than time has taken its toll. The Georgian script has been replaced. Atynchra Apsny!, or Peace in Abkhazia! reads the new Abkhaz Cyrillic script. The arguing Jews, at least, remain constant.

I broach the subject with Ashkenazi. “What are you saying?” he asks with polite hostility. “That,” he says, pointing at the now old text evident in the photo and sliding the book slowly from my hands “is Arabic.”

We stand beneath the peeling frescoes and part ways. Ashkenazi asks me again where I’m from, and I refresh his memory.

“From England? English are Ashkenazim, right?”

He chuckles. As I walk out of the courtyard and onto Inal-Ipa Street, I can still hear him laughing.

“Real humor,” observed the Abkhaz writer Fazil Iskander “is the trail we leave on the way back from the abyss.”