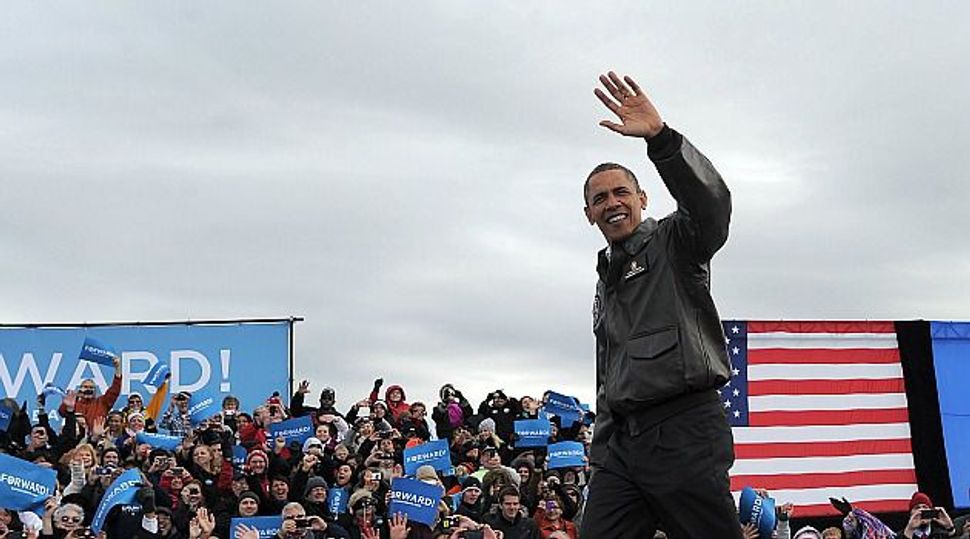 More Than Enough: Early poll results suggest a slight dip in President Obama?s support among Jewish voters. It was enough to help him win four more years in the White House. Image by getty images

President Barack Obama rode a renewed mandate from Jewish voters to win an historic second term in the White House.

With a list of swing states painted blue as the vote count proceeded, Obama’s Democratic victory was clinched with narrow predicted victories in the battleground states of Florida and Ohio, both with significant Jewish populations.

Obama cemented his win by keeping a firm grip on the Democratic base, including Jewish liberals, along with a massive victory among African Americans and a huge win among Latinos.

Jewish Republicans have conducted their largest ever mobilization of activists and of funds, arguing that Obama, now poised to enter his second term in the White House, would maintain an unfriendly attitude toward Israel. The results of this massive Republican effort, according to exit polls conducted on election day, are mixed.

The early data indicates that 70% of Jewish voters chose Barack Obama, a slight decline compared to the 2008 election in which Obama won 74% of the vote according to a compilation of national and local exit polls. (Republicans maintain that Obama’s showing last night among Jewish voters should be compared to his national exit poll outcome in 2008 which was 78%.) Either way, the polls reflect some decline in the support of Jewish voters for the Democrats.

“As predicted, big drop!” tweeted Matt Brooks, executive director of the Republican Jewish Coalition in response to the news on the decline in Jewish support for Obama. Republicans have argued that American Jews are gradually shifting toward the party and last night’s results confirm this trend.

Jewish Democrats brushed off the idea of a downward trend, noting that it corresponds with the national decline in support for the President in comparison to the 2008 elections.

“We were outspent by Jewish Republicans by over $40 million and they only have four points and another four years in exile to show for it. Some mazel,” said Steve Rabinowitz, a former Clinton White House press aide, who ran a Jewish media hub in support of the President’s re-election.

The Jewish vote outcome leaves much room for debate on both sides. For Democrats, it could require a look into ways to counter the slow but distinctive creep of Jewish voters toward the Republican side. Republicans, on the other hand, will have to ponder the effectiveness of their massive cash infusion directed at swaying Jewish voters, a move that brought about only small change.

Florida, one of three key swing states that determined the election and the prime target of Republican and Democratic Jewish outreach effort, seemed to have been a bit more receptive to the Republican message, with 34% of Jewish voters, according to exit polls, voting Romney. Still, the heavily Jewish populated counties of Broward, Palm Beach and Miami-Dade, voted heavily toward Obama, accounting for his narrow lead in the state.

For Jewish candidates for Congress it was a mixed night.

In a race that gained national interest, Brad Sherman led Howard Berman in the battle to represent California’s newly drawn 30th congressional district in the House of Representatives. The two Jewish sitting congressmen engaged in a bitter fight, but Sherman’s strong ground operation and his well-maintained ties with the local constituency, outweighed Berman’s backing from top party officials. Berman, one of the most active Jewish members of Congress and the ranking member on the House Foreign Affairs committee will be leaving Washington come January.

In Ohio, Jewish Republican Josh Mandel, a Tea Party sympathizer and fiscal conservative hardliner, lost his bid to unseat incumbent Sherrod Brown in a race that attracted significant out of state funding. The GOP had pegged its hopes on Mandel, 35, the Ohio State Treasurer and an up and coming figure in the Republican Party, who for a while succeeded in posing a threat to Brown. But in final count, the Democrat incumbent won the race handedly. In other races involving Jewish candidates, Rhode Island congressman David Cicilline won his re-election in face of a tough race that attracted a lot of money and interest.

And in Florida’s 22nd district, another Jew vs. Jew race ended with Democrat Lois Frankel beat Republican Adam Hasner with a large margin.