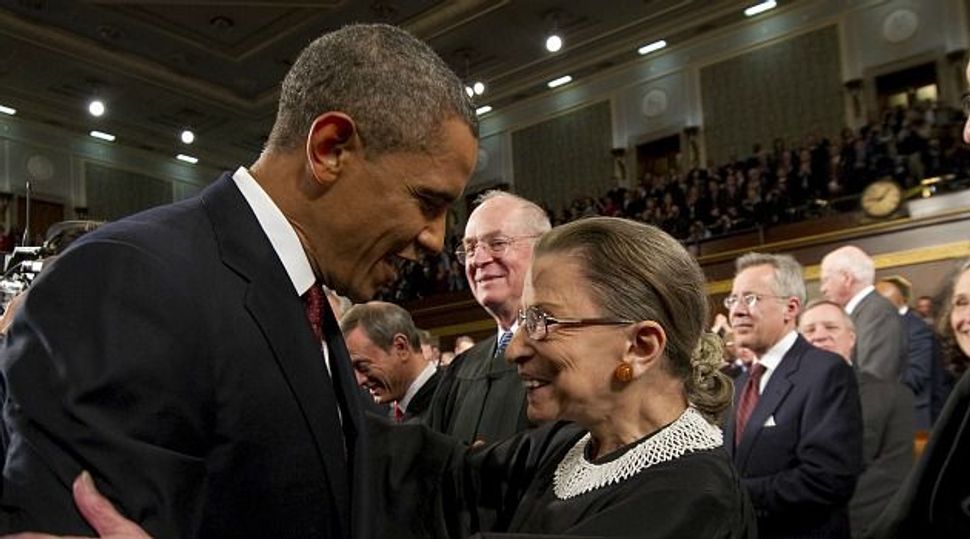 President Barack Obama’s election victory on Tuesday may give him the opportunity to deepen his liberal imprint on the U.S. Supreme Court.

A Harvard law graduate who taught constitutional law, Obama, a Democrat, named two liberals to the high court during his first four-year term.

With his re-election, the retirement of one or more justices in the next four years could preserve the present ideological balance or, more significantly, move the bench to the left.

The court’s nine justices are selected for life and their appointments can rank among a president’s most enduring legacies.

Four are in their 70s. Two – Ruth Bader Ginsburg, 79, and Stephen Breyer, 74 – are liberals. Two – Antonin Scalia and Anthony Kennedy, both 76 – are conservatives. The biggest shake-up would come if either of the last two stepped down.

A swing in the liberal direction could foster a new receptiveness to campaign finance regulation. The five-justice conservative majority, led by Chief Justice John Roberts, has ruled against such regulation, most notably in the 2010 Citizens United v. Federal Election Commission dispute.

The chance of more muscle on the left in the future could influence conservative justices today, tempting them to be more forceful or, alternatively, more willing to compromise with liberals.

“I would bet on the shoot-the-moon option,” said Harvard law professor Mark Tushnet, predicting that conservatives would be more aggressive knowing their chances to prevail could diminish if Obama made new appointments.

Washington lawyer Michael Carvin, who argues regularly before the court, including last term against the Obama healthcare law, said the possibility of a leftward shift was unlikely to affect conservatives’ votes but could prompt them to seek to resolve hot-button cases sooner rather than later.

“If anything, it would make them more anxious to resolve contentious questions rather than kick them down the road,” he said.

Carvin, who represents a set of challengers to a key voting-rights law, said conservatives might be more willing now to take cases protesting the requirement that states with a history of discrimination obtain federal approval for electoral changes.

The five conservative justices have signaled their resistance to the provision and other race-based policies.

Carvin said they might want to address the matter now “rather than in the future when you’re not sure what the court would be like.”

Supreme Court departures, like many of its cases, defy prediction. It is not unusual for justices to stay in their jobs into their 80s or beyond.

The last retirement was in 2010 when Justice John Paul Stevens, then aged 90, stepped down. For decades, speculation about his retirement had been the stuff of election-year news stories.

Before him, Justice David Souter left at age 69 in 2009. Chief Justice William Rehnquist died in office, at age 80, in 2005. Justice Sandra Day O’Connor retired in 2006 at 75, leaving earlier than expected to care for her husband who suffered from Alzheimer’s disease.

No matter who exits and who enters, the court can be expected to stay tightly divided on many social-policy dilemmas. A majority is likely to remain supportive of the rights of gay men and lesbians, although it is impossible to predict how the justices would rule on same-sex marriage.

It is now certain the 1973 Roe v. Wade decision, which made abortion legal nationwide and is supported by the current majority, will endure for at least four more years.

Ginsburg, who has survived colorectal and pancreatic cancer, said in an August interview with Reuters that her health was good. She undergoes regular check-ups and works with a personal trainer.

Appointed in 1993 by President Bill Clinton, she has vowed to remain on the bench at least three more years, to match the record of Justice Louis Brandeis, one of her judicial heroes, who retired at age 82 in 1939, after nearly 23 years.

But she has added, “You have to take it year by year.”