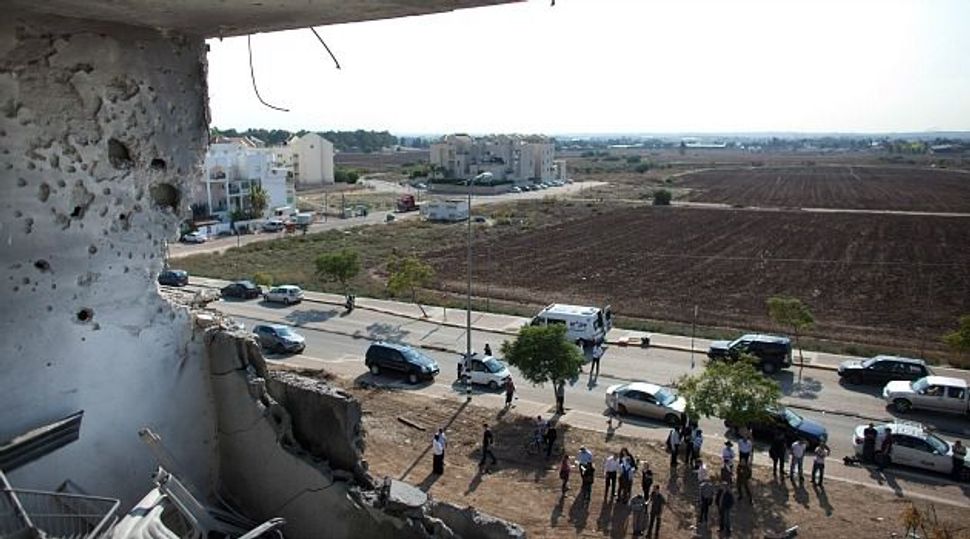 Brave Town: After suffering a deadly hit from a Gaza-fired rocket, the Israeli town of Kiryat Malachi is united in determination to fight back. Image by getty images

A few yards over and four stories up, construction workers drive drills into a bombed apartment building. They speak to each other in Arabic. Can they read the Hebrew banner hanging one floor above them vowing to exact a price for Jewish blood? Or the sign on the other side of the building calling on Israel to conquer Gaza?

Noon has just passed on Friday – a little more than 24 hours after the apartments on the top floor had taken a direct hit from one of Hamas’ Grad missiles, killing three people. As of Sunday, the dead are Israel’s only fatalities since the launch last week of Operation Pillar of Defense.

The Israeli offensive, which started with the killing of the senior military commander of Hamas and has targeted the terrorist group’s governing infrastructure and left more than 60 Palestinians dead, aims to stop the rocket fire raining down on Israel from Gaza. Last week, those rockets reached the outskirts of Tel Aviv and Jerusalem for the first time.

In Kiryat Malachi, the ill-fated apartment building, like others in the low-income Har Chabad neighborhood, contains aging apartments and a peeling yellow exterior. Now its highest floors look like a scene out of 1980s Beirut: a bare skeleton of concrete framing a gaping hole where people used to live.

“Can you get a ladder?” yells Chaim Shteiner, one of the men in a yellow vest. Maybe the remains of the dead are stuck in the next tree, inside clothes that hang from burnt branches.

“They go all over the place,” Shteiner says. “I feel bad, but this is what you have to do.”

Kiryat Malachi’s deputy mayor, Shteiner also is a member of the city’s haredi Orthodox Chabad-Lubavitch community, founded about 30 years earlier to reach out to a growing population of Russian immigrants here.

As Shteiner picks through leaves, 22-year-old Moshe Zackles stands next to a small table on the building’s other side, offering a pair of tefillin to passers-by. Unlike Shteiner, Zackles wears the traditional Chabad uniform – a black wide-brimmed hat and matching suit.

The tefillin serves, he says, as a spiritual antidote to the raw physical tragedy – the “expression of the Jewish people, a symbol.”

Now Chabad needs some outreach as well. Two of the three victims – Aharon Smadja and Mira Scharf – were Lubavitchers. Along with her husband, Scharf had been a Chabad emissary in New Delhi, India, where four years earlier to the day terrorists had killed the Chabad emissaries in Mumbai, Rabbi Gavriel and Rivka Holtzberg, as part of a broad terrorist attack.

“This is holy work,” he says. “We feel we are on a mission. When you’re on a mission, you get strength from the people who sent you and from above.”

Minutes later, a siren blares across the neighborhood, growing louder as the seconds pass. Shteiner and his crew leap over a ledge and press their backs against the building’s rear wall, taking cover under an overhang. For the moment it is the safest place they can find.

After half a minute that feels like 10, they hear the boom, nowhere near them. Shteiner exhales.

“They don’t give us rest,” he says. The crowd is already dispersing. The third victim’s funeral begins in 10 minutes.

The slow procession to the cemetery brings together Lubavitchers in suits and young Sephardic men in T-shirts and jeans. Elderly religious women wearing headscarves walk alongside secular Russian immigrants.

Men sob on each other’s shoulders in a tight embrace. A woman walks arm in arm with a girl, lamenting the “hit after hit, hit after hit,” that southern Israel has absorbed in the days and years before that Friday afternoon.

Minutes after Kiryat Malachi’s mayor, Moti Malka, takes the podium, another siren blares. Mourners scramble in the crowded building. Most take cover once more under the roof and against its only walls.

The chaos only grows after the rocket from Gaza explodes in the distance. After the siren, it seems the sadness has turned to rage.

“Disengagement criminals!” scream the men who had been crying, turning their curses against those who led Israel’s 2005 withdrawal from the Gaza Strip, the so-called disengagement, into a chant.

Calls for silence add to the cacophony.

“Conquer the strip!” the men yell, obscuring the rest of Malka’s eulogy for Amsalem.

Quiet returns by the time Likud Party Knesset member Michael Eitan, a Cabinet minister, addresses the crowd. But the mood has not changed.

While Eitan declares that the terrorists “want to rain fear on us, but they won’t succeed,” the chants of the crowd and the sound of the siren linger in the air. For the roomful of mourners, the next rocket is not far away.