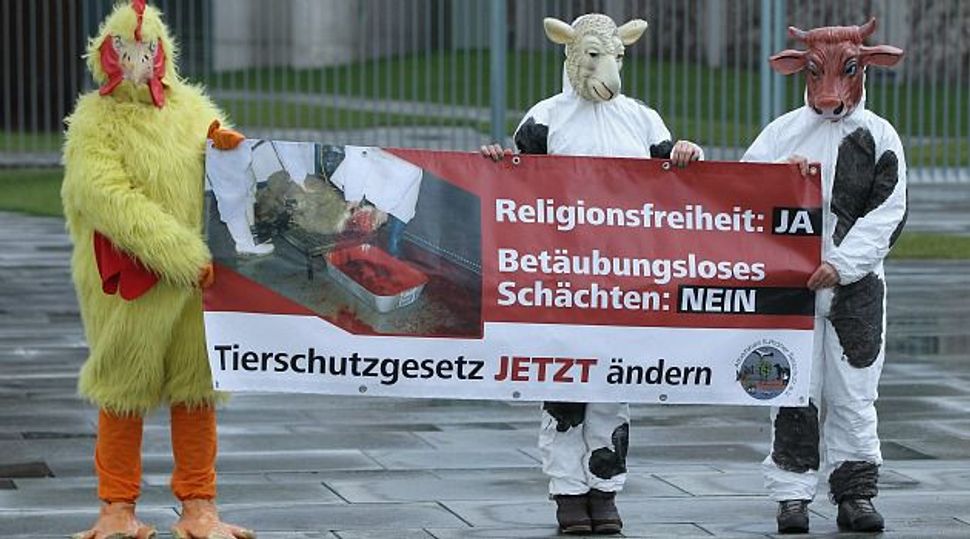 News that ritual slaughter could be banned in Poland caught Jakub Lopinski at a critical moment in his career.

Lopinski, a non-Jewish entrepreneur from Krakow, was preparing to open a new kosher slaughterhouse in an attempt to carve out a niche for himself in Poland’s large export industry for halal and kosher meat.

But the future of that industry, estimated to be worth $250 million annually, was plunged into uncertainty last week when Poland’s highest court declared unconstitutional a 2004 government provision permitting the slaughter of conscious animals only for religious reasons.

The ruling will take effect in January, the same time as a new European law, Regulation 1099, which requires that animals do not experience “unnecessary suffering.” Regulation 1099 provides exceptions for religious slaughter, though some level of discretion is reserved for individual states. Jewish leaders worry it won’t be enough to keep kosher slaughter legal. But for Lopinski, his business depends on it.

“All of this will be resolved through European Regulation 1099 long before we open our slaughterhouse,” Lopinski said.

Poland is far from the first European country to see efforts to curb kosher slaughter on the grounds that it is cruel to animals. But unlike similar measures in Holland and Slovenia, among others, Poland, despite its tiny Jewish population, has a significant kosher industry, one on which several other countries depend for affordable meat.

The Polish Ministry of Agriculture could not provide exact figures on the number of kosher slaughterhouses in Poland, but the French news agency AFP put the total number of kosher and halal abattoirs at 17. Salah Messikh, the director of Halal Polska, a large slaughter agency in Poznan, puts the total at 50. Messikh says Poland exports a few hundred thousand tons of halal meat annually.

Shechitah, as the Jewish regulations concerning animal slaughter are known, accounts for about 20 percent of Poland’s ritual slaughter market, according to Piotr Kadlcik, president of the Union of Jewish Communities in Poland. Only a small amount is consumed locally by Poland’s 6,000 Jews. Most is exported to Germany, Turkey, France, Italy and Israel.

“A ban would be bad for us, but also bad for the Jewish communities in France and elsewhere who depend on affordable kosher meat from Poland,” said Rabbi Yehuda Brodie of the Manchester Beth Din, a kosher certification agency in England that employs some of the ritual slaughterers, or shochtim, for the Polish kosher meat industry.

Messikh, whose halal butchers kill and export 2,000 to 3,000 animals a year, says affordability is why the industry has evolved in a country with so few Jews and Muslims – the latter community’s population estimated at about 25,000, according to a 2010 U.S. government estimate.

“Overhead is much cheaper here than in Western Europe,” Messikh said.

Michael Schudrich, the chief rabbi of Poland, says ritual slaughter will survive the high court’s ruling, which was issued in response to a petition submitted by animal rights activists.

“We’re concerned, but have full confidence this will be dealt with in a timely and effective fashion,” Schudrich told JTA, adding that there is a “tremendous amount of good will on the part of Polish government officials to resolve this.”

Kadlcik was less certain. “It’s difficult to say. Currently, the debate concerns the constitutional validity of the exception made for Jews and Muslims and not ritual slaughter per se or whether it’s cruel,” he said. “But it may also involve a discussion on religious freedoms and how they need to be balanced with animal welfare. And that’s a complicated area.”

Schudrich and Kadlcik said they would engage the government in talks on making sure ritual slaughter is made legal. A statement from Poland’s Ministry of Agriculture on Friday said it was “preparing legal solutions which would not lead to infringement” of religious freedoms, and noted that “it would be necessary to amend the [Polish] Animal Protection Act.”

Richard Prasquier, president of France’s CRIF umbrella group, slammed the decision as “misguided” at a conference on religious freedoms at the European Parliament. Rabbi Menachem Margolin, director of the Brussels-based European Jewish Association, which organized the conference, called the ruling “devastating to Jewish life” in a letter he sent to Polish President Bronisław Komorowski.

In recent years, kosher slaughter has come under attack in a number of European countries. In 2010, the Dutch Parliament first saw a bill tabled by Holland’s Party for the Animals to ban the slaughter of conscious animals. The bill passed but eventually was scrapped last year by the Dutch Senate.

In Slovenia, the national assembly is set to vote on a similar bill. Estonia last month announced new regulations that further restricted an already stringent policy on ritual slaughter. Authorities must be notified 10 work days ahead of each planned slaughter, which now must take place in a licensed abattoir and where a government inspector oversees each procedure.

“I fear the same thing will happen here,” Messikh said. “It’s deeply troubling. I think they could ban it and then what will we do? Open a fish farm in the ice?”