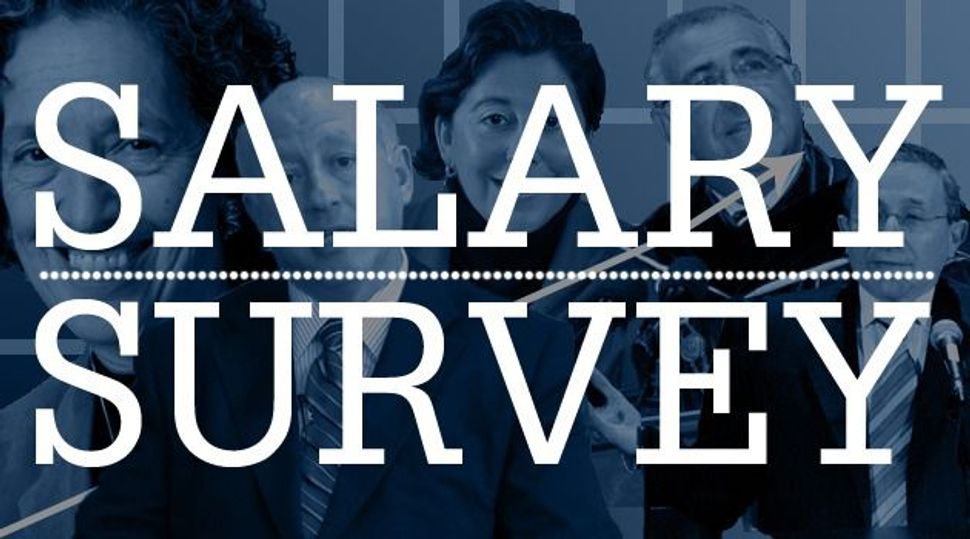 The Forward’s fourth annual survey of Jewish not-for-profit organizations shows little change in communal leadership or compensation, or in the gender gap that has women still lagging far behind the national trends in salary and representation in the upper echelons of Jewish communal power.

The number of women in leadership roles grew slightly, and the gender gap in pay narrowed since last year: There are now 10 women among the 75 leaders of major federations, advocacy and service organizations, and religious and educational institutions, and women earn about 66 cents for every dollar earned by men, four cents more than last year.

The median pay for women in the survey increased, too, to $220,450 this year from $211,000 in the 2011 survey. But these advances were largely due to the appointment in April of Janice Weinman as executive director and CEO of Hadassah, who is paid $410,000, by far the highest salary for a woman in the survey. It is, however, less than what the male chief financial officer of Hadassah earned in 2011, and less than half of what Richard Joel, president of Yeshiva University, takes home. Joel is, once again, the best-compensated leader in the survey, earning $879,821 in 2011, a 3.7% jump from the previous year.

Facing the lingering effects of the recession, some communal leaders saw no boost in salary, while others took pay cuts. But other salaries continue to soar: Abraham Foxman, national director of the Anti-Defamation League, received a 10.75% increase, while David Harris, executive director of the American Jewish Committee, was awarded a 13.7% hike.

In 2010, according to the latest report by GuideStar, which collects financial data that not-for-profits file with the Internal Revenue Service, the median increase in salaries for not-for-profit CEOs hovered at 1.6%.

The Forward survey uses data from the 990 tax forms that not-for-profits file with the IRS, and then seeks to verify the information with every organization on the list. Data from 2012 is used when it is made available. Leaders of religious institutions are not obliged to make public their salaries and other information about their operations, and have declined to do so voluntarily.

The gender gap in the Jewish communal world is larger than in the work force overall. A survey released recently by the U.S. Bureau of Labor Statistics of fulltime wage and salary workers found that women earned around 82 cents for every dollar earned by men. A survey based on 2010 U.S. Census Bureau data put the gap at 77 cents.

Studies by other Jewish organizations mirror the Forward’s findings. A study of rabbinic compensation by gender, released in June by the Central Conference of American Rabbis and representing the Reform movement, found that women rabbis consistently earn less than their male counterparts, as much as 77 cents to the dollar.

Similar trends emerged from an ambitious survey by alumni of New York University, conducted online and drawing nearly 1,700 respondents from all levels of responsibility in Jewish communal organizations. The gender gap was evident among all age groups, with men earning on average $83,388 and women earning $59,654. When it came to full-time workers with dependents, men out-earned women by about $28,400, the NYU survey found.

The Forward’s report documents that the status quo continues in many areas of Jewish communal leadership. There still is only one woman at the helm of any of the 18 major federations in the United States: Jennifer Gorovitz, CEO of the Jewish Community Federation of San Francisco. And among all the denominational seminaries and advocacy groups, there still is only one woman in a leadership role: Rabbi Julie Schonfeld, executive vice president of the Rabbinical Assembly, representing Conservative rabbis.

With the exception of Weinman at Hadassah, men also still dominate the top posts in advocacy and service organizations. After Y.U.’s Joel, the second highest-paid leader in the survey is, again, Marvin Hier, founder and dean of the Simon Wiesenthal Center. Hier also works for and is compensated by SWC Museum Corp.

His total take-home pay in 2011 was $702,857, a 2.6% decrease from 2010. That pay cut mirrored a drop in total expenses and the number of employees at the Wiesenthal Center during that time.

But the Hier household was nearly made whole by the pay increase received by the rabbi’s wife, Marlene Hier, who earned $355,222 in 2011 as director of membership development, about $11,000 more than she took home in 2010. And their son, Alan D. Hier, remains on the payroll, earning $158,091 as international director of fundraising and communications.

And once again, someone at the center received a generous perquisite. As Form 990 reports, “an employee was requested to attend fundraising meetings in Israel during the High Holidays and he could not be away from his family during that time. The Center reimbursed $10,494 for airfare and accommodations for his family to accompany him to Israel.”

Other well-compensated Jewish leaders also receive side benefits. The AJC occasionally pays for Harris to travel first class for flights two hours or shorter, and has covered the travel costs of family members who accompany him on “certain trips.” He also is reimbursed for a portion of the property taxes on his Westchester, N.Y. home — amounting to $25,487 in 2010.

Jerry Silverman, president and CEO of the Jewish Federations of North America, receives a $450 monthly housing allowance. And the leaders of federations in Boston; Cleveland; Miami; Palm Beach, Fla.; Philadelphia, and Pittsburgh can take their spouses on trips at no cost, including overseas travel to Israel. The same perquisite applies to leaders of B’nai B’rith International and the Jewish Community Centers Association of North America,

And once again, the Forward has found that it pays to be a Republican. Matthew Brooks, executive director of the Republican Jewish Coalition, is the fourth-highest earner among leaders of service and advocacy organizations, earning $525,596 in 2011, a 3.5% increase from 2010. Meantime, his partisan counterpart, David A. Harris, president and CEO of the National Jewish Democratic Council, earned $171,200 in 2011, the same as in the previous year.