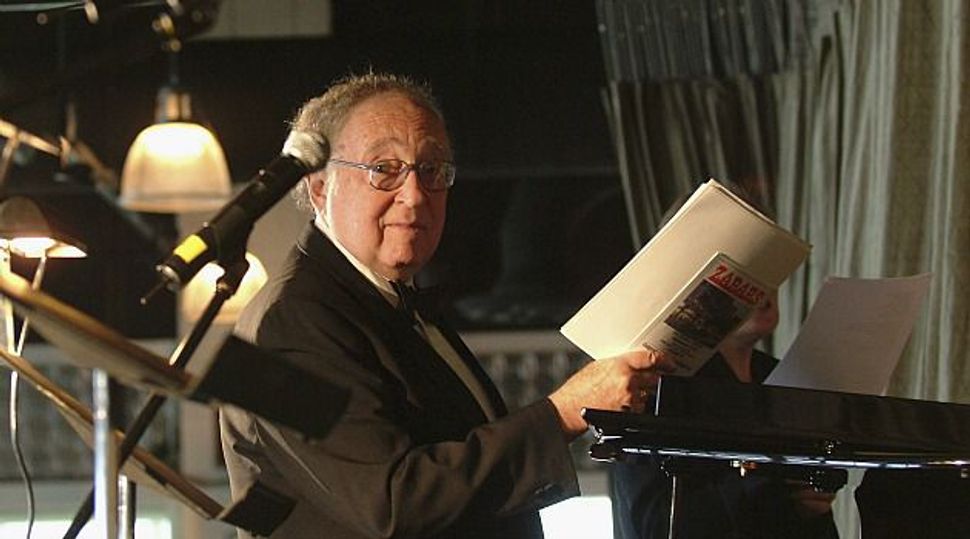 Lullaby Voice: Isaiah Sheffer was known for his lullaby voice on radio. But he also left an enduring cultural legacy. Image by getty images

Most of America knew the great director, writer, actor and impresario Isaiah Sheffer through his deep lullaby of a voice, the one that guided them through his popular weekly syndicated radio show, “Selected Shorts.” But a bittersweet reminder of the many other gifts and achievements of the multitalented stage veteran was provided at the December 17 memorial service held in his honor on Manhattan’s Upper West Side at Symphony Space, the cultural center that, along with “Selected Shorts,” may prove to be his greatest legacy.

Perhaps “legacy” is too sterile a word to describe the impact that Sheffer, who passed away on November 9 at Mr. Sinai Hospital at the age of 76, had on his seemingly inexhaustible supply of friends, admirers and collaborators.

At the memorial service, it seemed as though everyone in the packed 760-seat Peter Jay Sharp Theater had a fond memory to share. The atmosphere was one of warm love, not cool appreciation, one so full of gut laughs and raucous applause that one almost expected Sheffer, like the Finnegan of his beloved James Joyce, to pop up and demand that celebrants pipe down.

The stories were as varied and multi-tiered as the man — a Bronx-born, Stuyvesant High School graduate who first took the stage as a child actor in Yiddish theater and then never left it, whether as an actor, a librettist and lyricist for musicals such as “The Rise of David Levinsky,” a commentator on public radio station WNYC or a host on the Jewish Daily Forward radio station WEVD (“the station that speaks your language”).

But all the reminiscences shared an appreciation for the man’s sense of humor, and almost every person who took the stage over the three-hour event (“We’re running long,” Symphony Space director of literary programs Kathy Minton joked at about the two-thirds mark, though it should be noted that almost no one left early) offered a favorite Sheffer line — for example, one he liked to repeat during his lengthy hospital stay: “I tell people I’ve had a stork,” he’d quip, “but it hasn’t affected my speech.”

Some of the evening’s biggest laughs were elicited when veterans of his long-running musical revue, “The Thalia Follies,” took to the stage to perform Sheffer’s own politically pointed song parodies, along with video clips.

For nine years (eons in show-business), Sheffer and a rotating cast of singers and dancers performed topical song parodies, including a number about fracking long before the phenomenon was known to the mainstream, and an ode to Paul Krugman’s gloomy editorials in The New York Times. Even specialty produce did not escape his satirical claws: In a tune set to the melody of the Beatles song “Yesterday,” he pulled off the near impossible by rhyming “arugula” with “You can Google her.”

Performing the impossible seems to have been Sheffer’s specialty, starting with the miracle of acquiring and renovating the rundown theater that would become Symphony Space, and then finally winning an 11-year-long legal battle to keep it open. And one cannot forget the wildly ambitious performances and series aside from “Selected Shorts.” In 1978 he introduced “Wall to Wall Bach,” a free 12-hour public performance of the composer’s work, in which audiences were invited to participate. The “Wall to Wall” series became a tradition, with events dedicated to musicians from Beethoven to John Cage, Bernstein to Joni Mitchell.

And then, of course, there’s “Bloomsday on Broadway,” a raucous annual reading of James Joyce’s “Ulysses,” in which more than 100 actors, authors and friends take the stage for a seven-hour reading of a book that, according to Bloomsday regular Neil Hickey, Sheffer knew well enough to have taught to graduate students. During the memorial, writer Colum McCann, the National Book Award-winning author of “Let The Great World Spin,” even dubbed Sheffer an honorary Irishman; and Ellen McCourt, widow of the Pulitzer Prize winner Frank McCourt, sang a lovely parody in the Sheffer vein to the tune of “Maria” from “West Side Story” — called, of course, “Isaiah.”

It seems there is not a New Yorker who has not been touched by Sheffer’s work, this writer included: His words were making me laugh and cry long before I knew even his name: My father, Ran Avni, founder and artistic director of the Jewish Repertory Theater, directed “Yiddle With A Fiddle,” for which Sheffer wrote the book and lyrics, when I was still a teenager. “He was incredibly good at getting the spirit of Yiddish,” my father told me not long after Sheffer died. “You remember the song ‘Oh Mama, Am I In Love’? It brought down the house every time.”

In the end, the most touching reminiscences were those of Sheffer’s closest friends and family: His daughter, Susannah Sheffer, speaking about how her father taught her to ride New York City buses; current Symphony Space board member Benjamin Fried, who reminisced about a day when, as a child, he visited the great man’s home and asked for milk. “In this house,” he was told, much to his delight, “the milk always comes with cookies.” And, perhaps most powerful, Sheffer’s widow, Ethel Sheffer, who offered this poignant memory from her husband’s later days at Mount Sinai: “I had just bought a new sundress, and when I came in I saw his face light up. ‘Don’t you look sunny and nice,” Ethel Sheffer recalled her husband saying. “And I thought: ‘Isn’t that remarkable. He’s always a romantic, even now.’”