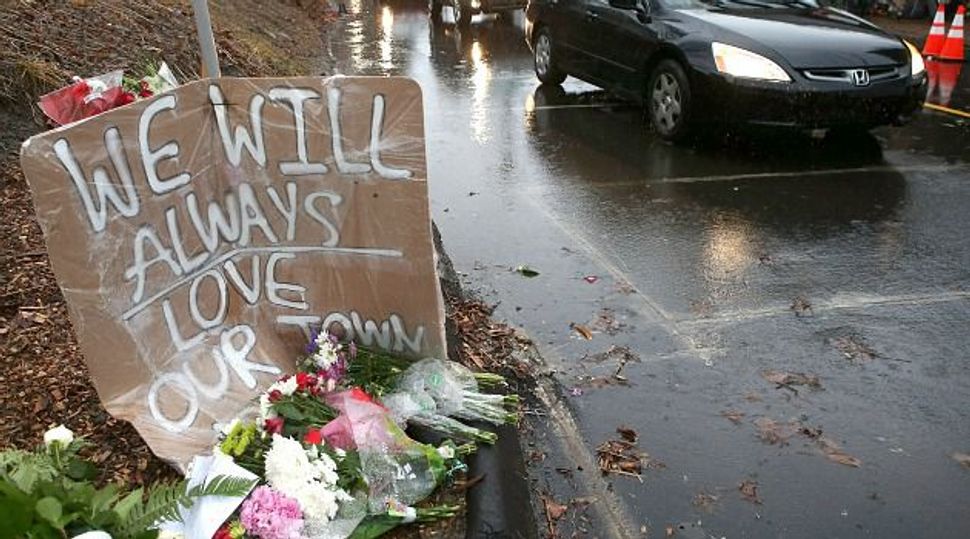 Stop the Violence: As Newtown continues to mourn its dead, the Jewish community is playing a leading role in the push for tougher gun laws. Image by getty images

A Jewish community strongly supportive of gun control plus Jewish lawmakers eager to enact new gun control laws may bring Jews into a lead role as the nation debates federal measures to rein in mass murders at its malls and schools.

The new openness to legislation and other measures following the slaughter of 26 elementary school children and school staff in Newtown, Conn. — plus the killer’s mother — is welcomed by most Jewish organizations, which have long supported gun control. But in recent years, with the prospects for progress on this front all but hopeless until the December murders at Sandy Hook Elementary School, those organizations have been largely passive on the issue.

Now, activists are fighting to seize the moment and get gun control back on the front burner.

“There has been an ebb and flow of activism on this issue,” said Dan Mariaschin, executive vice president of B’nai B’rith International, one of the groups calling for legislation to limit the sales of assault weapons. “It is an issue we as a community care deeply about, but it didn’t find itself at the top of the agenda of Jewish groups.”

UPDATE: The push for new gun laws may have gained more momentum with the National Rifle Association’s widely criticized press conference on Friday, in which the group called for armed guards in every school.

In recent days, that latent passion has come alive. The Jewish Council for Public Affairs has called on members to sign a petition advocating “meaningful legislation” to limit access to assault weapons. The Religious Action Center of Reform Judaism began reaching out to other Jewish movements and to non-Jewish faith groups in an attempt to create an interfaith coalition to back the drive for gun control.

“This can be a model for Congress on how people can work together at times like this,” said Rachel Laser, the RAC’s deputy director. “I think the faith community can play a central role in getting the ball across the line.”

On Capitol Hill, the effort to introduce legislation limiting access to weapons has been led by several Jewish lawmakers, all Democrats (though one now uses the Independent label). California Senator Dianne Feinstein, a longtime leader on the issue, intends to introduce legislation for renewing the ban on the sale and possession of assault weapons, which expired in 2004.

New York Senator Charles Schumer, another leading gun control advocate, has called for legislation that would increase background checks. Senator Frank Lautenberg of New Jersey announced his plan to reintroduce legislation banning the sale of high-capacity magazines. The two Jewish senators from Connecticut, Richard Blumenthal and independent Joseph Lieberman, also stood at the forefront of calls for gun control following the tragedy that hit their state.

But perhaps the most prominent voice on the issue has been that of New York City Mayor Michael Bloomberg, who has been urging President Obama, ever since the December 14 shooting, to make gun control his top priority. During the 2012 election cycle, Bloomberg also funded a super PAC targeting pro-gun candidates.

The outpouring of Jewish support for measures limiting access to weapons does not, however, represent the entire community. As with most issues, on gun control there is more than one view among Jewish Americans. And while Jewish Democrats are drawing attention to their work to curb access to guns, some Republican Jewish politicians are taking a different approach.

House Majority Leader Eric Cantor has been a staunch opponent of putting new limits on access to guns. He voted for legislation protecting gun manufacturers from lawsuits, signed on to a bill easing the restrictions on carrying concealed weapons and opposed tough gun limits for the District of Columbia. All these helped Cantor win an “A” rating from the National Rifle Association. The NRA also gave Cantor its fifth-highest donation in the recent election cycle, $7,450.

Cantor is not the only Jewish politician on the list of top-10 recipients of NRA money. GOP Candidate Josh Mandel, who lost his bid in November to represent Ohio in the Senate, ranked third, with $9,450 received in donations from the NRA.

But the largest Jewish player in the world of gun ownership has been a person little known outside the Wall Street business community. Stephen Feinberg, founder and CEO of the New York-based private equity firm Cerberus Capital Management, in recent years became the single largest owner of assault gun manufacturing companies in the United States. Feinberg, through a subsidiary company he set up, Freedom Group, has purchased several gun brands in recent years. The most notable is Bushmaster, the best-selling assault gun in America. Adam Lanza used a semiautomatic Bushmaster AR-15 rifle in his shooting rampage that left 20 children and seven adults dead.

Feinberg, whose private equity firm manages some $20 billion for its investors, shies away from the public eye and is not known to be active in the Jewish community. His political donations are largely directed at Republican candidates. Meanwhile, Freedom Group has grown into the nation’s largest gun and ammunition maker, with nine factories and more than 3,000 employees.

During this decade, America has experienced several deadly shooting events, including the mass killings at Virginia Tech university and at an Aurora, Colo., movie theater. But the Connecticut shooting struck a personal chord with Feinberg. His father, Martin Feinberg, is a resident of Newtown and lives only a few miles away from Sandy Hook Elementary School, where the shooting took place. As a swirl of media attention focused on on his firm after the shootings, one of its larger investors, the California State Teachers’ Retirement System, also raised questions about the propriety of investing its funds with a major manufacturer of semi-automatics of the type used at Sandy Hook and other mass murder episodes.

On December 18, Cerberus announced that it was selling off Freedom Group and ending its investment in the gun industry. Calling the Newtown shooting “a watershed event that has raised the national debate on gun control to an unprecedented level,” the company said it wishes to sell the Freedom Group in order to avoid “being drawn into the national debate.”

Jewish organizations pride themselves on gun control stances that date back to the early days of the debate, following the assassination of Martin Luther King Jr. and of President Kennedy. Most played a supportive role in passing legislation then limiting access to weapons, and have since reaffirmed their commitment to reducing the availability of guns.

One reason for broad Jewish support of gun control, Mariaschin said, has to do with the community’s sense of security, “which perhaps leads us to feel that the possession of assault weapons is completely unneeded.”

Rabbi Eric Yoffie, former head of the Reform movement, listed in a recent Haaretz article several reasons for Jews siding with supporters of gun control: the community’s affiliation with the Democratic Party; the fact that Jews are urban people and detached from the culture of hunting or gun ownership, and suspicion toward the NRA, which is “associated in the minds of many Jews with extremist positions that frighten Jews and from which they instinctively recoil.”