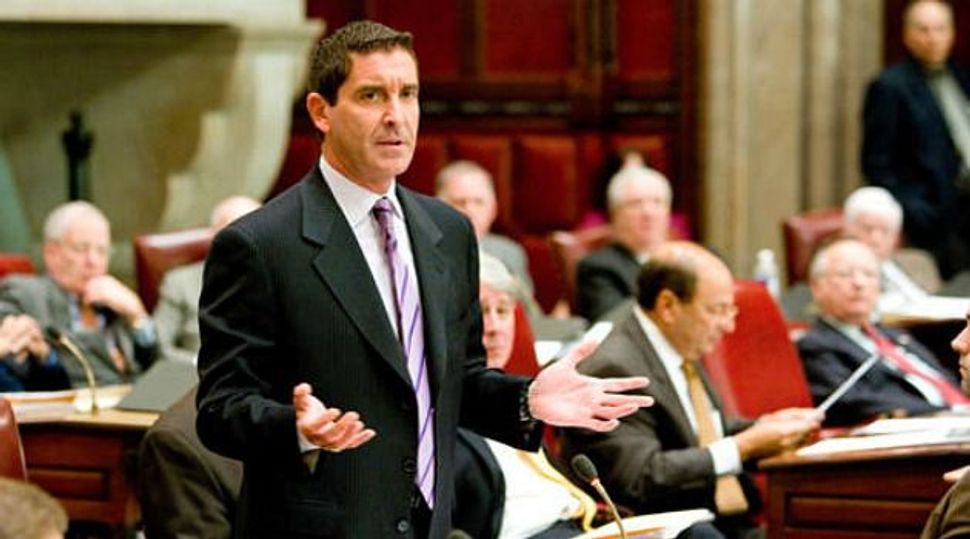 Switching Sides: Democrats thought they had control of New York?s state Senate after winning a majority of seats. Jeffrey Klein and Simcha Felder had other thoughts in mind. Image by courtesy of jeffrey klein

New York’s state Senate is in disarray, due in part to two Jewish politicians who have broken away from the Democratic Party to which the state’s Jews have been historically bound.

Democrats thought they would win control of the New York Senate this year, allowing the party to completely dominate the state’s legislative and executive branches. Those plans were scuttled when Jeffrey Klein and Simcha Felder struck deals with the Republican Senate leadership. The two politicians’ spoiler roles come as a growing Orthodox community continues to erode Jewish support for Democrats — loosening traditional bonds between Jewish politicians and the Democratic party. 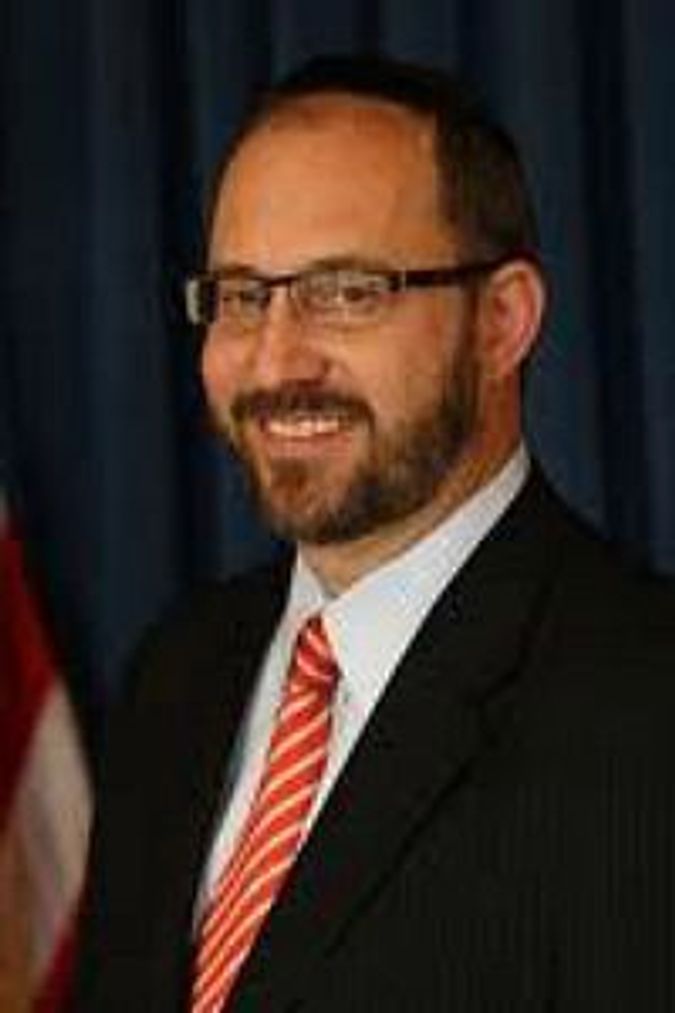 Klein and Felder each represent districts that are home to vastly different sorts of influential Jewish communities: ultra-Orthodox Brooklyn Jews in Felder’s case and upper-middle-class Jews from Riverdale, in the Bronx, and from neighboring Westchester County in Klein’s case.

By allying with the Republicans, both have emerged as kingmakers in a legislative body where backbenchers can be all but irrelevant. And both have decided that their constituents won’t hold their deal-making against them.

“I don’t think it’s much about policy,” said Richard Stein, publisher of the Riverdale Press, a local newspaper in Klein’s district, speaking specifically about Klein’s move. “Really it’s about power.”

The deal Klein negotiated will make him co-leader of the Senate with the head of the Republican caucus. For decades, political power in the country’s second most populous state has been wielded almost exclusively by Albany’s so-called “three men in a room” — the governor and the leaders of the state house and state Senate. Now, Klein will be the room’s fourth man.

The recent history of New York’s state Senate is one of dramatic political maneuvering amidst intra-partisan backstabbing. Republicans controlled the body for decades, then lost the majority by a narrow margin after the 2008 elections. A group of Democratic defectors reversed that Democratic victory and sparked a month-long leadership crisis in 2009. Republicans then won the majority during the 2010 elections, but seemed to have lost it again on Election Day this past November. Then came an announcement from Felder.

An Orthodox Jew like many of his constituents, Felder, a former New York City councilman, ran as a Democrat to represent the newly drawn state Senate district encompassing the heavily Orthodox Jewish neighborhoods of Boro Park and Midwood. But Felder announced a week after the election that he would caucus with the Republicans.

That was followed in early December by an announcement from a group of Democratic state senators calling themselves the Independent Democratic Conference that they, too, had cut a deal with the Republicans. Their leader, Klein, would effectively run the Senate in tandem with Dean Skelos, the head of the Republican caucus.

Klein represents parts of the Bronx, Pelham and Riverdale, all of which are home to small, largely non-Orthodox Jewish communities. Also in Klein’s defecting caucus is David Carlucci, who represents ultra-Orthodox towns in Rockland County. Carlucci’s mother is Jewish.

There’s little that connects Klein and Felder. The two broke with the Democrats separately, striking their own deals. And both were driven by divergent concerns.

Felder’s decision to leave the Democratic caucus is less than puzzling. In the statement announcing his deal with Skelos, Felder alluded to his constituents’ need for state-funded services, saying he would work with anyone who had “a plan to ease the burden of tuition-paying parents across New York.” The reference was to state subsidies for private education, a perpetual priority for his Orthodox constituents, who send their children to private parochial schools rather than public schools.

The Orthodox Jews Felder represents in Brooklyn often vote in a bloc under the direction of communal leaders. That bloc often votes Democratic in an effort to secure needed services, though the voters are ideologically conservative. In parts of Boro Park, Republican Presidential candidate Mitt Romney won 90% of the vote over Democrat Barack Obama.

“Felder is doing exactly what Felder should be doing for the constituency he represents, which is Democratic because of where the communities are located, but not Democratic where their hearts and brains are located,” said Hank Sheinkopf, a conservative-leaning Democratic consultant.

Klein, on the other hand, appears to have been far more worried about potentially alienating Democratic constituents. His public statements, rather than emphasizing potential pork for his district, have focused on his contention that the new alliance will allow him to push traditionally liberal issues like a minimum wage hike.

“We think that progressive goals can be better achieved when we seek to gain consensus on a bipartisan basis,” Klein spokesman Eric Soufer told the Forward. “We learned the hard way a few years ago that… trying to push issues through on a one-party basis is not the best way to actually achieve change,” he said, referring to the Democrat’s short-lived control of the Senate.

The sections of Riverdale and of suburban Pelham in Westchester County that are part of Klein’s Senate district both have sizeable Jewish communities. Though Modern Orthodox Jews have been increasingly present in Riverdale in recent years, the Jewish community is still overwhelmingly non-Orthodox. “Really, they’re not even the majority of Jews in Riverdale,” Stein said of the Modern Orthodox arrivals. “It ain’t Williamsburg, it ain’t Midwood,” he said, referring to ultra-Orthodox neighborhoods in Brooklyn.

Stein, the Riverdale Press publisher, said that in his corner of Klein’s district, the state senator appears to have taken “a lot bigger chance than Felder” did in his district.

“Riverdale has a lot of people who consider themselves Democrats, and who may or may not take kindly, for whatever reason, to a state senator screwing the party out of a chance to take over the upper house,” he said. “You could say that there’s a certain amount of courage in what he’s doing.”

Carlucci, the Rockland senator allied with Klein, represents ultra-Orthodox Jews in the towns of Monsey and New Square. He’s not closely allied with those communities and did not have their support in his first race in 2010.

“I really doubt that Carlucci’s move had to do one way or another with the fact that he represents tens of thousands of Orthodox Jews,” said Yossi Gestetner, an Orthodox political activist.

A recent landmark study of the city’s Jewish community suggests that New York’s Jews are increasingly more observant and less liberal than they have been in the past. The conservative Russian-speaking and Orthodox Jewish communities make up more than half of the city’s Jewish population. Political observers have suggested that these population shifts could have a major impact on Democratic dominance of local politics — something the turmoil in the Senate could foreshadow.

The leadership change brought on by Klein and Felder’s maneuvering has met with staunch opposition from some Democrats. Black and Hispanic Democratic senators have argued that the governing coalition, which is mostly white, would exclude minorities from the leadership. The Senate Democratic conference is led by Andrea Stewart-Cousins, an African-American senator from Yonkers. She was elected in mid-December to succeed John Sampson, who is also African-American.

In response to the charge that the deal excludes minorities, a spokesman for Klein noted that he has prioritized reform to the New York Police Department’s stop-and-frisk practices, which overwhelmingly target minorities.

“We think that people are really, regardless of their party affiliation, focused on the results that Albany produces and that their elected officials produce,” said Soufer, the Klein spokesman. “If you deliver those results that people are asking for and people expect, then the rest will be able to fall into place.”