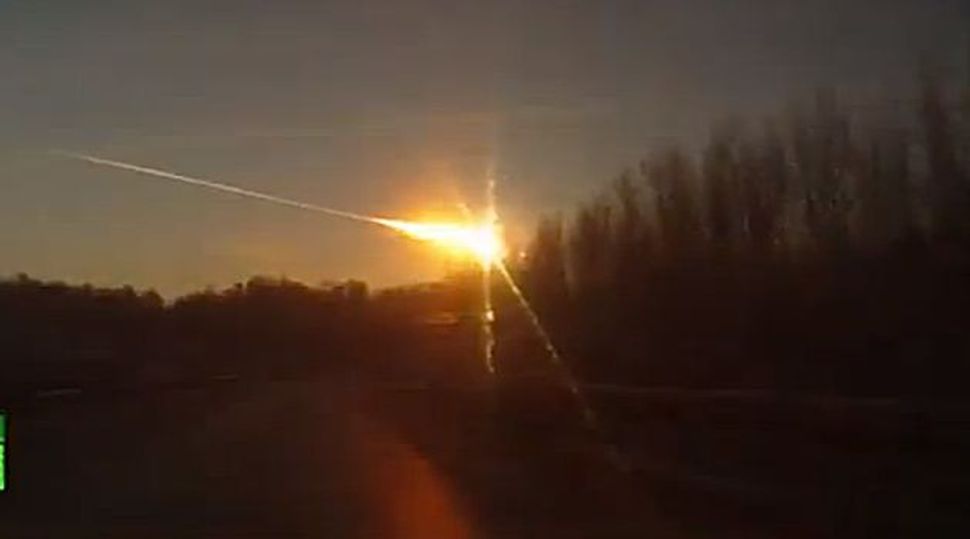 A meteor streaked across the sky and exploded over central Russia on Friday, sending fireballs crashing to earth which shattered windows and damaged buildings, injuring more than 500 people.

People heading to work in Chelyabinsk heard what sounded like an explosion, saw a bright light and then felt a shockwave, in the industrial city 950 miles east of Moscow.

The fireball, travelling at a speed of 30 km (19 miles) per second according to Russia’s space agency Roscosmos, blazed across the horizon, leaving a long white trail in its wake which could be seen as far as 125 miles away.

“I was driving to work, it was quite dark, but it suddenly became as bright as if it was day,” said Viktor Prokofiev, 36, a resident of Yekaterinburg in the Urals Mountains. “I felt like I was blinded by headlights,” he said.

No fatalities were reported, but President Vladimir Putin, who was due to host Finance Ministry officials from the Group of 20 nations in Moscow, told Emergencies Minister Vladimir Puchkov to help those affected. “First of all, it is necessary to think about how to help the people, and not only to think about it, but to do it immediately,” Putin said.

A synagogue in Siberia was among the buildings damaged by the falling meteorite.

Rabbi Yechiel Michel Levitin, director of the Or Avner Jewish day school in Chelyabinsk, was quoted by an Israeli website as saying congregants heard a huge explosion during morning prayers followed by a bright flash that lit up the sky.

“Glasses shattered and people tried to escape, but they weren’t sure were to go,” Levitin told COL, a media outlet affiliated with Chabad. “Outside we were told a meteor had fallen from the space.”

Levitin uploaded photos of the Chelyabisnk synagogue’s stained-glass windows, which he said were shattered by the shock waves. The rabbi said one congregant was spared serious injury when a large shard of glass landed in his seat seconds after he went to the window to investigate the cause of the blast.

“It was a real miracle,” Levitin said, according to COL. Levitin said authorities were telling residents to stay indoors while they were investigating the incident.

A local government official said such incidents were extremely rare and Friday’s events might have been linked to an asteroid the size of an Olympic swimming pool due to pass earth. However, the European Space Agency on its Twitter account said its experts had confirmed there was no connection.

“There have never been any cases of meteorites breaking up at such a low level over Russia before,” said Yuri Burenko, head of the Chelyabinsk branch of the Emergencies Ministry.

Russia’s Emergencies Ministry said 514 people had sought medical help, mainly for light injuries caused by flying glass, and that 112 of them were kept in hospital.

But there may be even more. ABC news reported on Friday that the injury toll had topped 1,200 people.

Despite warnings not to approach any unidentified objects, some enterprising locals were hoping to cash in. “Selling meteorite that fell on Chelyabinsk!,” one prospective seller, Vladimir, said on a popular Russian auction website. He attached a picture of a black piece of stone that on Friday afternoon was priced at 1,488 roubles ($49.46).

The Emergencies Ministry described Friday’s events as a “meteor shower in the form of fireballs” and said background radiation levels were normal. It urged residents not to panic.

Simon Goodwin, an astrophysics expert from Britain’s University of Sheffield, said it was estimated between 1,000 and 10,000 tonnes of material rained down from space onto the earth every day, but most burned up in the atmosphere.

“While events this big are rare, an impact that could cause damage and death could happen every century or so,” he said. “Unfortunately there is absolutely nothing we can do to stop impacts.”

Thousands of Russian emergency workers went out on Saturday to clear up the damage from a meteor that exploded over the Ural mountains, damaging buildings, shattering windows and showering people with broken glass.

Divers searched a lake near the city of Chelyabinsk, where a hole several metres wide had opened in the ice, but had so far failed to find any large fragments, officials said.

The scarcity of evidence on the ground fuelled scores of conspiracy theories over what caused the fireball and its huge shockwave on Friday in the area which plays host to many defence industry plants.

Nationalist leader Vladimir Zhirinovsky told reporters in Moscow it could have been “war-mongers” in the United States. “It’s not meteors falling. It’s a new weapon being tested by the Americans,” he said.

A priest from near the explosion site called it an act of God. Social media sites were flooded with speculation about what might have caused the explosion.

“Honestly, I would be more inclined to believe that this was some military thing,” said Oksana Trufanova, a local human rights activist.

Asked about the speculation, an official at the local branch of Russia’s Emergencies Ministry simply replied: “Rubbish”.

Residents of Chelyabinsk, an industrial city 1,500 km (950 miles) east of Moscow, heard an explosion, saw a bright light and then felt a shockwave that blew out windows and damaged the wall and roof of a zinc plant.

The fireball traveling at a speed of 30 km (19 miles) per second according to Russian space agency Roscosmos, blazed across the horizon, leaving a long white trail visible as far as 200 km (125 miles) away.

NASA estimated the object was 55 feet (17 metres) across before entering Earth’s atmosphere and weighed about 10,000 tons.

It exploded miles above Earth, releasing nearly 500 kilotons of energy – about 30 times the size of the nuclear bomb dropped on the Japanese city of Hiroshima in World War Two, NASA added.

“We would expect an event of this magnitude to occur once every 100 years on average,” said Paul Chodas of NASA’s Near-Earth Object Program Office at the Jet Propulsion Laboratory in Pasadena, California.

“When you have a fireball of this size we would expect a large number of meteorites to reach the surface and in this case there were probably some large ones.”

Search teams said they had found small objects up to about 1 cm (half-an-inch) wide that might be fragments of a meteorite, but no larger pieces.

The Chelyabinsk regional governor said the strike caused about 1 billion roubles ($33 million) worth of damage.

Life in the city had largely returned to normal by Saturday although 50 people were still in hospital. Officials said more than 1,200 people were injured, mostly by flying glass.

Repair work had to be done quickly because of the freezing temperatures, which sank close to -20 degrees Celsius (-4 Fahrenheit) at night.

Emergencies Minister Vladimir Puchkov inspected the damage after President Vladimir Putin sent him to the region.

His ministry is under pressure to clean up fast following criticism over the failure to issue warnings in time before fatal flooding in southern Russia last summer and over its handling of forest fires in 2010.

Putin will also want to avoid a repeat of the criticism that he faced over his slow reaction to incidents early in his first term as president, such as the sinking of the Kursk submarine in 2000 which killed all 118 people on board.

Additional reporting from JTA and Reuters