Quinoa, Trendy South American Grain, May Not Be Kosher for Passover 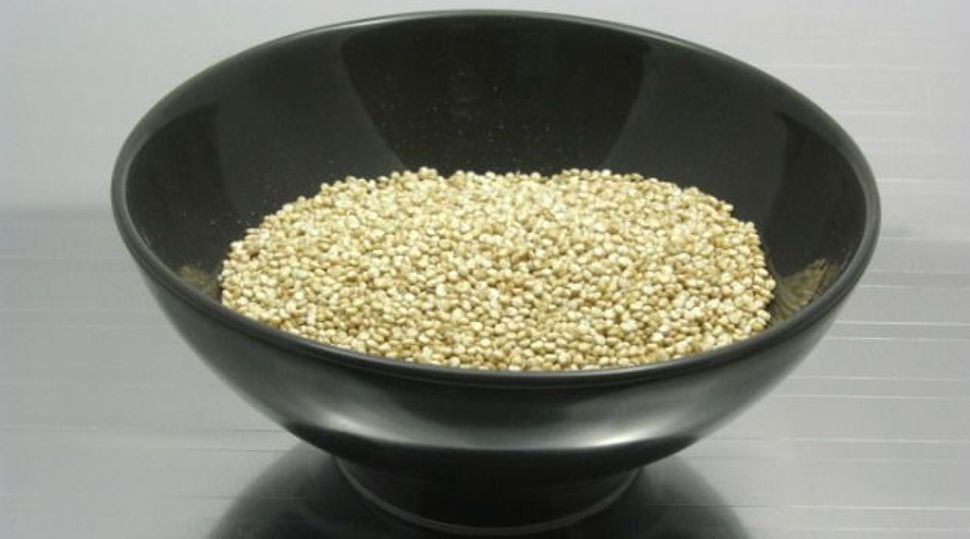 On any given day, a wind might blow through the farmlands of South America, pick up an errant grain of barley and deposit it nearby among the vast rows of cultivated quinoa. If that barley manages to make its way into a sifted batch of quinoa, and avoid detection during repackaging, it could wind up gracing your seder table on Passover night.

However dubious it might seem, the scenario is among the reasons that the world’s largest kosher certification agency is refusing to sanction quinoa for Passover consumption, potentially depriving Jewish consumers of a high-fiber, protein-rich staple that many have come to rely on during the weeklong holiday.

The Orthodox Union announced last year that it would not certify quinoa as kosher for Passover out of concern that quinoa falls into the category of kitniyot, a group of legumes forbidden because they look similar to grains proscribed on the holiday.

Menachem Genack, the CEO of O.U. Kosher, also cited the danger of quinoa crops grown in close proximity to wheat and barley fields.

Star-K, a rival kosher certification company based in Baltimore, has been certifying quinoa as Passover-friendly for years and dismisses what it sees as an outlandish prohibition.

“Rav Moshe Feinstein said we weren’t to add on to the rules of kitniyot, so I don’t know why anyone would,” said Rabbi Tzvi Rosen of Star-K, referring to the esteemed decisor of Jewish religious law who died in 1986. “And what’s more telling of this ridiculous debate is that quinoa is a seed, not a legume.”

Long a staple of the Andean diet, quinoa has earned a reputation as “the mother of all grains,” celebrated for its high nutrient quality and as an alternative for those following a gluten-free diet. But quinoa is not a grain at all. It’s a member of the goosefoot family, and closely related to spinach and beets.

On Passover – when wheat, oats, rye, spelt and barley are all prohibited – quinoa has emerged as a popular substitute.

That could change, however, with the world’s major kosher certifier refusing to give quinoa its Passover seal of approval.

“We can’t certify quinoa because it looks like a grain and people might get confused,” Genack said. “It’s a disputed food, so we can’t hold an opinion, and we don’t certify it. Those who rely on the O.U. for a kashrut just won’t have quinoa on Passover.”

The O.U.’s non-endorsement is the result of a debate within the organization’s own ranks.

Rabbi Yisroel Belsky, the head of Brooklyn’s Yeshiva Torah Vodaas and a consulting rabbi for the O.U., maintains that quinoa qualifies as kitniyot because it’s used in a manner similar to forbidden grains. Rabbi Hershel Schachter, one of the heads of Yeshiva University’s rabbinical school and also an O.U. consultant, agrees with Rosen that the category of kitniyot should not be expanded.

Rosen said the Star-K certifies only the quinoa that has no other grains growing nearby. This year, for the first time, the company sent supervisors to South America to supervise the harvesting, sifting and packaging of the product.

“Whenever there’s a new age food, there’s always a fight between kosher factions,” Rosen said. “But we should be worrying about other things, like all the cookies, pizzas and noodles that are Passover certified but appear to be chametz. Quinoa is the least of our problems.”

The O.U. is recommending that kosher consumers look to their local rabbis for guidance on the quinoa question. But for Eve Becker, risking a rabbinic prohibition on a staple food probably won’t sit too well in her house. A Jewish food blogger who maintains a strictly gluten-free kitchen because her daughter has Celiac disease, Becker said quinoa is one of the most important foods.

“It’s a tiny powerhouse packed with protein, vitamins and minerals, and it’s an important grain alternative, especially on Passover,” Becker said. “It’s great to have it on Passover instead of the usual potatoes, potatoes, potatoes. Most of the Passover foods just end up tasting like Passover, so we rely on quinoa to be that side staple.”

Ilana S., a mother of two who lives on Manhattan’s Upper West Side, said she trusts the O.U. and will refrain, begrudgingly, from buying quinoa this Passover.

“These rabbis are always changing their minds, so I’m confident they’ll have a new statement next year,” she said. “Until then, its only eight days.”

Quinoa, Trendy South American Grain, May Not Be Kosher for Passover