Beth Hamedrash Hagodol Synagogue Has Change of Heart About Demolition 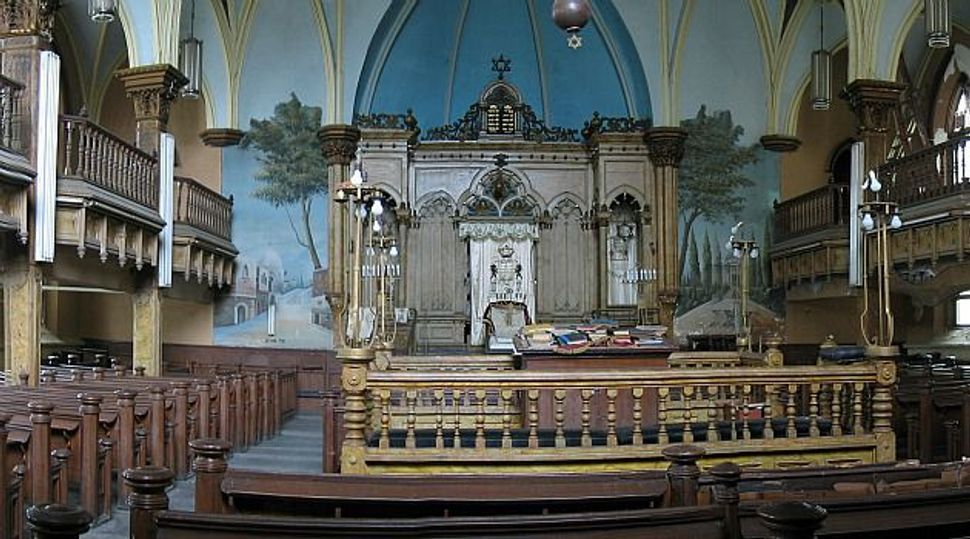 Old and Ornate: The leadership of Congregation Beth Hamedrash Hagadol had said its structure has deteriorated beyond repair. Now, it?s had a change of heart. Image by paul berger

The synagogue that wanted to demolish itself has had a change of heart.

The leadership of Beth Hamedrash Hagodol, a historic 163-year-old synagogue on Manhattan’s Lower East Side, has suspended a request it had filed with the New York City Landmarks Preservation Commission to reverse its landmark status, a move that could have paved the way for the building’s demolition.

“We’ll definitely take a deeper look, and try to work it out,” Rabbi Mendl Greenbaum said. “We just know one thing: It will work so that we should be able to make the shul function and try to save the building.”

The synagogue, which has a dwindling membership of fewer than 20, plans to recruit an independent engineer to re-evaluate the building’s structural outlook. It will then reopen the door to potential partners, such as educational institutions, that can envision an adaptive reuse of the building.

The option to demolish will be off the table, at least until June.

“To be quite honest,” Greenbaum said, “we don’t know what opportunities are there.“

Neighborhood groups have reacted with delight to the rabbi’s about-face.

“I’m very happy,” said Holly Kaye, founding executive director of the Lower East Side Jewish Conservancy. In the past, Kaye expressed deep concern with the synagogue’s direction under the leadership of Greenbaum. The two had a long chat on March 6, which may have prompted the new decision.

“He did a 180 turnaround,” Kaye said, “and has asked that we work together… to try and find a partner for him so that we can try and preserve the building.”

The unusual application to the landmarks commission would have allowed the congregation to demolish its building and replace it with a new development — including a sanctuary, a museum and space for residential use. The proposal has been a significant source of disquiet among neighborhood preservationists since it was submitted to city authorities three months ago.

Originally consecrated as a Baptist church, the building at 60 Norfolk Street that now houses Beth Hamedrash was bought in 1885 and converted into a synagogue. It is the oldest Russian Jewish congregation in the United States.

Even though its membership currently hovers in the teens, locals have long held the synagogue as an incalculably valuable cultural and religious artifact. Particularly in the past decade, reports of progressive damage to the building have been met with disappointment and alarm.

These feelings were mixed with a heavy dose of cynicism, as grants for repairs from various historic preservation agencies, totaling $1 million, went unused and were eventually rescinded.

Onlookers murmured about the ever-rising value of real estate in the neighborhood, and a few suggested that the idea for a residential space in the building was connected to its proximity to Seward Park, which received approval for a lucrative mixed-use development last October. In an email published by The Lo-Down, a community newspaper based on the Lower East Side, a group called Friends of the Lower East Side described the plight of Beth Hamedrash as a case of “demolition by neglect.”

Beth Hamedrash Hagodol Synagogue Has Change of Heart About Demolition