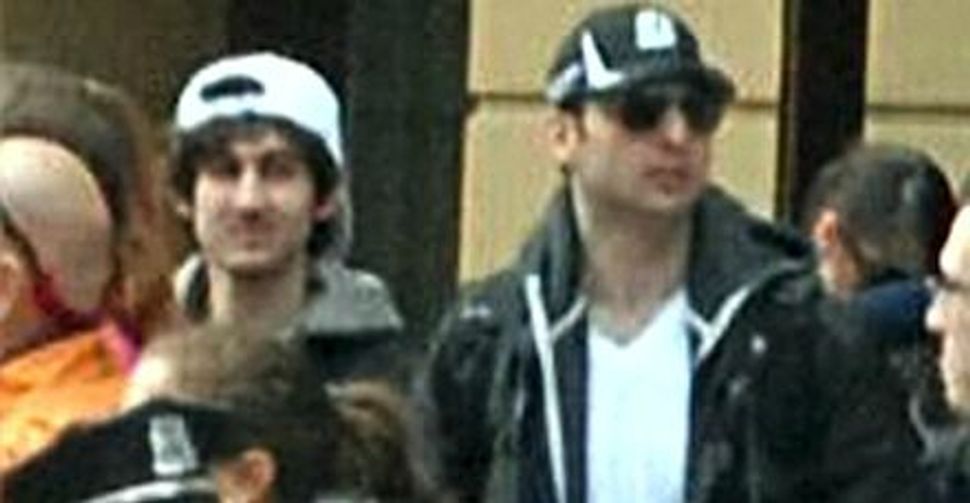 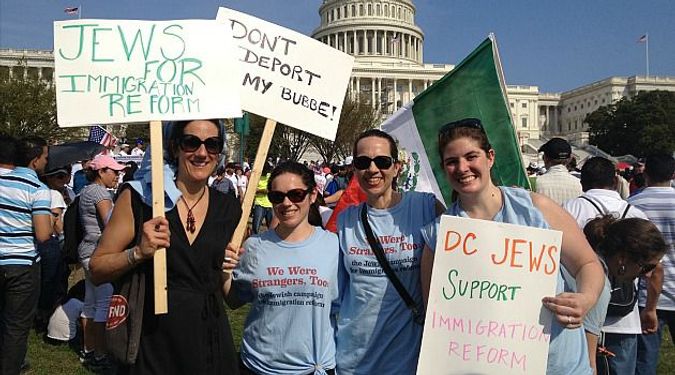 Shifting Debate: Jewish activists join demonstration in Washington for immigration reform. Has the Boston bombing left an indelible mark on the debate? Image by fbi

Jewish activists are worried that shock waves from the Boston Marathon terrorist attack could delay Congressional action on a long-sought immigration reform package — and endanger a provision on asylum.

The Hebrew Immigrant Aid Society has been urging lawmakers to include a provision in the reform legislation that would extend filing deadlines for immigrants seeking political asylum in the United States. But the group’s task may be complicated by the emergence of two ethnic Chechen brothers as terrorist suspects who were first admitted into the country as part of a family of political asylum seekers.

“Of course, HIAS is worried that immigration restrictionists have already started to exploit the Boston tragedy in a manipulative effort to thwart immigration as well as asylum reform,” said Mark Hetfield, president and CEO of HIAS, the leading Jewish advocacy group for immigrants.

Hetfield countered that among the 11 million undocumented immigrants are refugees who missed the asylum filing deadline, and that comprehensive immigration reform would “bring them out of the shadows” and make America more secure.

Currently, visitors who arrive here and decide to seek asylum as political refugees must apply for this status within 12 months. HIAS argues that individuals fleeing persecution should be allowed a longer period of time to file for asylum before being deported to the countries from which they fled.

It is a small detail in a massive set of rules and procedures offered in the reform, but dealing with any asylum issue in the post-Boston environment has become somewhat more difficult.

The Tsarnaev brothers, suspected of carrying out the April 15 attacks, entered America on an asylum visa after their parents convinced authorities that as Muslim Chechens they would face persecution from the Russian authorities. Critics, including Kentucky Republican Senator Rand Paul, have tied the Tsarnaevs’ entry into the United States as asylum seekers to the broader question of immigration reform.

“Why did the current system allow two individuals to immigrate to the United States from the Chechen Republic in Russia – an area known as a hotbed of Islamic extremism — who then committed acts of terrorism?” Paul asked in an April 22 Senate hearing.

Paul’s question rests on assumptions that are arguably inaccurate or lacking in context. Tamerlan and Dzhokhar Tsarnaev were granted asylum as young children in 2002 based on the government’s approval of their parents’ request. There has been no indication that their parents — the asylum applicants — harbored any extremist sympathies. Nevertheless, the discussion has raised questions about the asylum process.

“It might make a difference politically, because of people’s knee-jerk reaction,” said Hetfield. But he argued that the Boston attack could, in fact, highlight the need for reform that would close immigration loopholes and ensure background checks for all. “Security and immigration reform are not mutually exclusive,” he said. “In fact, you can’t have security without immigration reform.”

Still the effort by immigration reform opponents to shift attention to security aspects of the issue could resonate with the Jewish community. It is a community known, on the one hand, for its strong support for welcoming immigrants, but on the other hand for its sensitivity to security concerns, especially when related to Islamic extremism.

“I’m more skeptical of [immigration reform] now than I was six or seven months ago,” said William Kristol, editor of The Weekly Standard, in an interview with Fox News. He suggested that “before we move ahead with 880 pages of immigration reform,” a closer look should be given to security lapses such as those revealed in dealing with the Tsarnaev brothers.

Hetfield, making the case for easing asylum procedures, noted that the brothers did not abuse the asylum system. He stressed that asylum seekers undergo strict background checks before being allowed to stay in the United States.

Pro-immigration advocates in the Jewish community believe that these questions and similar concerns over entry of extremists to the United States will not weaken Jewish determination to see immigration laws fixed. “We’re a smart community, and we all understand it will make everyone more secure,” said Deborah Lauter, director of civil rights at the Anti-Defamation League.

An April 22 hearing at the Senate Judiciary Committee over a proposed comprehensive immigration bill made clear that the Boston attack and its aftermath now loom large over the discussion. A heated debate erupted as Chuck Schumer, a Jewish New York Senator who is among the authors of the bill, accused Republicans of pointing to the Boston attack as “an excuse for not doing a bill or delaying it for many months.” The statement led to a harsh response from Iowa Republican Chuck Grassley, who had said earlier that immigration reforms should be carried out carefully, in light of the Boston terror attack.

“The fact is that this issue will now be present in the debate, but it is hard to say if it will change the structure of the legislation,” said Audrey Singer, an immigration expert at the Brookings Institution. She noted that following the November 2012 elections, focus shifted away from security aspects of immigration and toward the potential economic benefits of overhauling a system that has failed to deal with America’s immigration needs. “Boston,” she said, “shifted back the focus and allowed those who have this point of view to be more vocal.”

The bill, compiled by a bipartisan group of senators known as the “gang of eight,” requires beefing up border security to meet specific criteria of preventing illegal crossing, followed by establishing a path to citizenship for an estimated 12 million undocumented workers currently living in the United States. It also provides more legal opportunities for high-skill and low-skill workers to come to America.

Following the GOP’s defeat in the 2012 elections, which was attributed in part to the loss of the Latino electorate, Republicans have moved towards support for immigration reform. But still, not all in the party accept the notion of a path to legalization for undocumented workers. Pro-immigration advocates expressed optimism regarding the chances of reform legislation passing in the Senate. But a House version has yet to be introduced, and the battle there could be tougher. The White House has indicated that it would like to see the reform approved this summer.

For the Jewish community, immigration reform has always been an easy sell. Driven by a collective memory of earlier generations reaching America’s shores at the turn of the 20th century, the organized Jewish community has for years maintained a strong sentiment favoring welcoming immigration policy. For the current debate, Jewish groups formed the We Were Strangers Too coalition, comprising national Jewish organizations as well as local groups and synagogue denominations.

While all members of the coalition support the call for reform, some are pushing for specific amendments and provisions reflecting their Jewish interests and values. HIAS has asked lawmakers to permanently designate Iranian religious minorities, including Jews, as eligible for refugee resettlement in the United States, thus easing their processing overseas. Currently there are an estimated 700 Iranian Jews waiting to immigrate to America. The Reform movement would like to see the bill “improve family reunification procedures to include siblings, adult children and spouses of all genders.” And Bend the Arc, a progressive Jewish organization, is advocating equal rights for same-sex couples undergoing immigration procedures.

Public opinion polls show strong support among rank-and-file members of the Jewish community for a more open immigration policy, although this sentiment is not as strong among older and Republican Jews. A 2009 poll, however, also showed significant concern among American Jews over inadequate enforcement of immigration laws.

Critics of immigration reform feel that the Boston events could potentially chip away at Jewish support for the move by making the connection between a lenient immigration policy and an increase in the threat of terrorism.

“The Boston terror attacks will have a very substantial bearing on the issue and will increase public apprehension toward amnesty,” said Stephen Steinlight, senior policy analyst at the Center for Immigration Studies, a think tank opposed to immigration reform.

Steinlight, who formerly served as the American Jewish Committee’s director of national affairs, argued that the Boston Marathon attack made people understand how inept the federal government is at screening for terrorists. “This should be a serious concern for the Jewish community,” he said. “It is critical that America remains a safe place for Jews.”

Hetfield reached an opposite conclusion. He believes that only a process of legalization for those already in the country illegally will put an end to an existent “underground” made up of millions of immigrants who fear any contact with authorities. Such a process, he said, would help the government in identifying extreme elements who have entered, or might seek to enter, America.