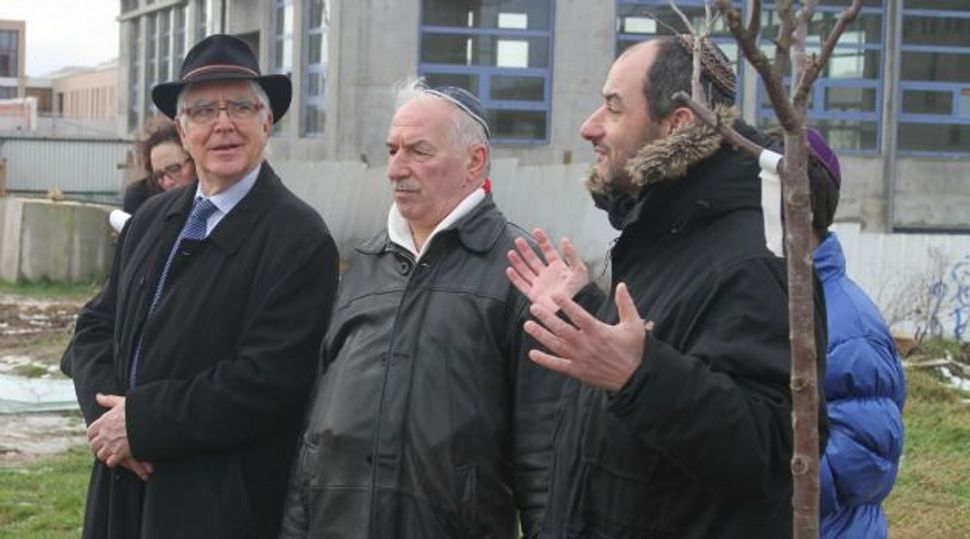 Faithful Experiment: Jews are joined by leaders of other faiths at a Tu B?Shvat tree-planting ceremony in the Paris suburb of Bussy-Saint-Georges. Image by getty images

A knot of about 100 people stood under a steely winter sky January 26 to plant a tree for Tu B’Shvat in the Paris suburb of Bussy-Saint-Georges.

The town’s 120-family strong Jewish community was out in force for the celebration, which mirrored similar rites held around the world. Here, however, a few things stood out as different: a delegation of brightly dressed Buddhist nuns, the Taiwanese ambassador to France, two Catholic priests and a large mosque under construction next door.

The diverse gathering reflects an unusual and inspirational multi-faith experiment in Bussy-Saint-Georges, an otherwise run-of-the-mill French suburb of 25,000 that has sprung up from farmland 20 miles east of Paris.

Jews have joined Muslims, Catholics and Buddhists in planning a sprawling “Esplanade of the Religions” that will include houses of worship from each of the faiths.

“In France you put a bar of separation between yourself and your neighbors,” said Guy Benarousse, an Algerian Jew who has served as the local rabbi since he moved his family to Bussy in 2005. “Here, we’re going to show everyone how to live together.”

Still in its infancy, the campus could serve as a model for multi-faith cooperation in France, which has been beset by intolerance toward religious minorities and also has a strong secular tradition of avoiding government involvement in any religious projects.

The unspoken question of whether or not Jews and Muslims might be at odds was addressed head on by an unusual request from Benarousse. He demanded that the nascent community reflect the one he left in North Africa: Jews and Muslims living side by side.

“As a symbol, I asked that the mosque be built next door to the synagogue, “ he said. “The point is to say, ‘We can disagree, but we have to talk to each other.’”

Farid Chaoui, vice president of the Muslim community association TAWBA, agrees. “There have been no problems — on the contrary! Jews and Muslims, especially in North Africa, lived for centuries together.” Chaoui, 58, also from Algeria, added that he and Benarousse often reminisce together. “We joke that we’re cousins,” he said.

Bussy may at first seem like an unlikely place to serve as a “laboratory of tolerance,” as the town’s mayor puts it.

The town had just 500 residents in 1988, when the French government sought to expand suburbs in the outer reaches of the metro area by buying up farmland for housing. It has grown rapidly in recent years, driven mostly by the rising cost of housing within easy access of Paris.

The Esplanade is mostly the brainchild of Hugues Rondeau, the town’s mayor since 1998. Rondeau, a Catholic, is no ordinary French public servant. His view of laïcité, the strict doctrine of separation of church and state, is more nuanced than most.

“The ‘Esplanade of the Religions’ comes from my intuition that the state should not stand in the way of faith because of intransigent secularization,” said Rondeau, 45. “The state must accompany religion to enable a kind of social peace.”

Growing up in a conservative French family (“We didn’t have Jewish friends,” he said), the mayor was not an obvious champion of inter-communal tolerance. But he has developed a particular sensitivity to the needs of other faith communities — especially Jews, who make up the smallest minority in the town.

“I wanted to show the Jewish community of Bussy that I appreciated their presence,” he said.

The road to acceptance hasn’t been smooth for Jews, who started moving out to the bedroom community in the early 1990s, along with Muslims and other native-born French residents.

In the absence of an established Jewish community, the residents have had to make do. When Miriam Rosilio, 49, moved to Bussy in 1993, there were virtually no Jews to speak of. Her two children were toddlers at the time, and she desperately sought to give them some sort of Jewish education. After finding out that another Jewish family with two children lived in the same building — a “total coincidence!” — Rosilio started hosting Hebrew school in her living room.

“We had to bring in a tutor from Paris, who would travel to our house on Sunday mornings,” she said, looking back. Seven years later, after attending an event hosted by the city, Rosilio realized she wasn’t alone. “We realized there were all these Jews in Bussy,” she said. “We had no idea.”

As a result, Miriam and Michel Rosilio, 48, founded Association J’Buss, the local Jewish association, which Michel Rosilio went on to lead until last year. There are still no Jewish day schools in Bussy. But Sunday Hebrew school is now held in a synagogue, housed in a prefabricated trailer and taught by a rabbi.

Once the Esplanade is complete, each faith community will have its own place of worship, including the mosque, a Laotian Buddhist pagoda, a new synagogue and a $20 million Taiwanese Buddhist temple. A Catholic church already stands adjacent to the planned holy quarter.

Rondeau admitted that some locals had misgivings about the plan. “Some people were worried that I was creating a religious supermarket,” he said. “It’s not because you have a synagogue next door that the rabbi is going to ring your doorbell and try to convert you.”

Despite the inspirational promise of this project, the Jewish community’s full participation is threatened by a more mundane concern: financing.

Jewish leaders have played a prominent part in the planning, but they have raised only 10% of the 1 million euros needed for construction of the synagogue. Meanwhile, the Taiwanese temple already stands tall, and the Muslim community has broken ground on its mosque.

“We’re falling behind the others because we’re a smaller community,” explained Claude Windisch, current president of J’Buss. “The Jewish community in France hasn’t yet understood the importance of what we’re trying to do here. It’s a project that goes beyond Bussy-Saint-Georges.”

After meeting formally at the Tu B’Shvat ceremony, the Taiwanese ambassador to France extended a formal invitation to Windisch and Benarousse to visit the Jewish community in Taipei to discuss fundraising for the project. They hope to mount a fundraising trip to New York, but that remains a pipe dream for now.

Despite the logistical setbacks, Benarousse remains positive about the future of Jews in Bussy and their role in the Esplanade. Even if it takes time to build a new synagogue, Rondeau says it is crucial that the Jewish community have a visible place in the town.

“When you have a synagogue, it means your community exists,” the mayor said. “In this population of 25,000, there are Jews.”