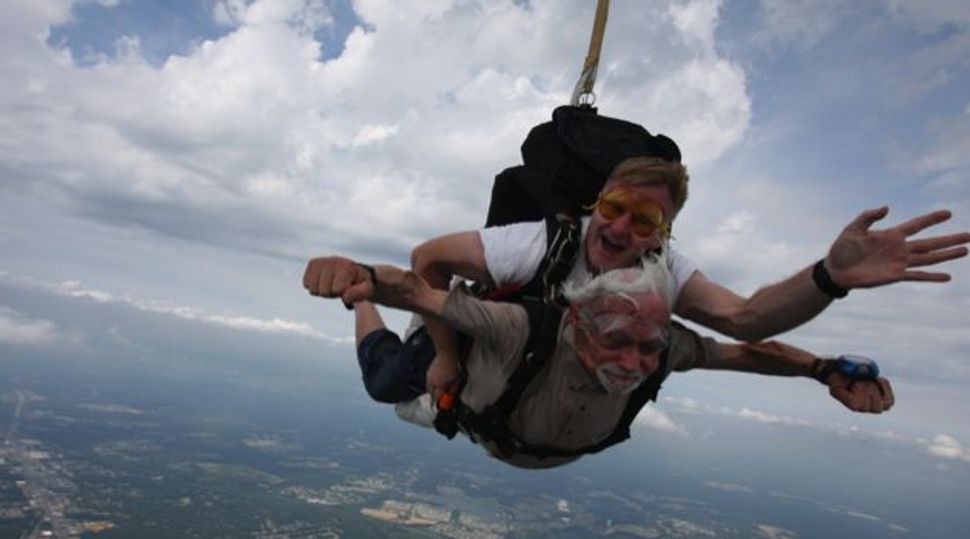 There won’t be any skydiving for 92-year-old Aaron Rosloff this year.

He spent his past two birthdays jumping out of planes as part of a fundraising mission for the South Brunswick Food Pantry in New Jersey.

He planned to celebrate his 92nd birthday, July 3, with a third jump, but after he broke his ankle in two places during last year’s landing, friends and family pleaded with him not to skydive again. The charity flipped: Instead of raising money for Rosloff to jump, people were donating for him to stay grounded.

“It started out somewhat as a joke,” said Robert Wolkoff, the rabbi at Congregation B’nai Tikvah, a conservative synagogue in North Brunswick, N.J., where Rosloff is a founding member. “I told him, ‘I’ll give you $100 if you jump, but I’ll give you $200 not to jump.’”

Rosloff and my family all belong to B’nai Tikvah. I spent a healthy chunk of my childhood there, but I never met Rosloff until June, after B’nai Tikvah launched the Stop Aaron campaign, which collected nearly $5,000 in donations for 2013.

“I’m honored people care about me enough that they don’t want me to jump. I might break my ankle again,” Rosloff told me when I met him in the South Brunswick ranch house he’s lived in since 1959.

Rosloff sports a trimmed goatee and speaks in a jolly rasp. In person he looks at least 10 years younger than his age, probably because of a daily fitness regimen that includes push-ups, sit-ups, crunches, bicycle kicks and shadow boxing. He still drives, although no longer at night.

When I asked Rosloff if he donates to any other charities, he laughed and showed me a pink notebook. Inside he lists every contribution he’s made since 2000. Many of the donations are for $10 or $15, spread around to dozens of charities, from the American Red Cross to the International Fellowship of Christians and Jews, a philanthropic organization that promotes interfaith support for Israel. He tries to send out at least 20 donations per month. His skydiving fundraisers have provided more than $7,000 for the South Brunswick Food Pantry since 2011.

Rosloff’s commitment to giving back was honed over his lifetime. He cites three stories told to him over the years that helped shape his current philanthropic philosophy: his brother Reuben giving up his dress shoes during World War II to a Frenchman who had no money; his brother Joe, who opened a medical laboratory after the Korean War, allowing poor patients to use his services for 50 cents per visit, and his grandmother, who became a bootlegger during the Great Depression, buying necessities for the poor even when she couldn’t afford them. 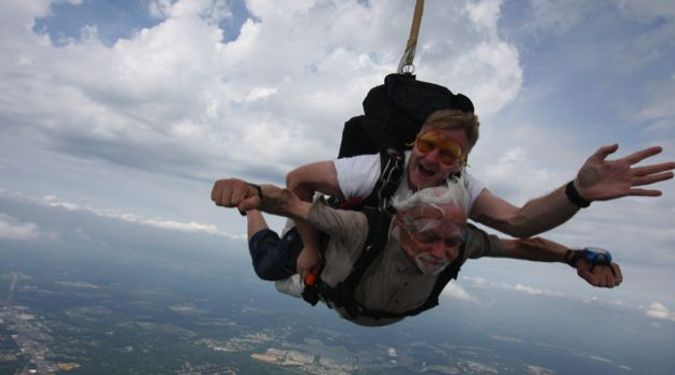 “Tikkun olam, to heal the world” Rosloff said. “Care for the widow, the orphan, the elderly, the poor and the stranger in your midst. That’s what I try to do.”

Rosloff is a widower himself, and any retelling of his life would be incomplete without mention of his late wife, Milie Rosloff. They were together for 62 years, had three children and seemed to share an appreciation for grassroots organizational skills. Rosloff told of how his wife, who worked as a paraprofessional, found out that her colleagues were getting paid less than New Jersey’s minimum wage. She campaigned to the board of education, eventually securing higher wages and full benefits.

It was his wife who originally prevented Rosloff from skydiving. He had served as a crew chief in the Army Air Corps during WWII, always interested in jumping. “She told me, ‘You can go, but I won’t be here even if you get back,” Rosloff said with a smirk.

Milie Rosloff suffered from a degenerative brain disease for the past five years of their marriage. It was “complete hell to see her deteriorate,” Rosloff said. She passed away in 2005. “It’s rare for people to be together that long. I still miss her every day.”

Six years later, Rosloff felt like the time was right to take the plunge. In 2011, at age 90, he leaped from 8,000 feet on an overcast day without any apprehension. The next year, when he broke his ankle, Rosloff took off from 13,500 feet.

“I still loved the experience,” he recalled with a smile. “You get to see the world as a ball from up above.”

Since retiring from his insurance and real estate firm in the early 1980s, Rosloff helped establish B’nai Tikvah in 1983, served as a founding board member of the low-income Oak Woods Senior Residence and now writes a regular column for Hakol, B’nai Tikvah’s monthly newsletter.

Rosloff’s columns are a way for the congregation to get to know the man behind the fundraising. For example, in the June column, Rosloff revealed how holding the Torah soon after his mother’s death, in 1959, sparked a visceral reaction to Judaism that has stayed with him. “I felt a physical and emotional relationship to the Torah,” he writes, “as though I was holding my mother in my arms.” He told me that before his mother passed away, he attended synagogue occasionally, but never considered himself religious.

Wolkoff said that Rosloff is from the greatest generation: “Risking everything for a noble cause, that’s just what they do.”

Wolkoff joked that the old adage is wrong. “In this case, you can keep a man down,” he said. For a good cause, at least.

Jordan Teicher lives in New York City. He has written for The Wall Street Journal, Slate and Vice.