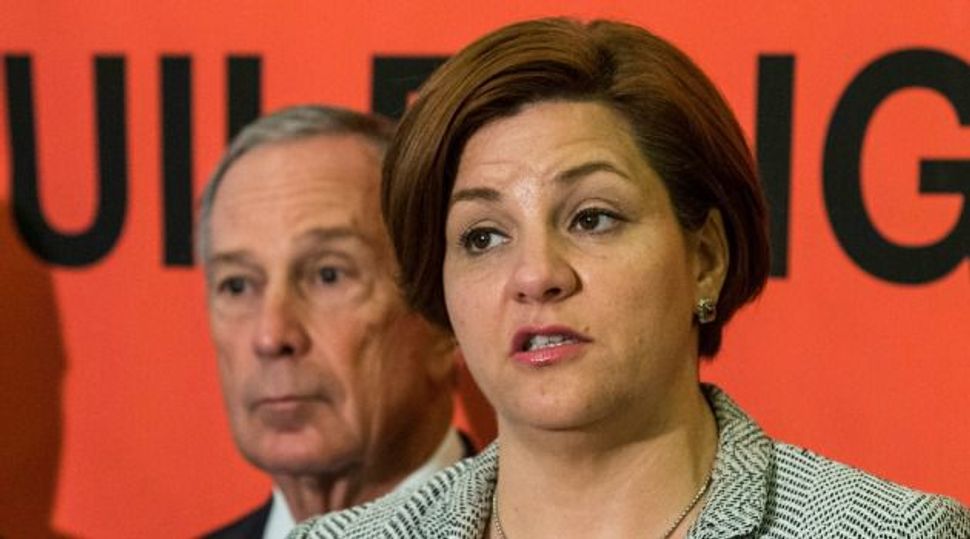 Quinn drew applause with comments on key issues like school aid and special education in a speech to a group of communal and religious school leaders in the Manhattan offices of the Orthodox Union on July 10.

“There are areas, we all know this, where the government cannot get involved in non-public education. But then there are areas that we can,” Quinn said, when asked whether the city could pay for security guards at private religious schools. “We would like to work with all of you and others to figure that out and see what can be done,” Quinn said.

Once the leading candidate in a dense field of Democratic contenders, Quinn, the City Council Speaker, has lately faced increased pressure from late comer Anthony Weiner. Modern Orthodox Jews, like those represented by the Orthodox Union, have yet to coalesce around a preferred mayoral candidate.

Quinn spoke over sandwich wraps and sushi at a lunch meeting of roughly 40 guests of the O.U.’s advocacy arm, including representatives from the Sephardic Community Federation, a largely Syrian-Jewish group. David Greenfield, a Democratic member of the New York City Council representing heavily Orthodox neighborhoods in Brooklyn, introduced Quinn. Greenfield has not endorsed anyone in the mayor’s race.

“She got a very warm reception today,” Greenfield told the Forward.

Quinn spoke for roughly fifteen minutes in a session closed to the press and then took questions on the record.

In one exchange, Quinn said that she hoped to reform the approval process for parents requesting public funding for special education services for their children outside of the public school system.

“I want to move away, very clearly away, from forcing special needs parents into court,” Quinn said.

A spokesman for the Quinn campaign said that Quinn is in ongoing conversations with the city’s education department to change the process on a city level, though details of a new plan were unclear.

The proposal appears to share some elements with a bill that passed the state legislature last year with the backing of the ultra-Orthodox Agudath Israel that would have dropped the requirement for annual hearings to review special education placements. The bill, which had additional elements designed to make it easier to place Orthodox special needs students in private schools, was vetoed by Cuomo amidst strong opposition from school board advocates.

“Her commitment would make that bill moot,” said Greenfield of Quinn’s plan to change the special education placement approval system.

Quinn said that she did not support a voucher-like tuition assistance program for private religious schools, an initiative backed by some Orthodox advocates that poses likely conflicts with state and federal law.

Quinn also said she would look into security guards for private religious schools. And she took credit for a city law passed when she was chair of the City Council’s Health Committee in 2006 that provides city-funded nurses to private schools.

“On these issues she certainly has expressed a willingness to be supportive,” Greenfield said.

Quinn rival Anthony Weiner could be making a play for the same support. As part of set of proposals rolled out the same day as Quinn’s meeting with the OU, Weiner said that he would boost the clout within the city’s education bureaucracy of the city office that administers aid to non-public schools. Though the proposal was made in the context of helping struggling Catholic schools, the plan could help boost Weiner’s appeal among segments of the Jewish community, where his backing has been weak.

Also at the OU event, Quinn said in response to a reporter’s query that the question of the West Bank’s status was “broad.”

A follow-up statement from Quinn’s office was also less than clear.

“Chris believes the West Bank is a disputed territory and that the Israelis and Palestinians must sit down and negotiate a solution,” the statement read.

The United States, the United Nations, and the international community considers Israel to have occupied the West Bank and East Jerusalem in 1967. Israel itself prefers the term “disputed.”