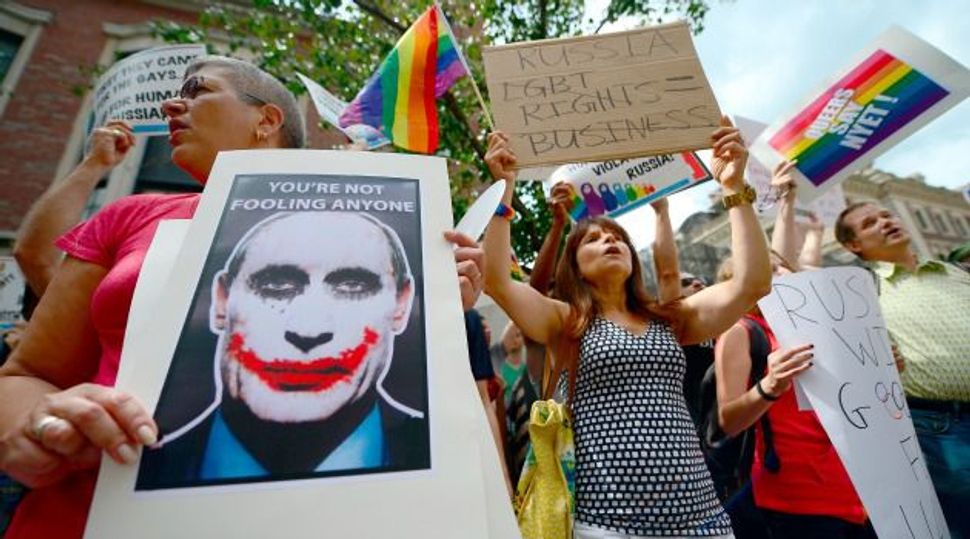 Gay Rights: Protesters hold a demonstration against Russian anti-gay legislation in front of the Russian Consulate in New York on July 31. They want the Russian government to repeal the anti-gay propoganda law before the 2014 Winter Olympics in Sochi. Image by Getty Images

Russia’s lesbian, gay, bisexual and transgender community has a new and powerful champion in the organized Jewish world. Abraham Foxman, national director of the Anti-Defamation League, has called on the American Jewish community and on the government of the United States to pressure Russia on gay and lesbian rights.

Foxman called on Congress to enact a bill that would mimic the legendary Jackson-Vanik amendment created to help Jews in the former Soviet Union, amid a growing controversy over Russia’s recent law banning “propaganda on nontraditional sexual relationships.”

“Taking bold action for the rights of LGBT communities to live in security and dignity will promote human rights for all,” Foxman wrote in The Huffington Post on August 16. “The Soviet Jewry movement provides both a model and inspiration.”

The Jackson-Vanik amendment to the Trade Act of 1974, signed into law by President Gerald Ford, imposed trade sanctions on the Soviet Union over its refusal to allow Jews to emigrate. Although the majority of Soviet Jews remained trapped behind the Iron Curtain for almost two more decades, the legislation was seen as a victory because it forced the Soviets to contend with the issue of Jewish emigration if they wanted to develop relations with the United States.

Maryland Senator Ben Cardin and New York Rep. Eliot Engel, both Democrats, told the Forward that they supported Foxman’s call for political action. They said that although legislation on the scale of Jackson-Vanik is impossible today, they would explore political means of pressuring Russia to protect LGBT rights. But the American Jewish Committee and B’nai B’rith International, seen as foreign policy leaders in the community, although critical of Russian discrimination against the LGBT community, declined to comment on Foxman’s proposal.

Larry Grossman, a spokesman for the AJC, said his organization could not comment on Foxman’s plan because “it’s not something we’ve discussed.” Sharon Bender, a spokeswoman for B’nai B’rith, said, “There are too many unknowns for how this might be accomplished for us to comment.”

The Jewish Council for Public Affairs and the National Conference Supporting Jews in Russia, both umbrella organizations, said they needed to poll member groups before they could commit to a position.

“We will certainly not refrain from condemning the legislation in Russia and asking that the United States use its diplomatic leverage with Russia to try to address this issue,” said Martin Raffel, the JCPA’s senior vice president. “Whether or not we should be using other tools, like a Jackson-Vanik type legislation, to respond is something I think we need to look at a bit more carefully.”

Although they would not say it, JCPA and NCSJ may be hamstrung by more Orthodox member organizations that do not support LGBT rights. [To clarify, Raffel told the Forward August 22 that the JCPA did not express any reservation in regard to Orthodox member groups and stressed that additional time was needed to determine whether a consensus exists for the ADL’s proposal.”] But other groups, such as the AJC and B’nai B’rith, could be acting cautiously because they were blindsided, and remain confused, by Foxman’s idea.

“My initial response was to be puzzled by it,” said Rabbi Eric Yoffie, former president of the Union for Reform Judaism. Yoffie said LGBT rights was “a matter of deep principle” for him. Yet he remained confused about how Foxman’s proposed legislation might work. Yoffie added that there are other parts of the world where anti-gay discrimination is much worse than in Russia.

“I need more information here and a strategic approach that makes sense to me,” Yoffie said. He added that groups such as the AJC might be sympathetic, but they may ”want to think through how you proceed” before lending their voice to the ADL’s call.

Russia’s June anti-gay law focused international attention on the plight of the country’s LGBT community, which has been under siege for years. Such scrutiny has been magnified by the upcoming Winter Olympics, to be held in Russia’s Black Sea resort of Sochi in 2014.

LGBT activists question whether the law could affect visiting athletes and spectators. Some have called for a boycott of the Olympics. On August 9, President Obama said he opposed such a boycott. “Nobody is more offended than me by some of the anti-gay and lesbian legislation than you’ve been seeing in Russia,” he added.

Russian officials stress that the law does not criminalize homosexuality. LGBT campaigners say it is so vague that it could even criminalize a teacher or parent telling a child that it is okay to be gay.

Such fears are set against a backdrop of widespread anti-gay feeling in Russia. A recent poll found that 88% of Russians are supportive of the new law.

In recent months, Russian police have stood by while youths attacked LGBT campaigners. Across the country, small groups of thugs calling themselves Occupy Pedophilia have been responsible for dozens of violent attacks on gay men that are filmed and then posted to YouTube or to a Russian social networking site, VKontakte.

Jay Michaelson, a Jewish LGBT activist in the United States, said that the beating of gay men in Russia should serve as a “wake-up call to the Jewish community” that anti-gay violence in Russia stems from the same ultra-nationalism that feeds Russian anti-Semitism.

Although the ADL is best known for its work combatting anti-Semitism, it also works for LGBT rights. A spokesman, David Robbins, said the ADL has initiated hate crime legislation in many American states and fought for including hate crimes against gays and lesbians in such legislation.

Michaelson, a vice president at the Arcus Foundation, which funds LGBT causes around the world, is helping coordinate efforts of American and Russian LGBT activists, including the ADL, to pressure Russia on its LGBT record.

Michaelson. who is also a columnist for the Forward, said the ADL “has been doing great work on [LGBT issues] for years.” Nevertheless, he added that American-Jewish groups are right to be cautious of Foxman’s proposal for congressional action. “If you listen to Russian LGBT activists, they’re not sure a hostile American governmental reaction will help,” Michaelson said.

He added that American political pressure might have little effect in Russia. Worse, it could play into Russia’s depiction of itself as an alternative to American decadence and a bastion of “traditional values and morality.”

Because the United States and Russia are members of the World Trade Organization, America cannot impose economic sanctions on Russia as it did with Jackson-Vanik. However, Foxman suggested that legislation similar to the Magnitsky Act, a 2012 law that imposed sanctions on about two dozen Russians accused of human rights violations, might be possible.

Engel, the ranking Democrat on the House Committee on Foreign Affairs, said it would be difficult to pass such legislation in the Republican-controlled House. “Republicans have not been among the strongest supporters of LGBT rights,” Engel said.

Rep. Dana Rohrabacher, a California Republican and a member of the House foreign affairs committee, agreed that such legislation had little hope of passing.

Rohrabacher said that although he had sympathy for Russian LGBT victims of repression, theirs was a “minuscule issue” compared with political and religious oppression and human rights violations in other parts of the world, such as China and countries governed by Islamic law. “Are we going to [call for similar legislation against] all these Muslim countries that also repress gays and people of other faiths?” Rohrabacher said.