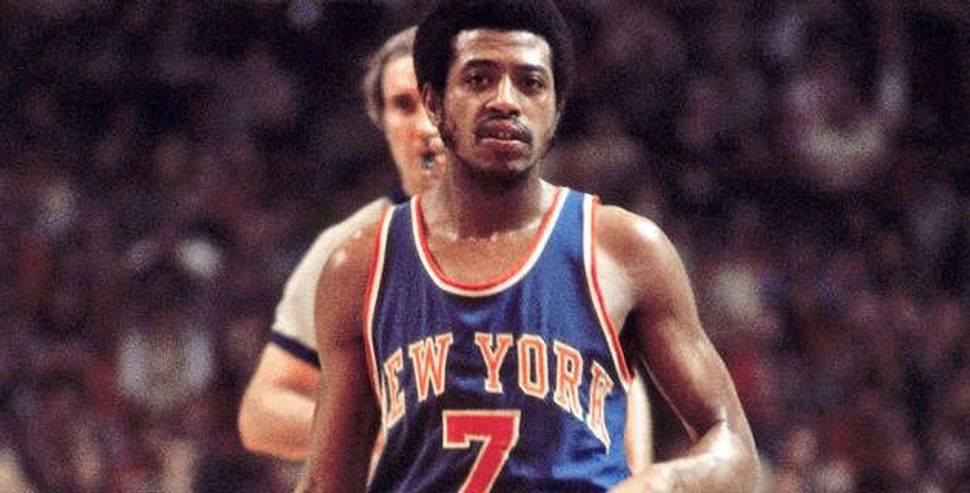 Friend Lost: Dean ?The Dream? Meminger was a longtime participant at Camp Seneca Lake, a Jewish hoops camp in the Poconos. (JTA) — Dean Meminger sat in owner Irv Bader’s office at Camp Seneca Lake and talked of his girlfriend, her battle with lupus and their plans to marry.

Meminger, known as “The Dream” as a star guard at Marquette University and a key reserve for the New York Knicks’ 1973 championship team, had just finished a four-day stint late last month at a basketball camp at the Pocono Mountains’ Jewish facility. He had taught the players with enthusiasm and his demeanor bespoke an apparent contentment with life.

Before Meminger boarded a bus back to New York, the friends, who had known each other for decades, hugged and pledged to meet soon in the city.

The next day Meminger, 65, was gone, found dead in a hotel room in Manhattan’s Harlem neighborhood.

For Bader, the phone call informing him of Meminger’s death was “like hitting me in the head.” He had employed Meminger for many summers at Seneca Lake.

Shortly after the call, Bader wondered to another longtime employee, Gus Kennedy, whether his cash payment had prompted a splurge that indirectly led to the ex-ballplayer’s demise, since Meminger reportedly had battled drugs for many years. (The cause of death has not been released.)

Bader had paid Meminger $1,200 in cash — $300 for each of the four days of running clinics and refereeing games — and added $200 because he said the ex-Knick “always needed help” financially.

With the Knicks, Meminger had played for Hall of Fame coach Red Holzman and with a cast of future Hall of Famers — Walt Frazier, Willis Reed, Earl “The Pearl” Monroe, Dave DeBusschere, Bill Bradley and Jerry Lucas.

After his six-year NBA playing career with the Knicks and Atlanta Hawks, Meminger worked in basketball off and on, running clinics and teaching kids at camps like Bader’s. He also had three coaching stints spread over more than two decades, until 2003. Since then, several friends said they didn’t know how Meminger earned a living or whether he could make ends meet.

They said Meminger kept quiet about his life; several weren’t even sure where he lived. The friends were circumspect about his drug addiction, with Bader saying he saw no signs of the problem but that Meminger would’ve been fired if he had.

Meminger had been hospitalized following a 2009 fire that started in his room in the Bronx. Crack pipes were found in the room, but they did not cause the fire, according to newspaper reports.

After the fire, “I was hard on him,” Meminger’s former Knicks teammate and longtime friend Mel Davis told JTA last week. “I told him, ‘Dean, God gave you another chance.’ ” In their semiweekly conversations in recent years, “I always motivated him to take care of himself,” Davis said.

Davis and other friends preferred remembering Meminger for his personability and court acumen. They said “The Dream” displayed a high basketball IQ and an ability to teach his young charges, notably defensive skills — the aspect of the game in which he shone in the pros.

“It was very educational for me to work alongside him,” said Barry Neuberger, Columbia University’s associate athletic director, who worked with Meminger at the camp’s basketball sessions and also hugged him goodbye before Meminger boarded the bus for Manhattan.

Meminger, Bader said, “couldn’t jump, didn’t have a jump shot, but he had a great first step and was great with kids.”

Bader, 74, has long brought past and present NBA players to his camp, including Nate Archibald, a Hall of Famer, this summer.

Basketball was in Bader’s blood going back to his days as a shooting guard at the Brooklyn Talmudical Academy — before breaking his mother’s heart by transferring to Erasmus Hall High, a public school, because it would improve his game. He placated her by attending Yeshiva University, graduating in 1960 as its all-time leading scorer with 1,374 points (he now ranks sixth), before embarking on a career in education that largely embraced sports.

For 26 years, Bader instructed teachers at Brooklyn College on working with mentally disabled children. He also coached basketball at Jewish schools in New York, including the Yeshiva High School of Queens, where a writer knew him in the late 1970s.

In those days, Bader sported a sloping mustache and rode a motorcycle to work (doubtlessly to the consternation of his daughter and son, who then attended Yeshiva High). He spoke with a comically thick Brooklyn accent and hung the appellation “Maurice” on center Larry Feinberg. (“You just look like a Maurice,” Bader told him.)

Bader, now the athletic director at Touro College, was all business when it came to basketball.

“He really pushed my buttons,” Danny Stern, a former Yeshiva High player, said last week. “I’d want to go out [on the court] and kill for the ball, do whatever it took to win.”

The veneer hid a warm heart. Bader arranged summer jobs for campers whose families could not afford the cost or waived the fees altogether. And along with the well-heeled NBA players he brought in for one-day clinics, Bader provided seasonal employment to down-on-their-luck guys like Meminger.

“It just shows the real character of somebody … who looks out for people who aren’t on the fast track anymore,” said Elliot Auerbacher, a Manhattan real estate financier who spearheaded a 2012 dinner honoring Bader.

As a kohen (member of the Jewish priestly group), Bader could not attend Meminger’s funeral on Aug. 30. Among those who did attend was Leo Klein, who had provided legal assistance to Meminger and knew him well.

Klein had played for the Manhattan Talmudical Academy when Bader was coaching Yeshiva High. His son now attends Seneca Lake. As a camp administrator and educator, Klein said, Bader engenders “the right combination of fear and respect.”

He was among those who eulogized Meminger, who is survived by two children, two grandchildren and his father. Among the mourners at the Harlem church were ex-teammates Bradley and Monroe, Meminger’s closest friend on the Knicks — Meminger memorably replaced Monroe in a deciding playoff game against the Boston Celtics in 1973 and shut down guard Jo Jo White — as well as film director Spike Lee, a huge Knicks fan.

Klein described his remarks as a “vort,” the Yiddish word for a short talk on Torah, asking the audience to consider a twin who is born. The child momentarily left behind in the womb misses the born one, unaware that he or she reached a better place filled with sunshine and other worldly wonders.

“I submitted to the people,” Klein said, “that Dean Meminger is in a better place.”