Poland’s Jewish Revival Marred by Anti-Semitism of All Stripes 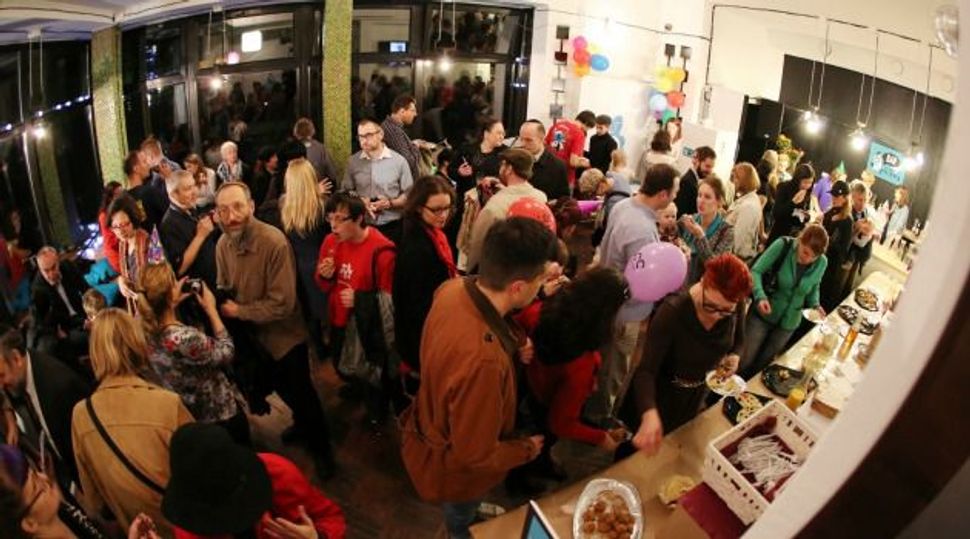 Best of Times? Guests eat kosher snacks at the opening ceremony of a new JCC in Warsaw. The festive mood comes amid some troubling signs for Polish Jews.

Michael Schudrich, chief rabbi of Poland, was on hand to affix the mezuza at the entrance to Warsaw’s first Jewish community center at its grand unveiling, October 27. The act of opening the building and cutting the ribbon was not his, however, but given over to a young boy while Schudrich helped hold the band in place.

The paint was only just dry on the modest but modern whitewashed building, located behind one of Warsaw’s main pedestrian thoroughfares right in the center of the city. Hundreds of people from Warsaw’s growing and diverse Jewish community attended the opening night: secular and religious, families and young people, Anglo and Israeli expats, Poles rediscovering a lost heritage.

Kosher food and wine were also served — “the JCC wanted to be kosher,” Schudrich told the Forward. And in today’s Poland, amid a swelling rebirth of Jewish life, that was something Schudrich didn’t take for granted.

This past July, the Polish parliament upheld a ban on shechita, or kosher ritual slaughter, by a vote of 222–178. The defeated bill would have reversed a ruling by Poland’s high court mandating the stunning of animals before slaughter to avoid cruelty in the slaughter process. Kosher slaughter, like halal slaughter under Islamic law, requires an animal to be conscious when it is killed. The court’s November 2012 ruling overrode a 2004 exemption given to the Jewish and Muslim communities on grounds of religious freedom.

But that is not the only fly in the ointment. The JCC’s festive opening occurs against the backdrop of a stubborn persistence in Poland of latent — and sometimes not-so-latent — anti-Semitism, calling into question just how secure a Jewish revival can be.

In the past year alone, the Jewish cemeteries in Warsaw and Myślenice have been vandalized; gravestones in Blonie, Kalisz and Otmuchowie have been defiled and destroyed, and anti-Semitic graffiti has been scrawled at the monument to resistance hero Mordechai Anielewicz in the Warsaw ghetto and on the synagogues in Gdansk and Zamoc.

There are routine incidents of anti-Semitism, too, at soccer matches in Lodz and Krakow, and statements from public figures such as prominent historian Krzysztof Jasiewicz, who argued in April that the Holocaust “was only possible because the Jews themselves participated in the murder of their own people.”

The gutting, refurbishment and repurposing of the unassuming structure that will now house the JCC cost just $60,000, money raised with support from the American Jewish Joint Distribution Committee. As we stepped onto the street, where the JCC celebration had spilled out from the main hall, Schudrich stressed the importance of the new center for the “re-emergence of Jewish life in Poland” and the quest to bring Polish Jews back toward their Jewish identity and their bonds with the Jewish people.

The Jewish community in Poland, which stood at 3.3 million before the Holocaust, today numbers 25,000, according to statistics produced by the JDC — though less than a third of this number register as Jewish on Poland’s official government census. After World War II, with the advent of officially atheist Communist rule, many of those relative few who survived hid their Jewishness from others, including their own children. But since the fall of communism in the late 1980s, the growth of those who self-identify as Jewish has been remarkable. Even in Poland’s census, with its more conservative figures, the trend is clear. In 2002, some 1,100 people identified as Jewish. By the next census, in 2012, that number had increased to around 7,000.

Warsaw is home to the largest community of Jews in Poland and to the ambitious new Museum of the History of Polish Jews, which opened unofficially in April of this year.

Amid this sometimes conflicting environment of fledgling renewal and sporadic outbursts of hatred against Jews, the JCC, for many, “will be the first step into being Jewish,” Schudrich said. It is, he explained, for people who are “not actively Jewish but want to do something Jewish.” Going to the JCC will be part of a “process of discovery” for them, he said.

In terms of sustaining Jewish religious life in Poland, the shechita ban remains the primary issue. But whether the parliament’s recent vote was anti-Semitic in intent remains a subject of debate. One senior Polish Jewish activist told the Forward that, in fact, the discouraging vote on religious slaughter should be seen more as a political problem than as anything to do with anti-Semitism. He declined to be identified by name, because he remains involved in ongoing efforts to overturn the ban.

The parliamentary vote on shechita, explained this activist, was simply an opportunity for the opposition and 38 rebellious members of the ruling Civic Platform party to embarrass the government. The activist added that concern over animal rights should also be considered as a possibly sincere, non-anti-Semitic motive for some of those who voted against the measure.

The JCC will bring together under one roof activities and initiatives that were, for the most part, already taking place in Warsaw — including Jewish street festivals, artistic sukkah installations and cafe educational programs — under a program called JCC Without Walls.

“The JCC is for people looking for ways into the Jewish community but for whom religion is not the way,” said Karina Sokolowska, the JDC’s country director for Poland. “It is for those looking for the educational and cultural aspects of Jewish life and intellectual Jewish subjects.”

The JDC, among others, previously supported the construction of a much bigger $3 million JCC in Krakow, which opened in April 2008. That JCC’s director, Jonathan Ornstein, told the Forward that before the center’s opening, “nobody was talking about a Jewish future” in Krakow. But in the past few years, he said, “the rate of change is phenomenal.” Ornstein said the Krakow center was particularly popular among young people who had not known they were Jewish.

Moreover, notwithstanding the embarrassment of the shechita vote, the government of Poland has been generous in its support of the Museum of the History of Polish Jews, whose construction has been financed by the City of Warsaw and the Polish Ministry of Culture and National Heritage and private donors at a cost of more than $60 million. The state also currently covers the majority of the museum’s operating budget. The core exhibition within the museum is funded through private donations.

For Piotr Kadlik, President of the Union of Jewish Communities of Poland, this paints a picture of steady overall progress in a project of Jewish rebirth despite undoubted redoubts of hostility. The ban on shechita, the “cloud of anti-Semitic statements,” and the damage to Jewish cemeteries and buildings are “obstacles to Jewish development in Poland,” he acknowledged. The JCC, by contrast, is an example of the “positive change” that has taken place in Poland since the fall of communism, a building which “adds to the map of Jewish Warsaw.”

Poland’s Jewish Revival Marred by Anti-Semitism of All Stripes