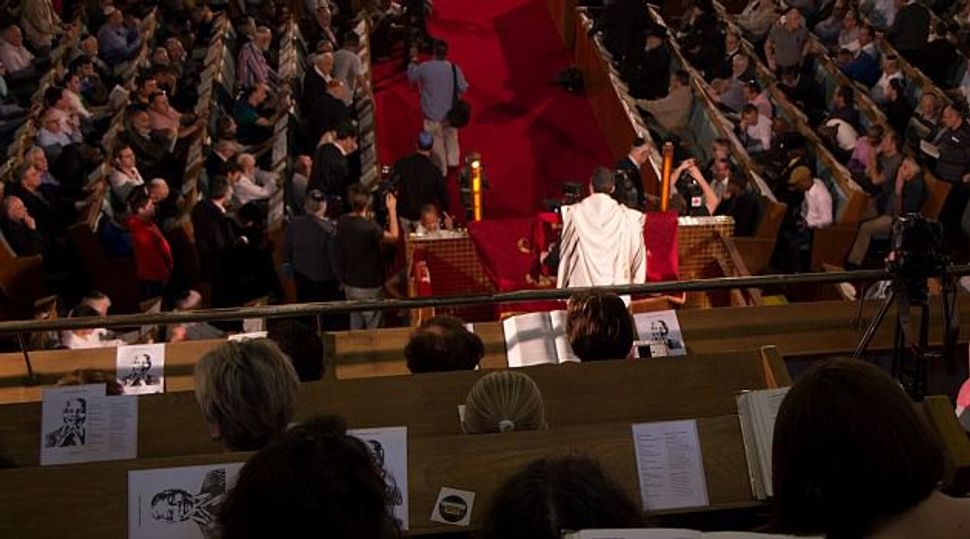 Jewish South Africa paid an emotional tribute Sunday to Nelson Mandela — a man they dubbed the rainbow nation’s Joseph for overcoming apartheid to build a future based on reconciliation.

Speaking to an overflow crowd of several thousand people in a Johannesburg suburb, Chief Rabbi Warren Goldstein recounted the Biblical story of Joseph, who overcame years of imprisonment to lead his nation.

Goldstein said the tale — which is remarkably this week’s Torah portion — mirrors the story of Mandela, who famously set aside 27 years of imprisonment on the to reach out to all South Africans.

“In Nelson Mandela, we found our own Joseph,” Goldstein said. “He was able to put aside all the bitterness from those long years of imprisonment and rebuild this country.”

He noted that most of South Africa’s 70,000 Jews immigrated from Eastern Europe in the face of pogroms and anti-Semitism, making the freedom and democracy of the new “rainbow nation” that much more precious to them.

“These are blessings that our history as Jews tells us to never take for granted,” he said.

Synagogue services were also planned in Cape Town, Durban and other main cites. The tributes came as millions of South Africans gathered in churches, mosques, shuls and temples to honor the beloved world leader.

A cantor began the service by intoning the mournful yizkor prayer for the dead at the Oxford Shul in a leafy northern suburb.

Many in the crowd stood and sang the Zulu words of Nkosi Sikelela iAfrika, the country’s national anthem.

Streaming into the event, many marveled at Mandela’s ability to overcome the bitter racial divide that left many Jews uncertain about their longterm future in the country.

“We are so profoundly grateful for what he did for us,” said Arlene Ketz.

“Every South African feels the privilege of having him as our leader,” added her husband, Monty Ketz.

Many said they were proud of the special role Jews played in the struggle against apartheid.

“The Jews have a sense of justice and fairness,” said Howard Radford, 53, an anesthesiologist. “Many stood up for what was right during the struggle.”

Jason Katz said he had already visited Mandela’s house in nearby Houghton to pay his own personal tribute to the iconic freedom leader — and marveled at the polyglot crowd paying respects.

“He’s doing in death what he did in life, bringing together the nation,” said Katz, 51.

His 12-year-old son Gabriel said he had learned a potent lesson from Mandela, who served as the country’s president after sweeping to victory in the 1994 democratic elections that ended apartheid.

“The power to forgive,” the boy said.

Goldstein ticked off a list of Jewish South Africans who played prominent roles in the freedom struggle, including Bram Fischer, a lawyer who defended Mandela during his infamous treason trial and Joe Slovo, the famed leader of the African National Congress and South African Communist Party.

The soft-spoken leader, wearing a black yarmulke, warned the crowd that Mandela’s mission would not be completed until South Africa achieves more economic and social equality.

“How loyal are we to his beliefs, the beliefs that guided his struggle?” Mbeki asked the packed crowd.

The Israeli ambassador to South Africa, Arthur Lenk, paid tribute to Mandela and read a message of condolence from Israeli President Shimon Peres.

He pointedly admitted that Israel and South Africa have had a rocky diplomatic relationship at times, but said the Jewish State has nothing but respect for the Mandela’s commitment to democracy and reconciliation.

Lenk said the lesson of Mandela for the Middle East is that enemies must set aside hatreds and make difficult compromises for peace.

“We are still looking for our own internal Mandela,” the ambassador said. “The message of South Africa is that even the most seemingly intractable differences can be overcome.”

Businessman Alan Mendelsohn said he was “very, very moved” by the event, which he said would cement the historic bond between South African Jews and leaders of the freedom struggle.

Echoing Goldstein, Mendelsohn called the story of Joseph a potent lesson for the people of South Africa — and said it could not be a mistake that Mandela’s death occurred during the Torah portion that recounts the ancient leaders heroic journey. “Nothing is coincidence,” he said.

Although the crowd was overwhelmingly Jewish, a few black South Africans were sprinkled amid the sea of kippahs in the lower level and women filling the balcony.

Thapelo Lilokoe said he started the day in church but decided to attend the synagogue service as the ultimate tribute to Mandela’s message of unity across lines of race and faith.

Wearing a yarmulke and setting foot in a shul for the first time, Lilokoe said he left with a much stronger appreciation for Judaism and its history.

“I found it so deep and filled with tradition,” he said. “It was a profound way to honor Madiba.”

Ada LeBoff said she was amazed at the turnout at the shul, which she said was bigger than the Jewish high holidays of Rosh Hashanah and Yom Kippur combined.

“I just think he was a wonderful person,” she said. “He cared about all of us.”