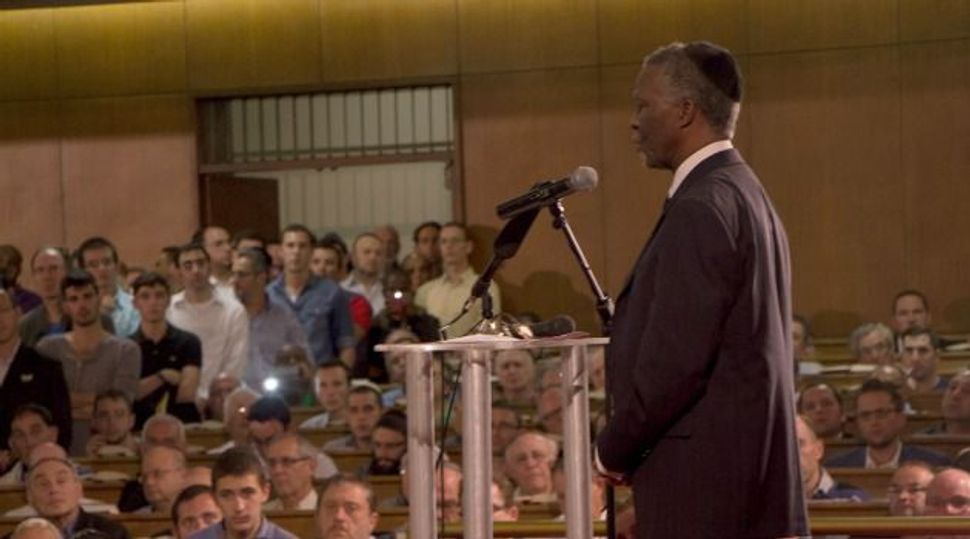 Controversy: Ex-President Thabo Mbeki addresses South African Jews about the legacy of Nelson Mandela. Some Jews and others are angry that Benjamin Netanyahu chose to snub the memorial for the freedom icon. Image by miora rajaonary

Amid public anger over Netanyahu’s bizarre claim that it would cost too much to attend, Jews slammed the move and expressed hope it would not diminish the outpouring of emotion from Jews over the death of the freedom icon.

“It’s an absolute disgrace,” said Zev Krengel, president of the South African Board of Jewish Deputies. ” This is the No. 1 Jewish citizen in the world and he cannot find a way to attend an event of this nature? It’s an absolute low point.”

Krengel said he was even more angered by the reason that Netanyahu gave for not attending.

“It will absolutely play into anti-Semitic stereotypes about Jews as stingy people,” he said. “It’s very wrong.”

“It’s absolutely not right and I hope someone apologizes for it,” said Sidney Katz, 60, of Johannesburg. “One thing about Madiba is that he united all people, Jewish and non-Jewish, black and white.”

“Jewish South Africans feel as strongly about Mandela as any other South Africans, perhaps more so,” he added. “It’s embarrassing to us.”

Marion Soffer , who splits her time between homes in South Africa an d Beit Shemesh in Israel, said she hoped the issue was some kind of misunderstanding.

“Israel is 100% mourning for Mandela – I saw people crying in the street,” said Soffer, who flew to South Africa from Israel over the weekend. “No leader should seek to diminish the respect we all feel for him.”

She noted that President Shimon Peres had hoped to attend the memorial but was unable to do so because of illness.

Sitting with her daughter and two grandchildren in an airport coffee shop, she emphasized the strong bond that Jews worldwide feel for Mandela and his message of unity.

“He stood for democracy and reconciliation – those are our values too, “ she said. “Everywhere you go, you will find Jews joining the outpouring that is happening.”

An Israeli security expert who works for the government of the African nation of Equatorial Guinea shook his head in disgust when asked about Netanyahu’s decision not to attend.

South African Jews proudly pointed out that Chief Rabbi Warren Goldstein was the very first speaker at the rain-soaked memorial at Johannesburg FNB Stadium on Tuesday.

Leading off a parade of spiritual leaders, Goldstein embraced Mandela’s legacy and reiterated his analogy between Mandela and the Biblical King Joseph.

Like Joseph, Madiba emerged from decades of brutal imprisonment to lead a great nation without bitterness, Goldstein said before reciting a prayer in Hebrew.

“We love Mandela because he ended the scourge of apartheid and built a great new nation for all of us,” Goldstein, draped in a Jewish prayer shawl, told the crowd of nearly 100,000 people. “May his memory be a blessing.”

Scores of heads of states attended the event, including Palestinian President Mahmoud Abbas. President Obama spoke movingly about how Mandela inspired him to become politically active as a young man.

That made Netanyahu’s decision to shun the gathering all the more incomprehensible to mourners.

“He should be ashamed of himself and he has disgraced his country,” said Richard Dlamini, 35, a laborer from Soweto. “Look at all the leaders who are here. And one cannot come? Please.”

John Tshola, 43, said Netanyahu’s explanation that he did not want to to spend $2 million to attend the sprawling send-off would only fuel old stereotypes about the Jewish people.

“We know they have the money to do what they want to do,” he said. “So it tells you that they have no respect for Madiba or for us as Africans.”

Richard Murigi, 24, of Kenya said he believed the real reason Netanyahu did not come was that he did not want to come face to face with Abbas.

“Of course it had nothing to do with money,” Murigi said. “This is a man who travels to the United Nations and anywhere in the world. He chose not to come.”

Hirschson responded: “[Netanyahu] would probably have loved to have bumped in to Mahmoud Abbas.”

A sprinkling of white South Africans and foreigners attended the sprawling memorial service, which was held in chilly conditions under a soaking rainstorm.

Despite the harsh conditions, many South Africans pointed out that rain is considered a traditional blessing during momentous events such as funerals for leaders.

“It softens the earth before you are returned to where you came from,” said one elderly woman, peering out from an umbrella emblazoned with the South African flag.

Samson Dhivula, 45, is a member of the Lemba tribe, which claims Jewish heritage and is scattered across northern South Africa and southern Zimbabwe.

He carried a gourd with him to the memorial as a tribute to Mandela. The makeshift calabash is used in the tribe’s traditional ceremonies to hold valuable seeds or herbs.

In Mandela’s case, Dhivula said he carried important values within his soul.

“He believed in foregiveness and reconciliation,” said Divhula, standing next to a South African Indian vendor selling $2.75 roti wraps filled with curry. “These are values we as black Jews believe in.”

The nationwide outpouring of emotion for Mandela continued as the country braces itself for the burial in his home village of Qunu in the rural Eastern Cape.

Mark Millner, a lawyer, wore a kippah as he paid his respects at Nelson Mandela Square in the upscale Johannesburg suburb of Sandton. Flowers stretched across a plaza in the square as scores waited on line to take photos in front of a towering bronze statue of the freedom icon.

He lauded Goldstein’s outspoken role in the mourning process, and said it was remarkable that this week’s Torah portion relates to the story of Joseph.

“Mandela had a particularly close relationship with the Jews,” said Millner, who lives in the predominantly Jewish suburb of Glen Hazel. “And look, all of us South Africans must be grateful for what he did for this country.”