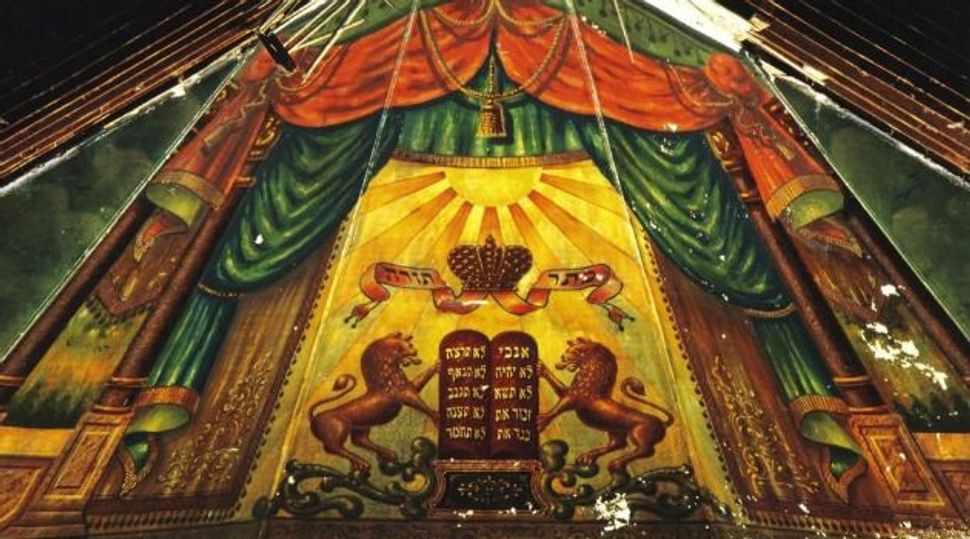 An old apartment building in Burlington, Vt. seems like an odd place to find a rare survivor of Lithuanian synagogue art and a relic of American immigrant Yiddishkeit. But the nature of treasures is that they turn up in unexpected places, and Burlington is home to a century-old synagogue mural that is an extraordinary artistic and cultural survivor linking pre-Holocaust Lithuanian synagogue art to the religious beliefs and aspirations of first generation Jewish immigrants to America.

Beginning in the 1880s, Burlington hosted a tight-knit and vibrant community of Lithuanian-born Jews who maintained ties with the Old Country, but also happily adapted to their new environment. Today, many of their descendants still live in Burlington, and the original Ohavi Zedek Congregation, founded in 1885, continues as a strong and creative Conservative synagogue.

Aaron Goldberg, a sixth-generation Burlington Jew and one of two volunteer archivists at Ohavi Zedek is leading a project to move and preserve the mural. When I first heard about the mural last summer, he told me, “The mural is a survivor that happens to be in our backyard. It deserves to be shown and preserved, it deserves to be saved to honor millions and millions of people, Jews and non-Jews, who did not survive the Holocaust.” The Center for Holocaust Studies at the University of Vermont is actively supporting the project. 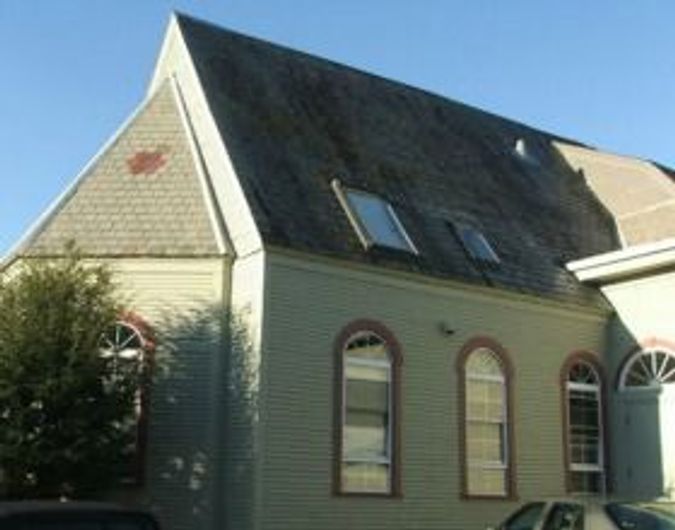 The Lost Shul Mural, as it has come to be called, was revealed beneath the walls of an apartment building that once housed the Orthodox Chai Adam Synagogue, founded in 1889, after splintering off from Ohavi Zedek. It was probably decorated in 1910 when the congregation engaged a young Lithuanian Jewish artist, Ben Zion Black, to paint the synagogue — a six-month-long project for which he was paid $200. Some stories say the artist came because he was following a girlfriend, Rachel Saiger, whom he married in 1912.

Black was born in Kovno, Lithuania. Once in America, he was active as an artist, actor, Yiddish writer and avid mandolin player. He never joined a synagogue himself; his religion was secular Yiddish culture. After limited success as an artist, he supported himself and his family as a successful commercial sign maker. (The exact history is still uncertain, and an alternative story holds that Black arrived in 1910 but dates the mural to 1918.)

Before settling permanently in Burlington, Black also spent time in Boston, where he apparently painted some backdrops for theatrical productions — though these have been lost. He never again painted a synagogue.

Black was trained in Lithuania, where his father was an artist who made illustrated books. The Lost Shul Mural is a rare survivor of the rich Jewish artistic tradition in Eastern Europe that in the 20th century combined traditional folk design and manufacture with the techniques of more modern training. This world of Jewish art was destroyed in the Holocaust and remains poorly understood.

The mural is a rare and striking painting, one of only a small number of extant synagogue murals in North America painted by immigrant Jewish artists for congregations that were still tied to their distant homelands, the Yiddish language and traditional Jewish religious practice. Nothing quite like this survives in Europe, and no mural in the United States, and only one in Canada (recently restored), equals the Lost Shul Mural in size, scope, completeness and Jewish meaning. Only a few highly damaged painted fragments survive from all the synagogues of Lithuania, most notably from Čekiškė, the town of origin for many of Burlington’s Jews. 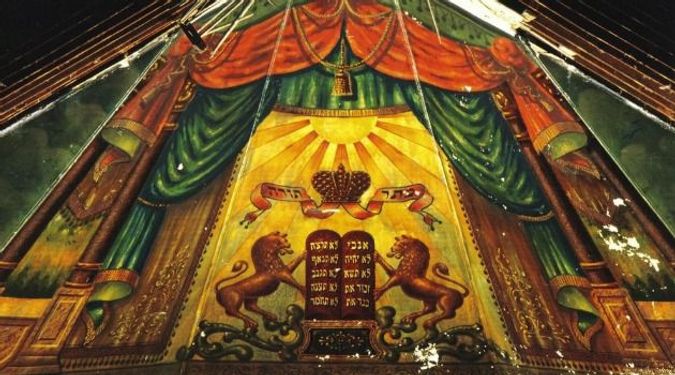 Today, in all of Eastern Europe, only a handful of surviving painted synagogue decorations can compare with the Lost Mural’s preservation of the completeness of its design, though more fragments continue to be discovered. The recently conserved paintings of Pińczów, Poland and Boskovice, Czech Republic are mostly decorative wall paintings, not ark wall decorations rich with the Jewish symbolism that carried deep meaning for their communities. Remains of paintings from smaller urban prayer houses painted in the early 20th century such as those in Będzin and Kraków, Poland, are closer in spirit to the Burlington mural, though quite different in content.

Chai Adam Synagogue closed in 1939 when it merged with Ohavi Zedek Synagogue, and then served a variety of functions before its final transformation, which obscured all remaining traces of religious identity. When the wood frame building was turned into an apartment building in 1986, Goldberg and others persuaded the new owner not to destroy the mural and to cover it over instead. This year, when ownership again changed hands, Goldberg and his colleague Jeffrey Potash devised a plan to reveal and reclaim it.

Now, Ohavi Zedek Synagogue is renting the apartment behind which the mural was hidden, and has cut away the covering wall to reveal the still intact and stunning painting. When I visited in November, and came up close to the mural to check its condition, I was amazed at its power — even in its present damaged condition. Painting conservator Constance Silver has been engaged to save the painting in situ. She explained that the situation is dire, but reversible. She is confident the work can be saved and will appear much as it did in its original state. When funds are raised, the mural will be cut away and the section of wall will be moved and installed in the vestibule of Ohavi Zedek Synagogue along with educational displays and the synagogue archives.

The new synagogue is a modern building erected in the early 1950s, located only a short walk from former the Chai Adam building and the entire old Jewish neighborhood.

The mural combines many primary symbols of Judaism. Black uses bold theatrical colors and lines to emphasize particular themes in different sections of the mural, much the way that a rabbi highlights different aspects of a Torah portion each year. Inscriptions, known today from a surviving photo and a few fragments, gave worshippers clues to some mural meanings and perhaps provided the occasional sermon prompt.

The mural’s central image is that of a large Decalogue set upon a throne-like stand and flanked by lions similar to those found on heraldic devises and long familiar in Jewish tradition. Above it floats a crown, and the Hebrew words keter Torah, or “the crown of the Torah,” on a painted ribbon, as if there was any doubt. Appropriately, the Torah and the commandments are given a royal treatment. Where in a church apse one might find an enthroned Jesus or Mary, here only the word of God is exalted.

The arrangement suggests the throne of Solomon described in the Book of Kings, which was supported by carved lions (and so much more), but the Burlington lions should likely be seen in their more common guise as surrogates for Jews — supporters and defenders of Torah. All this is set in a dimension between the mundane (Burlington) and the celestial.

Supporting and studying Torah is the path between these realms. The apse-like area is framed and richly layered with painted curtains supported on four strong columns. In this painted architecture we see a timeless biblical architectural history where the tents of Jacob, the Tabernacle and Jerusalem Temple are conflated and linked to the contemporary synagogue.

Black was an avid advocate of Yiddish, and more at home in the theater than the shul, so there may also be included just a touch of Yiddish theater.

The commandments are bathed in brightly painted rays of light, which seem to emanate from within and beyond the curtained enclosure. In case we are unsure of how to locate ourselves, the Ma Tovu prayer (“How goodly are thy tents O Jacob”) and the opening of Psalm 82, read every Tuesday after the morning services (“God standeth in the congregation of God,” sometimes translated as “God stands in the Divine Assembly”), are inscribed above and beside the ark.

Front and center, immediately over the ark and under the painted Decalogue, Black included the text of the Ki Mi Zion Tetze Torah prayer: “For out of Zion shall go forth the Torah, and the word of the lord from Jerusalem.” This is an appropriate affirmation for a Diaspora community, and serves as a recognition of the centrality of Jerusalem and Zion to the Jewish people. It is perhaps also a nod to the painter Ben Zion (literally son of Zion) Black. The inscriptions were painted in large art nouveau-styled letters, linking Black to the international movement heavily influenced by Jews (and adopted by leading Zionist artists). Black’s flair for sign painting is already evident.

According to Myron Samuelson, author of the 1976 study “The Story of the Jewish Community of Burlington,” the synagogue ceiling was painted with an open-sky effect with a multitude of birds, “an illusion many congregants later recalled left them with the lifelong impression of the sanctuary being open to the outdoors.” Similar versions of this type of ceiling can still be seen in the Walnut Street Shul in Chelsea, Mass., and also in the Tsori Gilod Synagogue, in Lvov, Ukraine, which was painted in the 1930s. Other accounts relate that the sky also held angels playing Black’s favored mandolin (he once organized a 30-piece mandolin orchestra) — unpopular imagery for the traditional congregation.

Without doubt, the Burlington mural has its own artistic merit. Its greatest value, however, is as a surrogate for all the other works destroyed by oppression in Europe and lost to “progress” in America. Ohavi Zedek Synagogue makes a case for the communal importance of the preservation and presentation of this mural. Its conservation serves to protect an accidental survivor of an otherwise vanished past, as well as to provide a forward looking affirmation of Jewish history and traditions.

Samuel D. Gruber teaches and writes about Jewish art and architecture. He was recently scholar-in-residence at Ohavi Zedek Synagogue in Burlington, Vt.

More information about this project is available at www.lostshulmural.org.