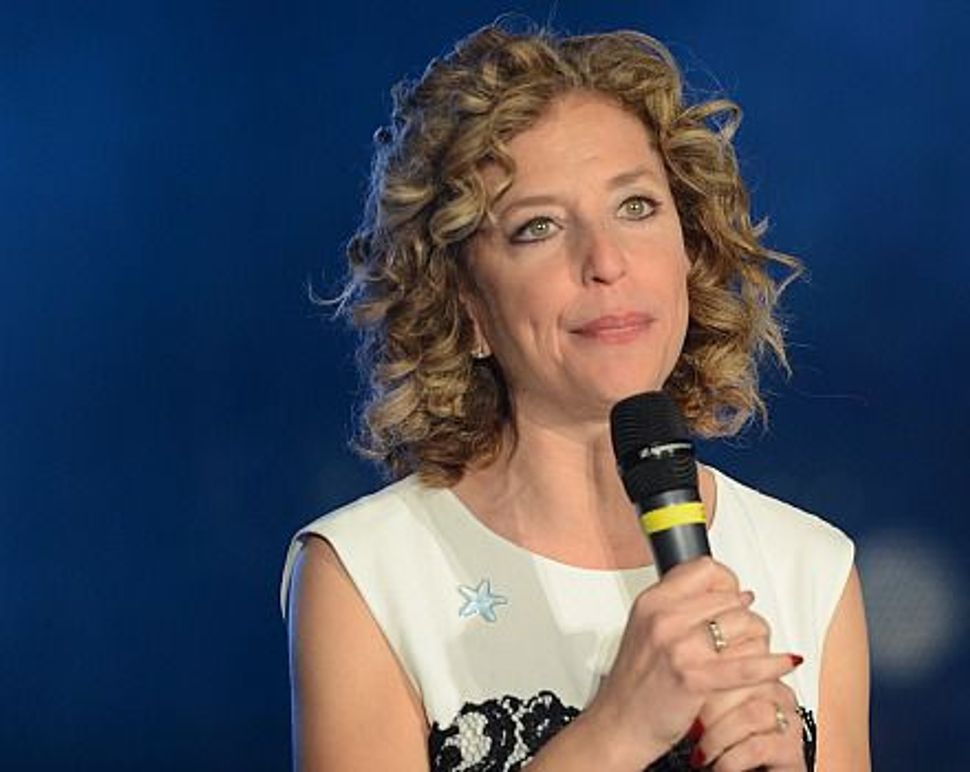 As Jewish groups push Congress to increase sanctions on Iran — and President Obama pushes back hard in the opposite direction — one lawmaker standing at the crossroads of this clash exemplifies the challenge the Jewish groups face.

Debbie Wasserman Schultz of Florida is a member of the House of Representatives; not the Senate, where most of the lobbying action is now taking place. But Wasserman Schultz, who has refused to take a public stand on increased sanctions now against Iran, is attracting more pressure from Jewish activists than many Jewish senators who are in outright public opposition to a bill that would do so.

There’s a reason for this: Wasserman Schultz, whose South Florida congressional district is heavily Jewish, has long been an unwavering supporter of the pro-Israel agenda defined by the American Israel Public Affairs Committee, the large, mainstream pro-Israel lobby. But Wasserman Schultz also heads the Democratic National Committee and was put there by President Obama, one of her crucial patrons.

Right now, she is reportedly engaged in an intense but low-profile push against the Iran sanctions measure. And the combination of her DNC position and her undisputed record in support of Israel is seen as having an impact on wavering Democrats in both houses.

“It’s never comfortable to have differences with good friends,” said former Florida Congressman Robert Wexler of Wasserman Schultz’s dispute with AIPAC. “But just as Debbie respects AIPAC’s point of view, AIPAC should respect her point of view, because both of them are equally pro-Israel.”

Spokespersons for AIPAC and for Wasserman Schultz declined to comment on the current relations between the lobby and the congresswoman. But Michael Adler, who is both a major Democratic Party donor close to Schultz and an AIPAC activist, warned that the pressure on her reflected a desire to make the Iran sanctions bill a “litmus test on if you are pro-Israel” — a move he warned against.

“She is concerned about the criticism because she is a supporter of sanctions,” said Adler, whose own stand may reflect divisions on AIPAC’s approach even within the lobby. He described those in the pro-Israel community who criticized the congresswoman as being “so wrapped up in their own belief that they can’t recognize there are good pro-Israel people on both sides of this discussion.”

But it is that ability to be counted as “pro-Israel” on either side of this issue that is vexing activists who want to force congressional lawmakers to choose.

Right now, the Senate’s Nuclear Weapons Free Iran Act has 59 co-sponsors in the Senate, one vote shy of the number needed to force a vote, and far from the 67 senators required to override a presidential veto — a veto Obama has promised if the measure passes both houses. The bill calls for imposing new, automatic sanctions on Iran if it does not live up to a recently signed interim agreement that imposes new limits on the country’s nuclear program, which many other countries fear has as its goal the development of nuclear weapons. (Iran says its program is only for non-military purposes.)

Iran, which is currently negotiating with several countries, including the United States, to reach a stronger, permanent nuclear accord, would also suffer new sanctions under the bill if it did not cease all enrichment of uranium for this program after the interim agreement’s six-month term expires — even if the final agreement allowed it to enrich uranium to a low level, as many expect.

Another provision promises U.S. support for Israel if Israel, which views a nuclear Iran as an existential threat, decides to attack Iran to block its nuclear advancement.

Iran has threatened to walk out of the current talks if the Senate bill passes. And the administration, which sees the bill’s language as contrary to its own negotiating goals, has used the harshest of terms to describe the damage the bill could cause. Its passage, said White House Jay Carney could lead to “a march to war” as the only alternative to collapsed talks.

But proponents of more economic sanctions say it is only the pressure from earlier sanctions that has brought Iran to the negotiating table, and the threat of further sanction that will ensure the negotiations’ success. AIPAC has made passage of the new sanctions a top priority and has been lobbying in full force for its passage.

But in the Senate, even Jewish senators have fallen on both sides of this debate, with a majority unwilling to support the measure. New York’s Democratic Senator Chuck Schumer has been leading the pack in support of the new sanctions bill, which was authored by Democrat Robert Menendez of New Jersey and Republican Mark Kirk of Illinois. Maryland Democrat Ben Cardin is also a strong supporter of the bill. But Connecticut Democrat Richard Blumenthal, one of the bill’s original co-sponsors, has recently changed his mind and is now opposed to the measure.

Others who oppose the bill include Democratic Jewish senators Carl Levin of Michigan, Ron Wyden of Oregon, and Californians Dianne Feinstein and Barbara Boxer.

Feinstein came under fire from pro-Israel activists after stating in a January 15 Senate floor speech that the bill could be interpreted as allowing Israel to “determine when and where the United States goes to war.”

This poses a delicate problem for AIPAC, which has long made the bipartisan nature of its support in Congress a prime point.

Wasserman Schultz has no formal standing in the current Senate debate. But her reported activism behind the scenes in seeking to stave off support for the bill and the unique impact of her status in both houses as DNC chief has, most likely, led to the targeted pressure Jewish activists are exerting on her.

Those pressures include calls to Wasserman Schultz’s district office in Florida from AIPAC members, prompted by an AIPAC email to its Sunshine State supporters urging them to “respectfully ask” whether reports that she was working to block the Iran measure are true.

According to a source in touch with both Wasserman Schultz and AIPAC, Wasserman Schultz sought out the lobby’s leaders about this when both were together at the funeral of former prime minister Ariel Sharon early in January. The AIPAC leaders assured her there that they were not targeting her, this source said.

Meanwhile, a video ad produced by the Emergency Committee for Israel, a conservative pro-Israel organization led by Republican William Kristol, is much more aggressive. “She says she’s pro-Israel,” the ad states. “She says she’s tough on Iran, so why is she against bipartisan Iran sanctions?” asks the ad, which was aired in Wasserman Schultz’s South Florida congressional district. Inside the Beltway, Adam Kredo, a journalist with the Washington Free Beacon, a favorite news source for Washington conservatives, has kept up the drum beat from the right with stories highlighting Wasserman Schultz’s role in the congressional debate.

“Senior congressional aides…say that Wasserman Schultz’s behind-the-scenes bid to stymie the Iran resolution has become problematic for bipartisan supporters of a robust sanctions regime,” Kredo reported. “’People are talking about it,’ said one senior Capitol Hill insider familiar with the sanctions negotiations. ‘Sources in the Jewish Federation network in Florida are saying this too; she’s not been very helpful.’”

Through all of this, Wasserman Schultz, who declined to be interviewed for this story, has resolutely avoided speaking out publicly on this issue.

Her spokeswoman, Mara Sloan, said in a statement that Schultz “has been a strong supporter of sanctions against Iran and will continue to be.” Sloan listed all the Iran sanctions bills that Wasserman Schultz supported and co-sponsored in the past and said she “remains a staunch proponent of stricter sanctions against Iran as a deterrent to their nuclear weapons ambitions.”

But Sloan would not address the question of Wasserman Schultz’s position on the current sanctions legislation.

“It’s significant that such a massive onslaught seems not to be working,” said Dylan Williams director of government affairs at the dovish-leaning J Street lobby, of the push against the congresswoman.

But will Wasserman Schultz, who has always been closer to AIPAC than to J Street, pay a personal political price for working against AIPAC on this issue?

“No,” predicted Wexler, “Debbie will come out of this debate just fine.”