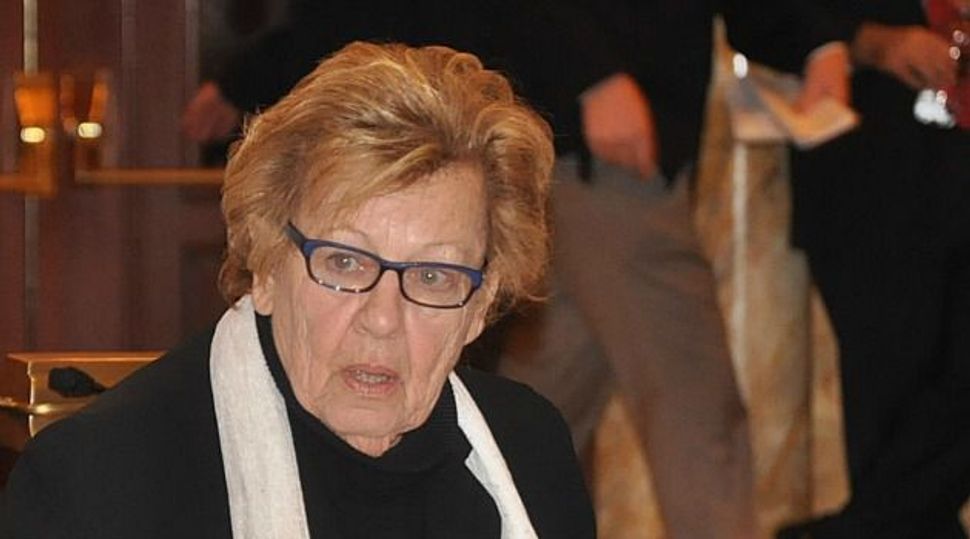 Long before she ever contemplated the prospect of investigating the governor of New Jersey for corruption, Loretta Weinberg had to face down corruption accusations made against her.

The boodle in question was 8 tons of tuna.

It was during the mid-1980s, years prior to her running for office, that the tuna disappeared, under fishy circumstances, from the Bergen Pines County Hospital, in Paramus, N. J., where Weinberg served as assistant executive director. But in Weinberg’s case, when the county leadership fired her because of the security breach at the public hospital, she sued and won a $70,000 settlement.

The tuna caper marked the last time allegations of serious misconduct were ever leveled against Weinberg, who has cultivated a reputation for being tough on corruption in the often scandal-rocked world of New Jersey politics. And now, from her post as the majority leader in New Jersey’s State Senate, the self-described “feisty Jewish grandmother” from Teaneck is leading the senate’s high-profile investigation of the bridge scandal swirling around the administration of her longtime political nemesis, New Jersey Governor Chris Christie.

Weinberg’s star turn in the political klieg lights is a late-life development in a late-life political career. The 78-year-old didn’t run for office until she was in her 50s. But once she set on that path, she rose determinedly through the ranks of New Jersey politics, from Teaneck’s city council to the halls of the state assembly to the state senate and her current position as majority leader. In the course of her storied life, Weinberg has encountered numerous setbacks, including a failed bid for the lieutenant governorship in 2009, and the loss of her life savings in the Bernard Madoff investment scheme.

This is not the first time Weinberg has faced off against a powerful politician. In her first two elections for the state senate, she stared down Joseph Ferriero, the powerful Democratic boss of Weinberg’s native Bergen County, who had thrown his support behind other candidates. Most observers wrote off her chances against his hand-picked candidates. But Weinberg fought back, ultimately receiving the Democratic nomination and winning the Senate seat in 2005. She then fended off a challenger backed by Ferriero in 2007.

Ferriero’s fate afterward reflected another aspect of Weinberg’s political life: She has a knack for outlasting her political rivals, and often gets the last laugh. In September 2013, Ferriero was indicted on charges that he engaged in racketeering and bribery while heading the Bergen County Democratic Party. Ken Zisa, Weinberg’s senate campaign opponent in 2005 and Ferriero’s own choice, is confined to his home pending an appeal of his conviction on charges of insurance fraud and official misconduct while serving as Hackensack’s police chief. It remains to be seen whether Christie, with whom she has also clashed in the past, emerges in better condition.

Given the mutually hostile history between Weinberg and Christie, some are wary of Weinberg’s new role as a lead investigator of the bridge scandal.

“We’ll see if, going forward, she will be able to have an unpartisan, unbiased investigation,” said Matt Rooney, editor of the conservative New Jersey blog Save Jersey. “To be honest with you, I’m not hopeful based on her past track record of hyper-partisanship.”

But Weinberg brushed aside his concerns. “We’re doing this in, I think, an appropriate way, and we will be fair and impartial. Otherwise we have no credibility,” she said.

Weinberg has a notable and enduring capacity for outrage about corruption in government and lists government transparency as one of her most important priorities. “She is hard on those who take advantage of their position to enrich themselves when it’s about public service,” Democratic Assemblyman Gordon Johnson said. “That gets her upset.”

Her own squeaky-clean record was likely one of the main reasons former governor Jon Corzine asked Weinberg to run for lieutenant governor in his 2009 bid for re-election against Christie. Two days before the announcement, 44 people were arrested as part of the “bid-rigging” scandal, a massive New Jersey corruption scheme involving money laundering and organ trafficking. Though she and Corzine ultimately lost, Weinberg became the first Jewish woman to run for statewide office in New Jersey.

Weinberg is as unabashed about her liberalism as she is about her passion against corruption. During her career as a state legislator, her issue priorities have included health care, gun control, gay and lesbian rights, and education. Women’s health is at the top of her list, and she has slammed Christie for trying to remove public funding of Planned Parenthood. Weinberg said she is “proudest” of a 1995 law she helped pass that allows women to remain in the hospital for two days after giving birth.

Weinberg describes her political values as a product of her past. Born in 1935 in the Bronx, she grew up in Southern California and graduated from the University of California, Berkeley in 1956. In 1964 she moved to Teaneck with her husband, Irwin Weinberg, and her two young children during a time of political upheaval in the northern New Jersey municipality. At the time, Teaneck residents were debating whether to desegregate their school system; in 1965, Teaneck became the first majority-white community in the nation to voluntarily desegregate, a decision Weinberg strongly supported.

Weinberg’s roots also run deep in the Jewish community of northern New Jersey. She is a longtime active member of the Bergen County section of the National Council of Jewish Women and has attended Temple Emeth, a Reform congregation in Teaneck, for more than 40 years.

“In terms of her commitment to women and families, that comes directly from her Jewish values,” said Steven Sirbu, rabbi of Temple Emeth. “By and large, our congregation takes pride in everything she accomplishes, because we understand that she is both a state senator and a very proud Jew.”

Weinberg agreed that Jewish values inform her political outlook, citing the “values that we learn in the Jewish religion — that we repeat in our prayer service — about helping those who don’t always have the voices to be able to take care of themselves.”

In her family life, Weinberg was also the one who went off to work each morning, while her husband, who worked at home as a retail store designer, played the role of primary caretaker of their children. Weinberg volunteered for countless Democratic political campaigns and became politically active as a young mother long before she ran for office. She was also, her daughter recalled in an interview, quite beautiful.

“She was like a young Grace Kelly, only Jewish, from the Bronx and living in New Jersey,” said Francine Weinberg Graff.

Like many prominent members of the New York area’s Jewish community, Weinberg was hit hard by the Madoff affair, which wiped out her life savings of $1.3 million in late 2008. “I’d never heard of Bernard Madoff until all this happened,” Weinberg said. She had invested her money with financial manager Stanley Chais who, it turned out, ran one of Madoff’s feeder funds. “It was the one time in my life since my husband died when I was glad he wasn’t here to see something,” she said.

Afterward, Weinberg abandoned plans for vacations with her grandchildren. Her daughter, who had also invested her money in the feeder fund, had to go back to work after her savings, too, had evaporated. “We’ve had some rough years financially,” Weinberg said. “I’m not completely out of the woods.”

But Weinberg has moved on, determined that “my life and my children’s lives are not going to be defined by Bernard Madoff….I don’t spend a lot of time thinking about it.” she said.

After losing her savings in the Madoff affair, Weinberg began collecting a state pension. Yet in 2011 she criticized Christie for allowing political allies to draw pensions while still serving in government, an accusation that Christie called hypocritical. Christie condemned Weinberg for “hiding behind Madoff” in order to draw her own pension, and urged reporters to “take the bat out on her for once.”

That comment drew condemnation from Weinberg, Democratic lawmakers and Weinberg’s 7-year-old granddaughter, who wrote to the governor, asking him to “stop bulieg eevribati!” (“stop bullying everybody”). Christie said his “bat” remark was taken completely out of context.

Weinberg was devastated by the comment. “That was the only time I ever really saw her get upset about any of it,” her daughter said. “She cried. She got very mad, because she’s never hidden behind what happened with Bernie Madoff, and she never will.”