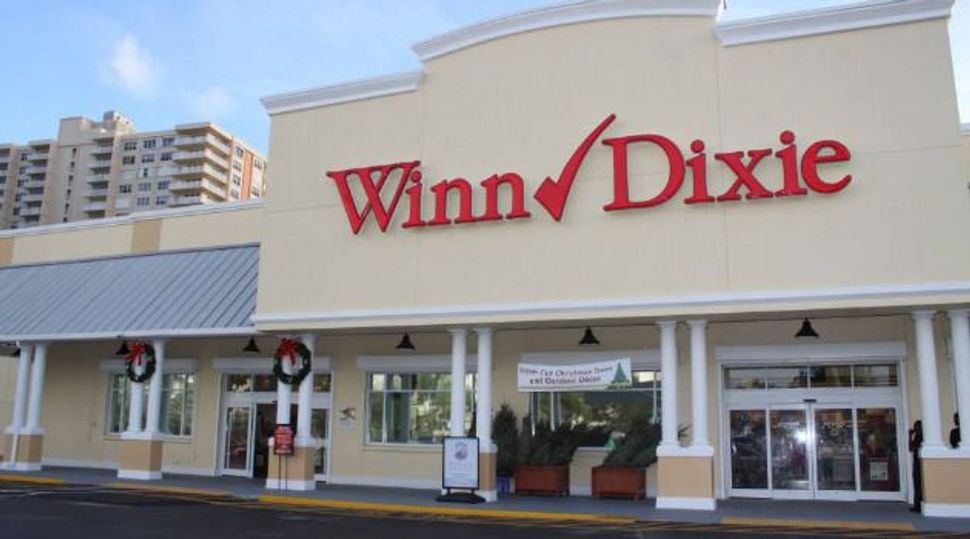 (JTA) — Stroll past the kosher section of most large supermarkets in America and you could be forgiven for thinking that Jewish diets consist mainly of jarred gefilte fish, unsalted matzahs and Tam-Tam crackers.

Not so at the Winn-Dixie supermarket in this affluent South Florida suburb.

There’s a kosher bakery with fresh pizza and dairy and pareve desserts; a meat and deli counter with hot foods like chicken wings, potato kugel and meatballs; a refrigerated case with cold salads; pre-packaged Winn-Dixie-branded matzah balls, chicken soup and carrot “tzimmise,” and even a kosher sushi chef who makes rolls to order. Just don’t ask for eel: Non-kosher sushi is not available in this store.

The whole operation is supervised by a team of kosher supervisors, or mashgiachs, who work for Winn-Dixie and are certified by the Orthodox Rabbinical Board of Broward and Palm Beach Counties, known as the ORB.

“I’ve lived in a lot of Jewish communities, especially in New Jersey, and no standard supermarket has the breadth of merchandise that Winn-Dixie has,” Chanie Kirschner, a mother of four who moved to the area a year and a half ago, told JTA. “It’s a huge convenience. At their full-service deli you can walk up to the counter and get your meat cut for you, which is something even the local kosher supermarket doesn’t have.”

The Winn-Dixie in Boca is one potent illustration of the growing U.S. market for kosher food and the lengths to which major grocery chains are going to cater to kosher consumers. It’s also a sign of the rising demand for kosher food in South Florida, where Winn-Dixie, a chain with more than 480 stores in five states in the South, now has three stores with in-store kosher operations — in Boca, Aventura and Tamarac.

The Jacksonville-based company, which is owned by BI-LO Holdings, spent nearly $3 million revamping its store at 7024 Beracasa Way in Boca Raton last year to focus on kosher (the store also carries non-kosher items). Company officials say the investment is paying off: Since the turnover was completed last fall, business in the store’s newly kosher departments has tripled.

“We knew it would be a successful store. That’s what you get when you build what the community wants,” said Deborah Shapiro, Winn-Dixie’s director of loyalty marketing and the person who spearheaded the company’s expansion in the kosher market. “We want to make ourselves a one-stop shop.”

The Winn-Dixie in Boca is hardly the only big-box supermarket in the country with in-store kosher facilities. A Kroger in Atlanta has its own kosher Chinese restaurant. There are large kosher deli counters at Jewel-Osco in the Chicago area, Ralphs in the San Diego suburb of La Jolla and Acme in central New Jersey. Stop & Shop bakeries all over the Northeast are kosher.

What makes the Boca Winn-Dixie unique is the unusual volume and variety of its offerings, including a kosher nonperishables section that’s larger than many kosher-only supermarkets. The store also has many yarmulke-clad stock boys and checkout clerks.

Supermarkets first began experimenting with in-store kosher operations two decades ago, mostly with kosher bakeries, but over the last 10 years the market has expanded dramatically, says Menachem Lubinsky, an expert on the kosher food industry and CEO of Lubicom Marketing Consulting.

“Supermarkets are recognizing that it just makes economic sense to court this particular constituency,” Lubinsky said of kosher consumers. “It’s a lead-in to keep the customer shopping the rest of the store, which sometimes is more lucrative than what they’re buying in the kosher sections.”

A lot goes into turning a supermarket kosher. First, there’s the market research, which in Boca’s case meant surveying a three-mile radius around the store to assess demand. The company collected data from Jewish federations, institutions and local synagogues; interviewed Jewish community leaders; convened focus groups of shoppers and even considered the local Muslim community, whose needs for halal meat can be satisfied by kosher.

Winn-Dixie, which went into bankruptcy for a year in the mid-2000s, already had figured out that niche markets could be a big win — not just kosher, but Hispanic and organic too.

Winn-Dixie’s first successful kosher operation was a small deli counter that opened in 2004 in a store in Aventura, near Miami. That was followed in 2007 by the opening of a kosher deli and bakery in its Tamarac store, and then an expansion in 2011 of the Aventura store that doubled the kosher deli’s size and added a meat cutting room and bakery. Business soared. Within months, Winn-Dixie was adding specialty items from Israel and New York and drawing up plans for Boca, which would be its biggest-ever kosher operation.

Meanwhile, Shapiro, an Orthodox Jew who was Winn-Dixie’s kosher category manager at the time, was leading a companywide kosher expansion, getting kosher certification for as many Winn-Dixie private-label products as qualified for it. In the last eight years, the company’s kosher brand presence has grown by 80 percent, according to Shapiro.

The company also launched a Winn-Dixie-branded kosher line of pareve (non-dairy) baked goods, including black-and-white cookies, linzer tarts, macaroons, rainbow cookies and challah. Today, customers can walk into any Winn-Dixie store in the five states the company operates — Alabama, Florida, Georgia, Louisiana and Mississippi — and buy challah or have the store order it for them.

In all, 135 Winn-Dixie stores carry some specialty kosher items, though only the three in South Florida have in-store kosher supervision.

One of the biggest hits at the flagship store in Boca has been the kosher pizza, which at $9.99 for a pie with toppings is a steal by kosher standards. Some customers take home unbaked pies; others have the store bake the pizzas for them and then eat them at the store’s small seating area.

Despite the scope of its kosher offerings, Shapiro says Winn-Dixie is not trying to drive kosher-only markets out of business. The owner of the closest local kosher grocer in Boca declined to discuss the impact of Winn-Dixie’s expansion on his business.

“We are there for the convenience of a one-stop shop, so if you decide you want to make spaghetti and meatballs for dinner, we have the basics — plus a little bit extra.”