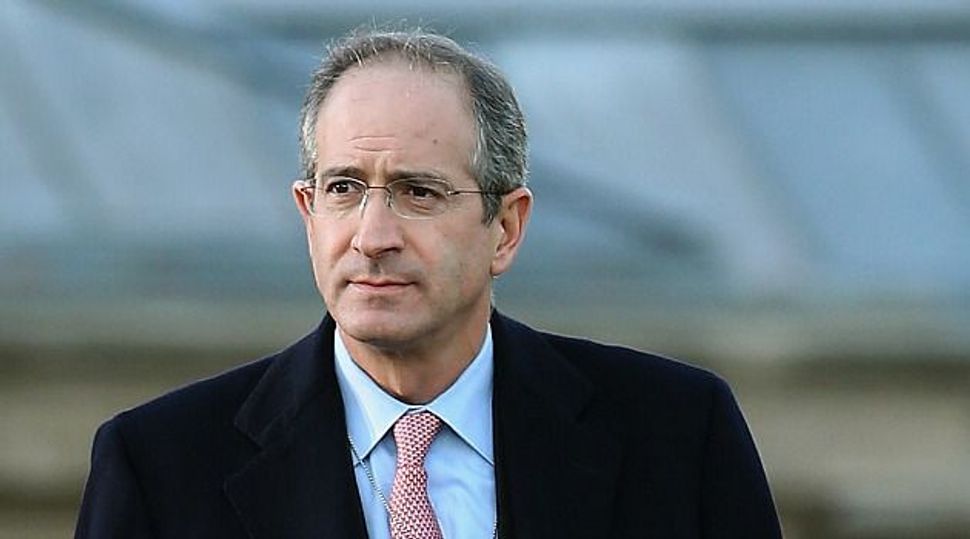 Cable Guy: Brian Roberts took over his father?s Philadelphia business and turned into a major player in the media world. Image by getty images

A huge merger may turn the son of a Philadelphia Jewish entrepreneur into one of the most powerful Americans in the media industry.

Brian Roberts, 54, chairman and CEO of Comcast, a cable and broadband provider that announced on February 13 its intention to take over Time Warner Cable in a $45 billion deal, seeks to control the cable services of more than 32 million American homes, which would make him the unchallenged leader in the field.

The merger — which still needs congressional and regulatory approval — marks the latest step in the Roberts family’s long road from a modest start by his father and two Jewish partners in Tupelo, Miss. 50 years ago, to becoming America’s largest provider of home media content.

Roberts, a Maccabiah Games squash gold medalist known for his affinity for Israel, has not made his mark on Jewish life. But his Jewish identity, friends say, should not be doubted.

“Brian’s commitment to religion and Jewish causes is like every other thing he does: It is extremely personal and low-profile,” Ed Rendell, the former Pennsylvania governor, told the Forward. Roberts, he added, “does not carry these things on his chest.”

But it is part of his company’s DNA. Comcast was established in 1969 by Roberts’s father Ralph and his two Jewish partners, Daniel Aaron and Julian Brodsky. During a poker game, Ralph Roberts had heard about a small cable company in Tupelo looking for investors and the three partners decided to step in.

Aaron’s family had escaped growing anti-Semitism in Nazi Germany and arrived in New York in 1937. Both his parents committed suicide shortly after and Aaron and his brother were placed in foster families by a Jewish relief agency. Years later, Aaron said that his life was lived in the “shadow of the Holocaust.” When Brian Roberts joined the family company, Aaron was his first boss. “He had the greatest heart and social conscience,” Roberts recalled when discussing his involvement with Steven Spielberg’s Shoah Foundation. Aaron died in 2003 from Parkinson’s disease.

Brodsky, the third founder of Comcast, stayed with the company until his retirement in 2011. He served as vice chairman and is credited with pushing Comcast into the internet business, but when it came time to pass the business on to the next generation, Ralph Roberts, who by then owned a larger share of the company, brought in his son to take over. Brodsky and his wife Lois run a $10 million family foundation that supports many communal and progressive causes, including Jewish services and organizations.

Ralph Roberts’s approach to business was shaped by the Great Depression. He grew up in an affluent Jewish family, but when fortunes turned, the family lost all, teaching young Ralph about the need for caution and saving. He purchased a belt and suspenders company, sold it when competition grew, and then moved on to cable TV, a field that was controlled at the time by small local companies. A supporter of Jewish organizations, Ralph Roberts has been honored by the Anti-Defamation League and by B’nai B’rith International. His wife, Suzanne Roberts, is an actress and television host.

Of the couple’s five children, Brian Roberts was the only one to take an interest in the family business and the relationship he developed with his father is still considered unique. Brian Roberts, who considers his father a mentor and his closest business partner, started visiting the Comcast offices at the age of 13, poring through annual reports and documents. In high school, he spent recess reading the Wall Street Journal, and after graduating from the Wharton School of the University of Pennsylvania, he asked his father if he could join the business. Ralph Roberts sent the designated heir to start from the bottom, selling cable subscriptions door to door and climbing cable poles. But by the age of 30, Brian Roberts was already CEO.

His focus has always been on business, with one clear exception: squash. Roberts’s love for the sport has also been his sole public manifestation of his Jewish identity, using a squash racquet to express his closeness to other Jews and to Israel.

Roberts made his first visit to Israel for the 1981 Maccabiah Games. Four years later, again representing the United States at squash, he proposed to his future wife Aileen Kennedy in Israel, and in later years both of their daughters played in the Maccabiah Games.

“We are a mixed marriage, so our kids were raised with a little less Judaism than I was raised with,” Roberts said in video produced by Maccabi USA, “and so I was always looking for a way to connect them in a way that felt natural.”

He recalled that his daughters were moved by the symbolic bat mitzvah ceremony held for young Maccabiah participants, prompting the family to decide to “have a normal bar mitzvah for [their] son.” The world of Jewish athletics, Roberts added, “really played a very meaningful role in helping us go through some very complicated and personal issues.”

It also left Roberts with a gold medal and three silver ones from the five times he participated. “These are the only things he has hanging in his office,” said Jed Margolis, executive director of Maccabi USA. Roberts donated squash courts in Ra’anana, Israel and has supported Maccabi USA, hosting the recent send-off party for athletes on the rooftop of Comcast’s Philadelphia headquarters.

“He has a real strong affinity to Israel,” said David Pudlin, a Philadelphia lawyer and Roberts’s squash partner, “and he is a great squash player.”

Described by all as low key and media shy, both calculated and aggressive, Roberts has led Comcast into a series of acquisitions and mergers that have turned the family business into a media giant. The company took over the shopping TV channel QVC, then a chunk of AT&T broadband subscribers, and in 2009 bought the majority holding of NBCUniversal.

According to Forbes Magazine, Roberts’s net worth reached $1 billion last year. His philanthropic giving spans many local and national charities; one of the highlights of his efforts was providing the funding to restore a synagogue located in the historic Eastern State Penitentiary. Donations by Ralph and Brian Roberts allowed the synagogue, which was used in the past by Jewish inmates, to open to visitors in 2009. It was named after Alfred Fleisher, Brian Roberts’s maternal grandfather, who founded the Jewish house of worship while serving as president of the prison’s board of trustees.

Comcast has supported politicians from both parties, as long as they were on the side of its business interests, but Roberts personally has leaned more Democratic. He was a member of the president’s Council on Jobs and Competitiveness and hosted President Barack Obama at his summer home in Martha’s Vineyard. “He is a fiscally conservative Democrat,” said Rendell, who also enjoyed Roberts’s support while governor.

Comcast’s political activity, however, is entrusted to Executive Vice President David L. Cohen. A close confidant of and former top aide to Rendell, Cohen is now in charge of Comcast’s greatest challenge — convincing regulators and Congress that the series of mergers and acquisitions does not make the Philadelphia company into a media monopoly. As described in a recent New York Times article, much of Comcast’s success in Washington has to do with Cohen’s policy of helping out communal and ethnic organizations and in return, gaining their support when needed on the Hill. In one such case, Comcast gave $180,000 to the Baltimore-based Elijah Cummings Youth Program in Israel. In 2010, the organization sent a letter to the Federal Communications Commission supporting Comcast’s acquisition of NBCUniversal.

Cohen is a board member of the Philadelphia Jewish federation and a donor to many local and national Jewish causes.

Another key Jewish officer in the Comcast empire is Arthur Block, the company’s senior vice president and general counsel.

All will now share the burden of selling the Time Warner Cable deal to skeptical regulators, critical members of Congress and to consumer advocates concerned over Comcast’s domination of the market and the company’s problematic customer service record.

On Capitol Hill they will meet opposition led by Senator Al Franken, a Democrat from Minnesota, who in the past grilled Roberts over the NBC deal. Franken has already expressed his “serious reservations” about the Time Warner Cable merger and has called the FCC to apply careful scrutiny before giving it the stamp of approval. He, too, is Jewish.