An Unusual Hanukkah Lamp in Boston 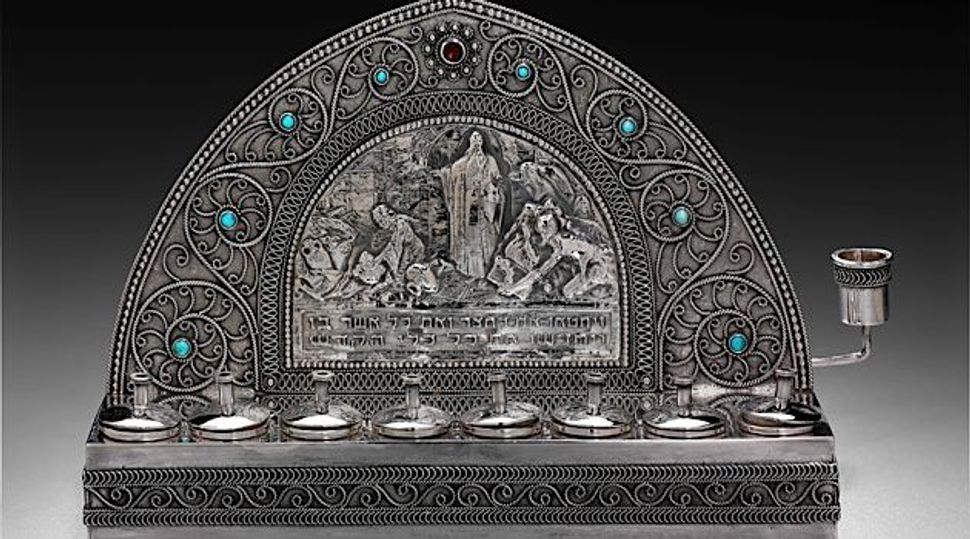 The Truth in Silver: Yehana Yemini?s Hanukkah lamp was created in the 1920?s. Image by Museum of Fine Arts, Boston

At first glance, Yehia Yemini’s 1920s Hanukkah lamp, which was recently acquired by the Museum of Fine Arts, Boston in its 119-object Charles and Lynn Schusterman Collection, looks pretty typical. The silver lamp, supported by four small orbs for legs, contains the correct number of candleholders and an offset well for the shamash. The decorations on the lamp’s back wall are of the type and style that one expects from Jerusalem’s Bezalel Academy.

But the inscription beneath an illustration of several figures, including a high priest tidying the Temple and its overturned vessels, is unusual. Rather than quoting from the Hebrew bible, the inscription cites the apocryphal text 1 Maccabees 4:47-48 (or 48-49 in some editions): “And they purified the (Temple) courtyard and all that was in it, and they renewed all the holy vessels.” Not only do the verses not come from canonical Jewish texts, but they also don’t even refer specifically to the Temple menorah.

“The citation of verses from the book of Maccabees is indeed unusual, based on the research I did for our Hanukkah lamp publication,” says Susan Braunstein, Henry J. Leir curator at The Jewish Museum and author of the 2005 book “Five Centuries of Hanukkah Lamps from The Jewish Museum.” “In fact, the Maccabees appear rarely on Hanukkah lamps before the 20th century.”

The verse does however refer to the renewal of holy objects from the Temple, so it’s not “so far removed from the menorah,” says Braunstein, who can’t recall any other Hanukkah lamps that feature this inscription.

Moshe Bernstein, a professor of Bible and Jewish history at Yeshiva University, thinks the inscription is “peculiar” in that it selects “a text that avoids any reference to the lighting of a menorah, even though the following verse in Maccabees reads, ‘And they lit the lamps on the menorah.’”

According to Bernstein, who is also the David A. and Fannie M. Denenberg chair in biblical studies at Y.U., the Hebrew verses that appear on the Hanukkah lamp in question derive from a translation from the Greek by Isaac Seckel Fraenkel, which Bernstein calls the “standard” Hebrew translation of the Apocrypha in the 19th and early 20th centuries.

Why Yemini chose to use a quotation from Maccabees may not be known, but another Hanukkah lamp in the Schusterman Collection underscores the peculiarity of his selection. The circa 1920 lamp by Ze’ev Raban — whose designs inspired Yemini — contains the inscription “Bezalel, Jerusalem” alongside small illustrations of a harp, a crown, pomegranates, dates, grapes and shofars, and shows the high priest lighting the Temple menorah. The priest, who is mirrored by what might be a doppelgänger, is surrounded by what appear to be musicians (perhaps Levites?).

Above the illustration, an inscription states, “They lit candles in the courtyards of Your holiness. And they enacted eight days of Hanukkah.” That text is immediately recognizable as part of the conclusion of the prayer Al Hanisim (For the Miracles), which is recited on Hanukka. In this tale of two Hanukkah lamps, the straightforward approach of Raban’s lamp underscores just how innovative and curious Yemini’s is.

An Unusual Hanukkah Lamp in Boston