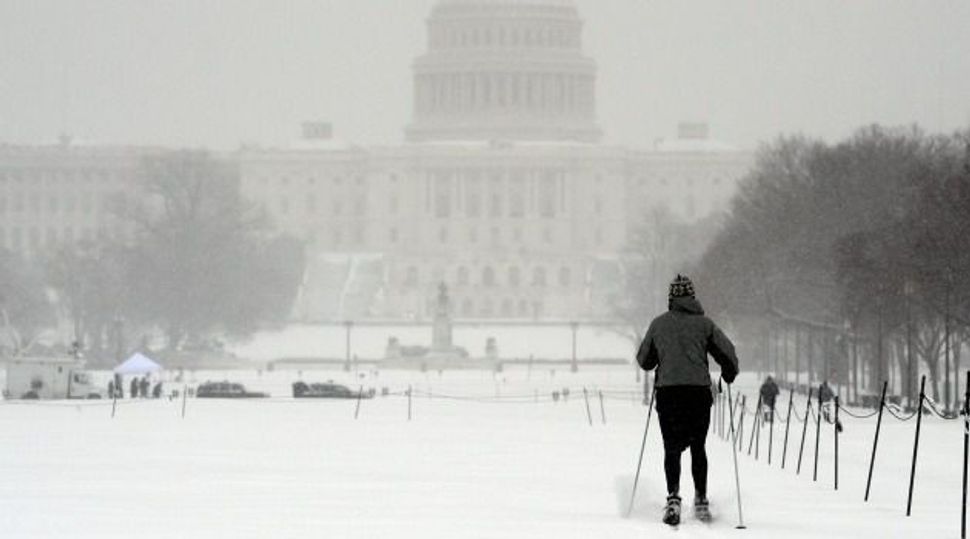 (Haaretz) — This has been an especially brutal winter for the Middle Atlantic region of the United States. At least a dozen winter storms have hit since November, each more punishing than the last.

A few weeks ago, one of these storms caused prolonged power outages across my county. Outages even impacted several congregations here, forcing some to consider canceling Shabbat services. Fortunately, my synagogue was in a position to help some of those congregations, and we offered space for their programming.

I do not write this post to celebrate my congregation’seagerness to help those in need, or our commitment to the principles of hakhnasat orhim (hospitality) and k’lal yisrael (Jewish peoplehood). Those qualities are, no doubt, worthy of celebration and emulation by us all, but I write instead to reflect on the atmosphere generated by fashioning in our synagogue, even if just for one Shabbat, a bigger than normal tent.

The feeling of having multiple communities representing different denominations and traditions under one roof, each doing Jewish its own way, infused our building not only with many more people than usual, but also a palpable sense of energy, dynamism, and vitality. Over Shabbat, nearly every room in the synagogue was filled with people enjoying different forms of spirited prayer, engaging learning, and creative programming. There were multiple study sessions discussing the weekly parashah. There was Torah Yoga and a “Movement and Music” minyan. We had traditional Shabbat worship, kids programming, and a special Shabbat service honoring youth involved in Camp Ramah and USY.

For the most part, each community ran its own programming, but being under one roof enabled folks to sample offerings that would have normally been out of physical range and emotional comfort zone. Multiple congregations even joined together at the end of Saturday morning services for a rousing Adon Olam and communal meal.

Naturally, everyone had to compromise on his or her ideal a little bit in order for this to happen. Most notably, almost no program was held in its perfect space. And accommodating more people and programs on short notice put unusual strain on my synagogue’s administrative and maintenance staff. Ideological compromises had to be worked out as well. For instance, out of deference to my community’s more traditional leanings, services that would have normally featured musical instruments did without guitars for the week.

But these obstacles were imminently surmountable. Some would have been avoided entirely with a little more notice. Some are, in effect, no different than conversations and compromises that happen on a regular basis within individual synagogues: accommodating the needs of diverse constituent groups and programs, enabling people of diverse ideologies to feel comfortable. Such discussions, whether happening within one community or between different communities, are healthy, valuable, and deeply Jewish. And, most notably, the effect of multiple communities coming together for Shabbat was worth the minor discomfort of these challenges.

There is a special vibrancy created when different Jewish constituencies gather together in the same space. We realize that despite our distinctive customs, we can still join for socializing and fellowship. We can value the beauty of each other’s practices and honor the fact that, while they may not work for us, they get the job done for certain populations, without feeling the need to judge their validity or feel threatened by them. We can, if we are open enough, even learn from and be inspired by approaches that we see as valid from our perspective but perhaps had not previously considered. Ultimately, it reminds us that while we are entitled to our differences, we Jews remain brothers and sisters.

In his book “Tomorrow’s Synagogue Today,” Rabbi Hayim Herring argues that collaboration of this type is the future of any successful synagogue. Today’s Jews – especially younger Jews – live in an environment where the Internet enables us to seek wisdom and meaning in a truly borderless context, and social media allows for communal gatherings free of institutional authoritarianism and sluggishness. Our era is marked by limitless consumer choice and easy access to personally tailored experiences of all sorts. As a result, many of us have come to see Jewish institutional boundaries as arbitrary and discouraging of involvement.

True, every community is entitled to its own style, culture, and traditions. And there are good reasons for some of the borders that divide us: It is important for communities to retain a sense of their own identity, and each of us will inevitably gravitate to communities that best reflect our personalities and meet our needs. But there are inevitably times when each of us needs something Jewish that our usual synagogue is not equipped to offer. Having many options in the same space ensures more peoplewill be accommodated more of the time.

More importantly, our synagogues often let borders distract from the fact that we are actually all in the same business: creating Jewish community, providing joyous and meaningful Jewish experiences, and repairing the world. It sometimes makes sense to go it alone in the service of those missions. Frequently, though, we can achieve more together than apart.

Synagogues have little to fear or lose through collaboration, and have much to gain. Hillel serves as a paragon of this reality. I was a committed Conservative Jew when I became involved with the Columbia/Barnard Hillel. I remain a committed Conservative Jew today, but my beliefs and Jewish ties are richer and deeper for participating in a diverse, pluralistic, and inclusive Jewish communal project. Why can our synagogues not emulate that successful model? Why should they not?

So if you ask me, I’d be OK with another snowstorm bringing us together. All things being equal, though, let’s skip the snow, and just get together.