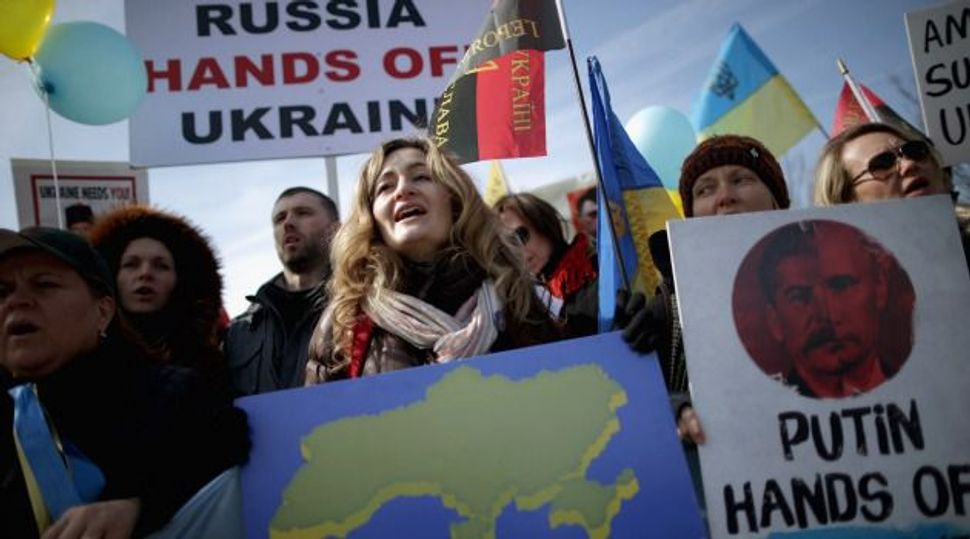 Jews make up just 0.2% of Ukraine’s 44.5 million population. But to hear activists, analysts and commentators discussing the Ukrainian crisis, a listener could be forgiven for thinking that the fate of Ukrainian Jews is one of the central issues at stake.

In recent weeks, Russian and Ukrainian politicians, as well as Ukrainian-Jewish leaders, have argued over the extent to which the revolution is being fueled not just by nationalists but also by anti-Semites.

But to David Fishman, an expert on the former Soviet Union at the Jewish Theological Seminary in New York, “This is a media campaign to affect Jewish opinion and Western opinion, and both sides are playing it.”

Fishman, who is not alone, has a point.

When Russian President Vladimir Putin labels the opposition movement that brought down President Viktor Yanukovich “fascists,” as he did in his news conference on March 4, he is courting a Russian-speaking audience that instantly draws a parallel with Nazism and World War II.

But accusations of Ukrainian anti-Semitism, which Putin also spoke out against, are of little importance to most people in Russia and Ukraine, where the Jewish community is tiny.

The same is not true of the European Union and United States — places where consciousness of the Holocaust as a central historical event gives these labels special traction.

As with many propaganda themes, Putin’s charges have a kernel of truth. Although Russia’s claims of Ukrainian fascists running rampant are exaggerated, a small but significant portion of the forces that overthrew Ukrainian President Viktor Yanukovich are made up of far-right groups.

The nationalist Svoboda party, which won 10% of the vote in parliamentary elections in 2012 and holds four positions in the interim government, is widely regarded as anti-Semitic. It’s leader, Oleg Tyagnibok, and many party members, have a record of anti-Semitic statements.

. Meanwhile, Dymtro Yarosh, whose far-right group, Right Sector played a militant role in the protests, met with Reuven Din El, Israel’s ambassador to Ukraine, on February 26, and promised to suppress anti-Semitism. According to the BBC, the Right Sector views even Svoboda as “too liberal and conformist.”

Estimates for the number of Jews in Ukraine vary widely, a common problem across the former Soviet Union where decades of state-enforced atheism and high rates of intermarriage complicate Jewish identity.

In a 2001 census, 103,000 Ukrainians identified as Jewish, according to the Euro-Asian Jewish Congress. The Israeli government estimates that about 85% of Ukrainian Jews play no role in communal life.
“They’re visible only to Westerners,” said Zvi Gitelman, a professor of political science at the University of Michigan who specializes in the former Soviet Union. “Within Ukraine itself, the Jews as a body play no role at all.”

Nevertheless, after Putin condemned the movement that ousted Yanukovich as one dominated by “nationalist and anti-Semitic forces,” a coalition of Ukrainian-Jewish leaders signed an open letter to him objecting vigorously. Ukrainian nationalists, the Jewish leaders wrote, are being tightly controlled by the new government, adding that they “do not dare show anti-Semitism or other xenophobic behavior…. which is more than can be said for the Russian neo-Nazis, who are encouraged by your security services.”

The letter was published by the Vaad of Ukraine, an umbrella group that says it represents 265 Jewish organizations from 94 Ukrainian cities.

Although the Vaad represents a large percentage of the small number of Jewishly active members of Ukrainian society, it is by no means representative of the community as a whole.

One symbol of that fracture can be seen in the wildly different actions of two of Ukraine’s leading rabbis over the past few months.

In the waning days of President Viktor Yanukovich’s power, Moshe Reuven Azman, a Chabad-Lubavitch rabbi, warned Jews to flee Kiev and, if possible, Ukraine, citing the possibility of anti-Semitic attacks from anti-Yanukovich protestors.

Meanwhile, Kiev-based Yaakov Dov Bleich, a Karliner-Stoliner hasid from Brooklyn, has consistently played down the threat of anti-Semitism from the revolution.

Both rabbis claim the mantle of chief rabbi of Ukraine.

In January, two men were injured in separate attacks after leaving Bleich’s synagogue in Kiev. One man, a kollel student was stabbed. The other, a Hebrew teacher, was beaten.

“We tend to not believe this is the work Ukrainian nationalists,” Bleich said. “But we don’t have any proof.”