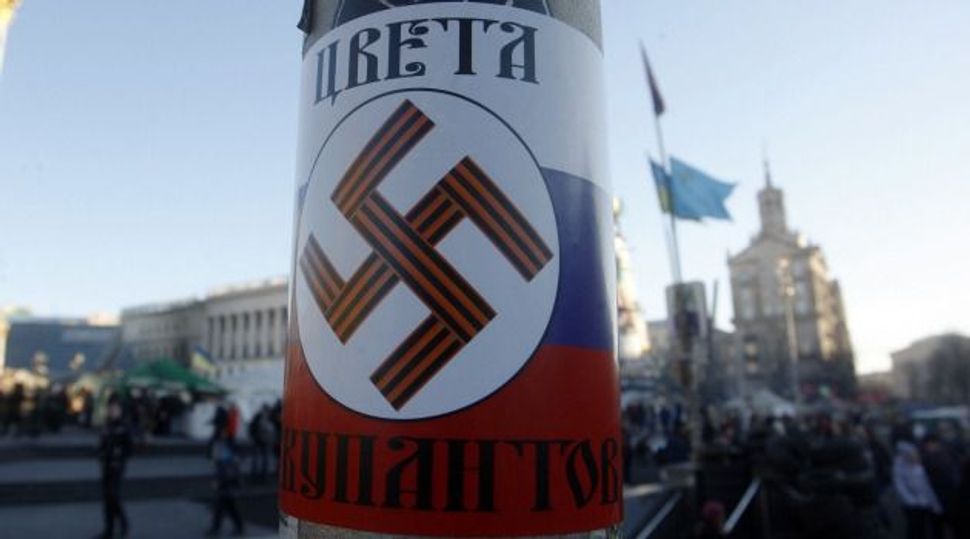 He may lack the cachet and recognition of the Anti-Defamation League’s Abraham Foxman, but in the federal government’s sprawling bureaucracy, Ira Forman is the only official tasked with identifying and addressing anti-Semitism worldwide on behalf of the United States.

Now, suddenly, with Ukraine in crisis, Forman’s usually low-profile brief is front and center, as he is charged with making the call on whether the country’s Jewish community is now under threat.

As supporters of Ukraine’s new interim government and Russian leaders hurl anti-Semitism charges at each other, Forman is calling out Russia — and Russia alone — for peddling politically motivated accusations of Jew hatred, allegedly instigated by the new government in Kiev.

In an exclusive interview with the Forward, Forman made clear that Washington does not share Putin’s view that Ukraine’s Jews are under threat. “We have no indication that what President Putin has been saying about anti-Semitism has been a true reflection of what’s happening on the ground,” he said.

Forman is treading cautiously on the question of anti-Semitism following the Ukrainian revolution and Russia’s subsequent deployment of troops into Crimea, a sovereign territory of Ukraine. On the one hand, the administration does not take lightly reports of anti-Semitic incidents that have occurred in recent weeks. But on the other hand, the administration wants to avoid giving credence to Moscow’s attempt to make political gains based on these reports.

The call made by the State Department’s special envoy fits well with the administration’s policy which views Russia as the aggressor in the dispute.

But some independent experts stress that players on both sides of the conflict, not just Russia, are playing the anti-Semitism card. “This is a media campaign to affect Jewish opinion and Western opinion, and both sides are playing it,” David Fishman, a professor of Jewish history at the Jewish Theological Seminary in New York, told the Forward.

Forman, more cautious, acknowledged that players on both sides “could come under suspicion for the incidents we already have, playing an anti-Semitic card.”

On the Russian side, Putin has repeatedly described the nationalists in Ukraine who helped to unseat the democratically elected President Viktor Yanukovych in February as fascists and anti-Semites. Russia’s state-controlled media have warned of a “second Holocaust” that would be brought upon Jews by leaders of the new Ukrainian regime, who are often described as fascists.

In these denunciations, Putin appears to be singling out supporters of two right-wing nationalist factions, Svoboda, whose leader has a record of many anti-Semitic statements and Right Sector, which recently promised Israel’s ambassador in Kiev to curb anti-Semitism within its ranks. Both parties played key roles in ousting Yanukovych.

It remains a fact that the past few months have seen several serious anti-Semitic attacks in Ukraine. In February, a synagogue in Crimea was daubed with anti-Semitic graffiti, and a synagogue in Zaporizhia was firebombed. In January, two men were injured in separate attacks after leaving a synagogue in Kiev. One man, a student, was stabbed. The other, a Hebrew teacher, was beaten.

Forman, while stressing that the United States has been closely monitoring events, does not believe these incidents and the role that right-wing nationalists play in Ukraine’s new government amount to an anti-Semitic outbreak or to an imminent fascist takeover.

Forman is a political appointee who was sworn in as special envoy on anti-Semitism last May. He came to the post after decades in Democratic Party politics, including heading the National Jewish Democratic Council and, most recently, serving as the Jewish outreach liaison for Obama’s 2012 presidential campaign. He is only the third official to fill the special envoy post, which was created in 2006 following Congress’s passage of a law requiring annual reporting on global anti-Semitism. Since taking office, at least up to now, Forman’s main focus has been on the upsurge of anti-Semitism in Hungary.

A trip Forman took to Ukraine in November, before political turbulence struck there, demonstrated to the new special liaison how complex the task of assessing anti-Semitism can be, especially in countries determined to deny the problem exists. During meetings in Ukraine’s major Jewish communities, in Kiev, Lviv and Dnipropetrovsk, Forman heard a strikingly uniform message from Jewish activists and Ukrainian local officials: There is no problem of anti-Semitism in Ukraine. Forman was skeptical. Finally, when meeting with a Chabad rabbi, he received an explanation. “I’ve been getting calls from local government officials to make sure I tell you there is no anti-Semitism,” the rabbi told Forman.

“They essentially were told to tell me that,” Forman said. To the envoy, this indicated that the government, then controlled by Yanukovych, was determined at all costs to project an image of vigilance to the West concerning anti-Semitism. On the other hand, even the Chabad rabbi who disclosed this to him did not report actual concern about anti-Semitism.

Now Forman and the administration are relying on some of these same Jewish leaders as a key resource for determining the state of anti-Semitism in post-revolution Ukraine.

During a recent conference call convened by the All-Ukrainian Jewish Congress, 27 of the 29 representatives of communities across the country reported that they had seen no increase in anti-Semitism. The two regional representatives who expressed concerns accused pro-Russian groups of using anti-Semitic language.

The Ukrainian Jewish community’s testimony on this issue has been instrumental in shaping the Obama administration’s response to Russian claims of increased anti-Semitism.

A State Department fact sheet, issued on March 5 and titled “President Putin’s Fiction,” rebuts Putin’s claim that there have been mass attacks on churches and synagogues in Ukraine by citing the Jewish community. “Jewish groups in southern and eastern Ukraine report that they have not seen an increase in anti-Semitic incidents,” the official release stated.

But as Forman knows from his visit to Ukraine and from the country’s history the situation on the ground is far from settled. When describing just how complex the issue is, Forman resorts to a professor he met at the Catholic University, in Lviv, who told him, “When you first think you’re understanding Ukraine, that’s the exact moment you know that you don’t know.”