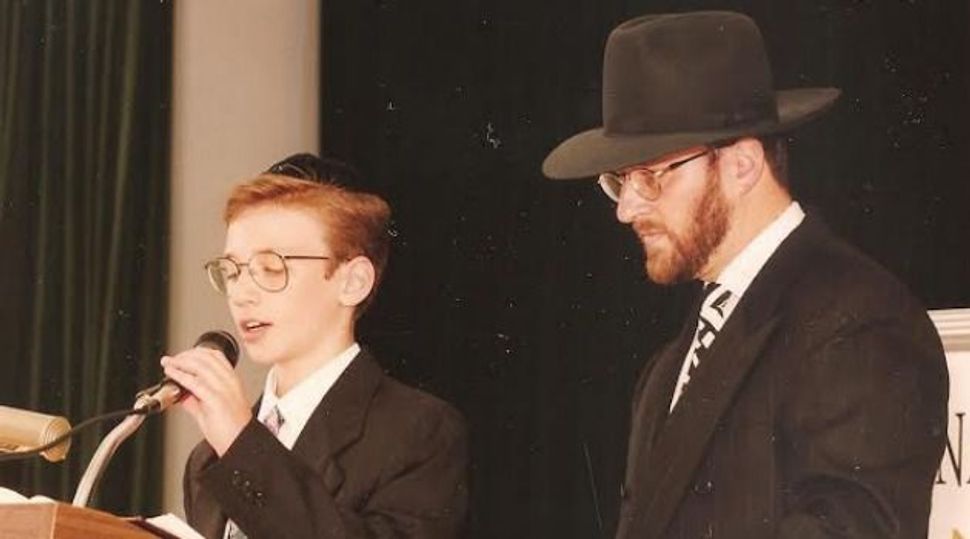 Like Father, Like Son: Eliyahu Fink speaks at his bar mitzvah in 1994 as his father, Aaron Fink, looks on. Image by Peter Carr

Aaron Fink likes to tell an anecdote about his oldest son: When Eliyahu Fink was in grade school, he discovered an error in ‘The Little Midrash Says,’ a children’s book about weekly Torah portions.

The precocious child sent a handwritten letter to the author, asking him why he apparently confused the dates on which God created certain animals.

When Eliyahu Fink — who like his father, is an Orthodox rabbi — tells the story, he adds one vital detail: the role his parents played when he told them about discovering the mistake.

Encouraging critical thinking may well run in the Finks’ bloodline, along with a commitment to Jewish faith and learning. The younger Fink continues a five-generation tradition of rabbis.

“They both love people. They both accept people for what they are,” said Louise Fink, 73, of Baltimore, who is the mother of Aaron Fink and grandmother of Eliyahu Fink. “And they are both devout Jews and they are both charismatic people.”

Read All of America’s Most Inspiring Rabbis 2014

Both father and son were nominated for the Forward’s list of Most Inspiring Rabbis this year.

Eliyahu, 32, and the rabbi of the Pacific Jewish Center in Venice Beach, Calif., was chosen because of the open and honest way he approaches issues pertaining to the Jewish community, dismantling “the image of a stern, judgmental Orthodox rabbi with no interest in open dialogue or transcending religious and cultural barriers,” as Tova Ross wrote in her nomination. Another nomination described him as “Gadol HaInternet”: Eliyahu has more than 4,500 followers on Facebook and Twitter, and maintains his blog, finkorswim.com, a play on “sink or swim.”

His father, dean of Ateres Bais Yaakov in Monsey, N.Y., received a separate acknowledgement in the form of an appreciation by Forward writer Frimet Goldberger, who praised his generosity and refusal to be bogged down by sectarian divisions.

Although Aaron Fink lives on the opposite side of the country, he is a constant presence and inspiration in Eliyahu Fink’s life.

“There is nobody I talk about more when I talk about Orthodox Judaism,” the son says, adding that he often uses him as a role model.

He especially admires his father’s ability not to judge and be open to Orthodox Jews who experience rejection elsewhere. One nomination describes the 54-year-old as a “one-man welcoming committee” of a community that “enacts walls to push both outsiders and insiders away.”

Both men showed signs of being leaders at a young age, Louise Fink, noting that both are oldest siblings.

“They both lead nicely, not bossy,” she said. “They just lead.”

Even though Aaron Fink’s father, grandfather and great-grandfather were rabbis (as well as Eliyahu Fink’s maternal grandfather) both men started out with different plans for their lives.

Aaron Fink envisioned going to medical school, until he realized that he enjoyed working with children when he helped at a summer camp.

“There are a lot of good doctors out there, but not a lot of good educators,” he says. The father of seven was ordained at Ner Israel Rabbinic College in Baltimore in 1981, and runs the girls’ school as well as Camp Regesh, an Orthodox summer camp, in Monsey.

Eliyahu spent two years as a full-time yeshiva student after he got married. But even then, he didn’t expect to become a pulpit rabbi.

Eliyahu got a taste of what it means to be a rabbi when he took an outreach job counseling Jewish students in L.A. He went on to study law, and applied to be a part-time rabbi at the Pacific Jewish Center, also known as “Shul on the Beach”. After he graduated, it turned into a full-time job.

“I realized that after law school I had grown into my position as rabbi,” he says.

Now, instead of sending handwritten letters to authors, he starts debates online. But what his father and mother taught him early on is still relevant to him today.

“One of the most important things for me,” he says, “is to tell people that questions are questions.”