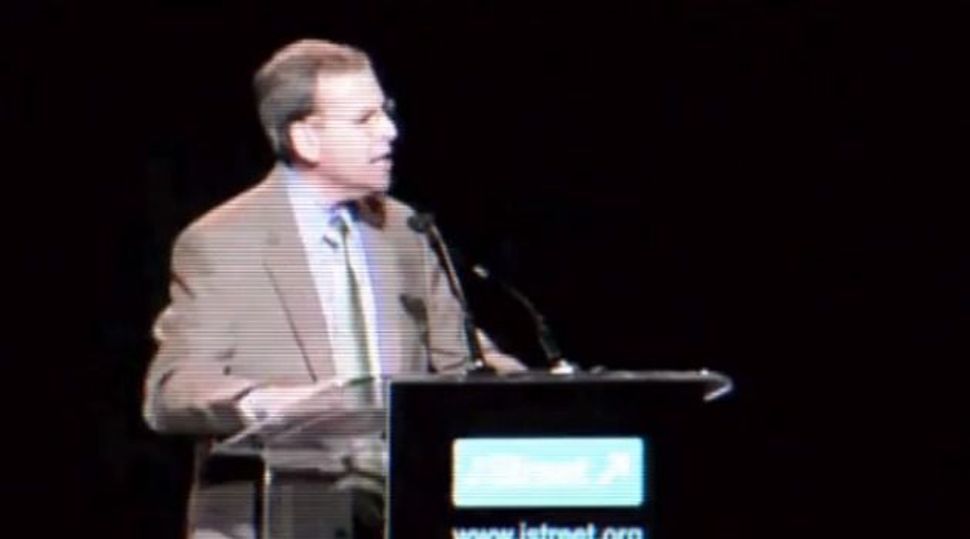 J Street, the dovish Israel lobby that has struggled for acceptance in the wider Jewish community, is facing its greatest challenge yet. In the coming weeks, the Jewish establishment’s most prominent gatekeepers will vote on whether J Street can come under the proverbial communal tent.

The odds of success for J Street’s bid to join the Conference of President of Major American Jewish Organizations are not clear. But acceptance in organized Jewry’s primary umbrella group for Israel-related issues would constitute an official mainstream stamp of approval for J Street six years after its founding.

Now, a controversy has erupted in one of the nation’s largest Jewish communities that highlights the bumpy road the group still faces.

At issue is a March 27 event sponsored by the Jewish Federation of Greater Philadelphia and by the local Hillel, titled “What It Means To Be Pro-Israel.” The answer to the question, at least in the eyes of the organizers, is revealed in the event’s content: It will feature a screening of a full-length anti-J-Street documentary and a panel made up mainly of critics of the organization.

The upcoming event has sparked an angry debate within the Philadelphia community, the nation’s fourth largest, and has brought to the surface accusations against the Jewish federation’s leadership and its decision-making process. “Political views on the right are listened to more, because the few people donating large amounts of dollars are on that political side,” said Jill Zipin, a community activist who has protested the decision to sponsor the event. “The Jewish federation shouldn’t be a tent of one Jewish donor.”

Panelists at the event, which will take place on the University of Pennsylvania campus, include Harvard law professor Alan Dershowitz, a staunch defender of Israel and just as staunch a critic of J Street; Charles Jacobs, who heads the group that produced the anti-J-Street film, and Sara Greenberg, a Harvard University graduate student who has been active in fighting attempts to boycott Israel.

Supporters of J Street have taken issue with the makeup of the panel and, more importantly, with the movie that will be the evening’s centerpiece. The J Street Challenge, released earlier this year, is a documentary aimed, according to the film’s official synopsis, at “examining and debating J Street’s message and its leaders.” It does so through clips from speeches of the lobby’s leaders and a series of interviews with experts, almost all of them known as leading critics of the group. Speakers in the movie accuse J Street of “dividing the Jewish community,” of being “imperialistic” and of manifesting “arrogance” in their views on Middle East peace. The J Street Challenge was produced by Americans for Peace and Tolerance, a not-for-profit organization devoted to fighting Islamic extremism.

Though not shown in commercial screenings, the documentary is being presented to Jewish gatherings, at Jewish community centers and in private screenings sponsored by local groups across the country. It was also presented by an advocacy group on the sidelines of the recent policy conference of the American Israel Public Affairs Committee to a room packed with AIPAC delegates.

But the Philadelphia federation will be the first Jewish federation in the country to sponsor a screening of the movie, a fact that has drawn more attention to its event.

In a letter to Philadelphia’s federation interim CEO, Alex Stoker, Rebecca Kirzner, J Street’s regional organizer for the Mid-Atlantic region, protested the event. “There is a difference,” she wrote, “between open and honest debate over policy and strategy… and a film designed to defame and personally attack those with different viewpoints.”

Community members who were taken by surprise when the program was announced voiced similar complaints.

Three years ago, following a similar controversy over an event in which J Street representatives were scheduled to speak, the Philadelphia Jewish Community Relations Council formed a committee tasked with defining guidelines for pro-Israel events. The group’s report was handed to the federation, but leaders ignored the vetting process it recommended when deciding to sponsor the March 27 event. “None of that was followed, zero,” said Dan Segal, who was on the committee. “The idea that J Street bashing is appropriate and that the federation will sponsor it is unacceptable to me.”

Marc Zucker, a former JCRC chair who was also on the committee, wrote to Stroker: “I worry that each time Federation takes one step forward toward engagement and pluralism, it takes two steps back. This backward-looking, divisive and mean-spirited event is unworthy of Federation’s mission.”

The federation rejected the criticism of its decision and made clear that the event will go ahead as planned. In a written comment provided to the Forward, Stroker said that while there may be many views on Israeli policies, “as a federation we support the State of Israel and its democratically elected government.” Stroker went on to accuse communal groups of making “false accusations” regarding the federation’s relations with J Street.

A similar debate took place at Hillel of Greater Philadelphia, which is also sponsoring the event. Members of J Street U complained to the board about not being consulted despite being an official member group of Hillel. “It was very frustrating because we felt we were an integral part of the community and now we are singled out,” said Jake Gutman, a Penn senior who is active in J Street U Penn.

Unlike the Philadelphia federation, Hillel leadership expressed some second thoughts about its decision to sponsor the event. “In retrospect, the board regrets that the student voice was not included in the conversation,” a statement issued by the group said. Hillel also expressed its concerns about screening the movie, but it concluded that “nonetheless, we believe that as it is planned, the program will serve an important purpose.”

J Street’s battle in Philadelphia may provide a sense of what the group can expect as it embarks on its bigger endeavor to join the Presidents Conference. Jeremy Ben-Ami, J Street’s executive director, will make his formal presentation to the Presidents Conference’s nominating committee April 10, and at the end of the month all member organizations will vote on whether to admit the group.

Officials with Jewish organizations represented in the Presidents Conference said J Street has been reaching out in recent months to groups to ensure their support, but it is still not clear if it has a majority among the umbrella organization’s 51 members.

J Street and the Presidents Conference would not respond to questions on this issue.