Was Daniel’s ‘River of Fire’ Really the Milky Way 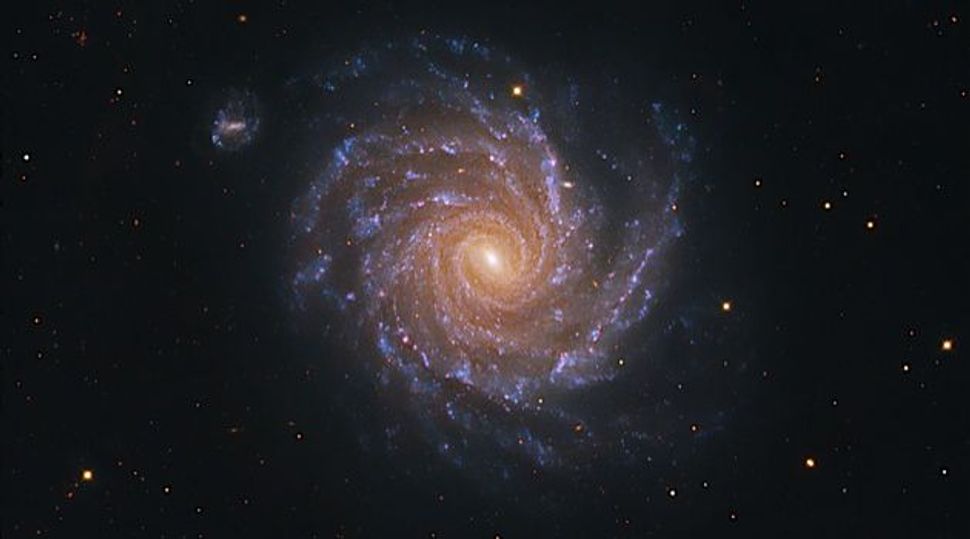 Stellar By Starlight: When telescopes became more powerful, astronomers grew to understand that the sky was full of galaxies, such as Spiral Galaxy NGC 1232 (pictured above). Image by Wikimedia Commons

A reader signing his or her name as “ASP” asks: “In her book ‘The Passover Seder,’ Ruth Gruber Fredman wrote that the galaxy is called seder or ‘order’ in Hebrew. Is this true?”

Exactly what Ruth Gruber Fredman wrote in her book, I don’t know, but seder, while it does mean “order” in Hebrew, does not and cannot mean “galaxy.” The only usage the word is found in that might remotely suggest such a meaning is the rabbinic expression sidrey b’reshit, “the orderings [of the world] from the beginning of time,” a phrase that might be more idiomatically translated as “the laws of nature.” The laws of nature, however, are not a galaxy, though they might explain how one is formed.

Indeed, the ancient Greek word galaxias, from which, via Latin, our English “galaxy” derives, did not mean “galaxy,” either — nor could it have meant that, since the scientific concept of a galaxy in the sense of an independent gravitational system of billions of stars, an estimated 170 billion of which are spread throughout the universe, did not exist until relatively recently. Rather, galaxias (from gala, “milk”), meaning “the milky one,” was the Greek word for the Milky Way, the densely clustered band of bright stars to which our solar system belongs. Its name comes from a Greek myth telling how Zeus’s son Herakles, while nursing at the breast of his adoptive mother, Zeus’s wife, Hera, was pushed away by her so abruptly that her milk sprayed into the night sky, each drop becoming a star.

In Jewish tradition, the Milky Way is called “the River of Fire,” a term occurring both in its Hebrew form of nehar ha-esh and its Aramaic form of nehar di-nur. The Aramaic is older and is found in chapter 10, verse 7 of the book of Daniel. There, Daniel describes having a “night vision” in which God’s throne was “like the fiery flame, and its wheels as burning fire. A river of fire [nehar di-nur] issued and came forth before him: a thousand times a thousand attended him, and ten thousand times ten thousand stood at his service….”

Was Daniel actually referring to the Milky Way? When one considers that his millions of God’s “attendants” must have been angels and that in his age — which is to say, in the second-century BCE — the stars were commonly thought to be angelic beings, he quite possibly was. What other part of the sky is so packed with stars? The rabbis of the talmudic period clearly thought that the River of Fire, far from belonging only to Daniel’s vision, was an objective feature of the heavens. In the talmudic tractate of Hagigah, for example, there is a belief attributed to the renowned Babylonian sage Rav: “Every single day, ministering angels are created from the River of Fire and sing [before God], and cease to exist.” Elsewhere in the same passage, the somewhat different view is ascribed to Rav that the stars of this river are drops of sweat fallen from the attending angels as they rush about, serving their Maker.

Of course, although there may be a distant echo here of the sky-spattering drops of Hera’s milk, this still doesn’t prove that Rav was identifying the River of Fire with the Milky Way. Confirmation of such an identification comes from another passage in the Talmud, this one in the tractate of Berachot, where Rav’s contemporary and fellow Babylonian Shmuel is quoted as saying, “If the tail of Scorpio weren’t in the River of Fire, no one stung by a scorpion would ever live.” Shmuel was a star watcher — “I know the paths of heaven as well as I know those of [his hometown of] Neharda’a,” he boasts in the same place in Berachot. And while it isn’t quite clear what he had in mind (does the sweat of angels magically mitigate the effects of a scorpion’s sting on earth?), the tail of the constellation of Scorpio is indeed just inside the Milky Way.

As for “galaxy,” it was originally in English a word for the Milky Way, too. “Lo, the Galaxye which men clepeth the Milky Way, for hit is whyt,” Chaucer wrote, and the word continued to be used exclusively in this sense throughout the 19th century. It was only with the development of sufficiently powerful telescopes that astronomers came to the conclusion that the cloudy patches in the sky, known since the 18th century as nebulae (from Latin nebula, “fog” or “mist”), were in fact independent star systems resembling the Milky Way. By the early 1920s the debate was over: Space, it was agreed on, was full of “Milky Ways,” and while the term “Milky Way” continued to be used for the Milky Way itself, “galaxy” now began to signify any of the other Milky Way-like clusters of stars in the universe.

And how do you say “galaxy” in Hebrew? That’s an easy one. Galaksiya, naturally.

Was Daniel’s ‘River of Fire’ Really the Milky Way