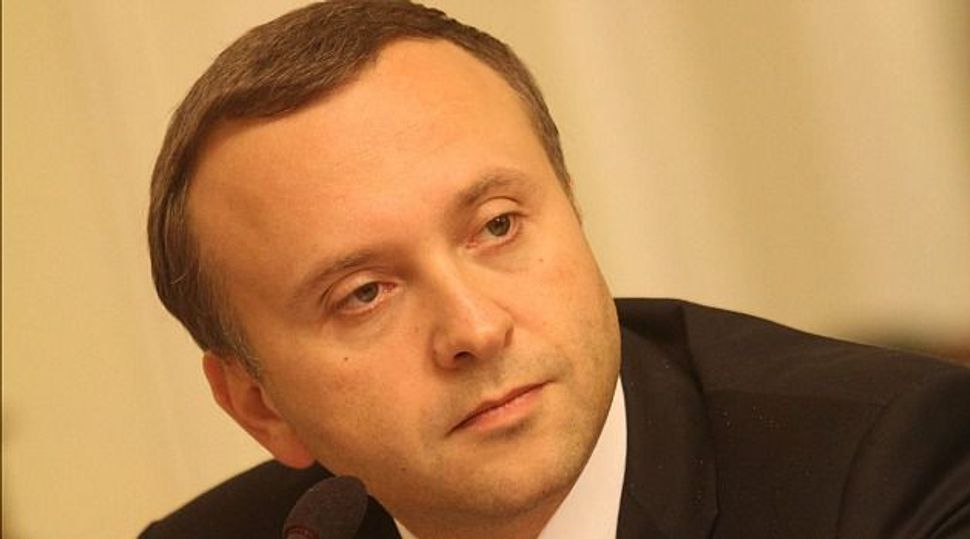 Image by courtesy of eduard dolinsky

Jews in Russia and Ukraine are divided as the two nations teeter on the brink of war.

That’s according to the director general of the Kiev-based Ukrainian Jewish Committee, Eduard Dolinsky, who was in New York to drum up support from American Jewish leaders.

Dolinsky said that Ukrainian Jews were dismayed recently to see Russia’s chief rabbi, Berel Lazar, among the applauding crowd as the Russian president, Vladimir Putin, announced the annexation of Crimea.

Lazar was shown on television March 18, seated alongside other religious leaders at a gathering of Russia’s political elite in the Kremlin’s St. George Hall.

“We understand that [Lazar] was there not because he supports Crimea’s annexation, but because he was forced to do this,” Dolinsky told the Forward in a March 25 interview at the Park Lane Hotel, in New York.

“Nevertheless, all those Russian [actions], they affected the relationship between Ukrainian and Russian Jewish communities, and I think that in the near future we need to sit down with our Russian Jewish friends and talk about how we can come out of this difficult situation [and] not be victims of this political game.”

A spokesman in Russia for the Federation of Jewish Communities, which Lazar leads, strongly refuted Dolinsky’s claims.

The spokesman, Boruch Gorin, said that Lazar’s participation at the Kremlin event was purely ceremonial. He said that Lazar, a Chabad Hasid who is renowned for his close ties to the Kremlin, stays out of politics and does not support or oppose the annexation of Crimea.

He added that Jewish organizations and their leaders in Ukraine and in Russia should stay out of politics.

Gorin said that there were many Jewish groups in Ukraine and that he had never heard of Dolinsky until a couple of weeks ago. “If Mr. Dolinksy has any problems with us… we are ready to hear all his complaints,” he said.

He admitted that many of the estimated 17,000 Jews living in Crimea welcomed the annexation. But he said that “the euphoria will soon disappear” if Ukrainians stop visiting the peninsula, which is heavily dependent on tourism.

Lazar recently appealed for unity among Russian and Ukrainian Jews.

On March 17 he issued a letter to the Ukrainian Jewish community, calling on Jews to be voices for peace and not a factor for disunity.

The following day, Lazar issued a letter that Russian and Ukrainian Chabad rabbis signed to state that they would not become involved in politics and to call for unity and peace.

Two of the most prominent Chabad rabbis in Ukraine, Moshe Reuven Azman of Kiev and Shmuel Kamenetsky of Dnipropetrovsk, did not sign the letter.

Kamenetsky told the Forward on March 25 that although he declined Lazar’s request to sign the letter, he approved of Lazar’s conduct.

“I wonder what Mr. Dolinsky would do in [Lazar’s] place,” Kamenetsky said. “[Lazar] is doing what he has to do… but we in Ukraine can think otherwise and say otherwise and want what we want.”

Jews and anti-Semitism have played a prominent role in Russia’s propaganda war against the Ukrainian revolution.

There have been several anti-Semitic attacks on Jews and on synagogues in Ukraine since the start of the year. Russian officials, including Putin, have accused the groups that swept former president Viktor Yanukovych from power in February of consisting of fascists and anti-Semites.

Nationalists have played a small but significant role in the Ukrainian power struggle. The nationalist Svoboda party, which has spouted anti-Semitic rhetoric in the past, has four posts in the interim government.

Dolinsky said that he had little doubt that anti-Semitic rhetoric will reappear in the run-up to Ukraine’s May 25 presidential elections. But he repeated previous statements made by Ukrainian Jewish leaders that there has been no increase in anti-Semitism in Ukraine and that any anti-Semitic incidents may have been carried out by pro-Russian provocateurs. Dolinsky said that he had no evidence to support this assertion, other than the fact that Russia has the most to gain from such incidents.

Dolinsky arrived in New York from Kiev on March 24 to appeal to American Jewish leaders for support.

He said that after months of political turmoil in Ukraine, the situation has gone “from bad to worse,” with Russia’s annexation of Crimea, the buildup of Russian troops on Ukraine’s eastern border and Ukraine’s weakening currency, which has lost about 25% of its value since the start of this year.

“The Jewish community in Ukraine feel anger and sadness and psychologically isolated, and therefore we [need] messages that American Jews can send to Ukrainian Jews of solidarity and support,” Dolinsky said.