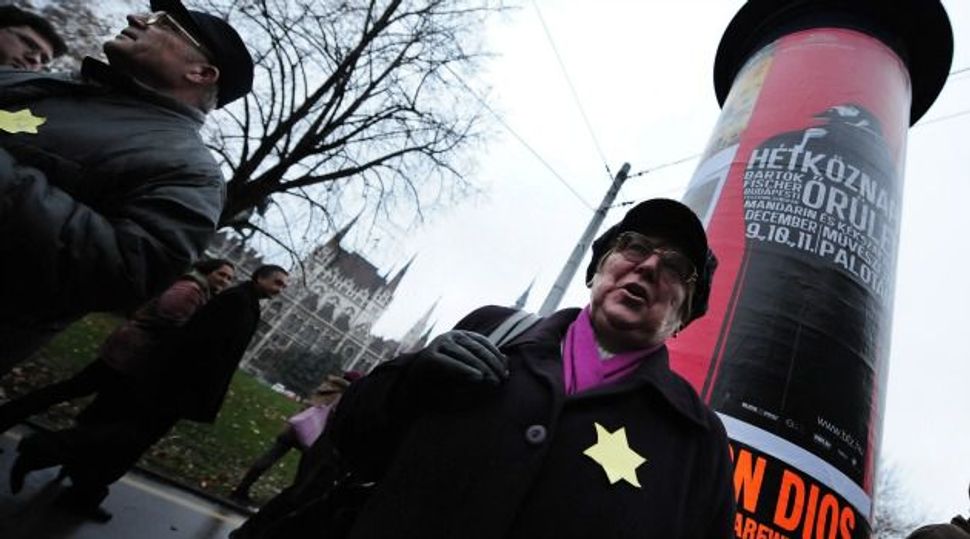 (JTA) — In 1944, Andras Szasz’s mother obtained an admittance slip to a Red Cross children’s home that she hoped would save her 8-year-old son from the Hungarian fascists then prowling Budapest in search of Jews to torture or kill.

Szasz never made it to the home.

In the summer of 1944, he and his mother were forced to relocate to one of 2,000 yellow star houses, a network of apartments where nearly 200,000 Jews were held captive as they awaited deportation. Groups of about a dozen people were forced to share one room while an attendant guarded the entrance, permitting the occupants to leave only for brief periods in which they could buy certain goods.

“The people who did this were all Hungarians,” said Szasz, who escaped the house with his mother and survived the war in hiding. “I never even saw a German soldier up close.”

Seventy years later, Szasz’s story and others like it are reaching new audiences thanks to a grassroots memorial project born out of anger over what many see as the Hungarian government’s attempt to whitewash the country’s role in the murder of Jews during the Holocaust.

The Yellow Star Houses Project aims to increase public awareness of Hungary’s complicity with Nazi Germany through the stories of those once held in the apartments. A team of volunteers has catalogued hundreds of personal accounts and compiled an online map of the 1,934 yellow star houses that once dotted the Hungarian capital. A series of public events are being planned around the houses this year, the 70th anniversary of Germany’s invasion of Hungary.

Despite the prominent role of Hungary’s fascist government in the annihilation of half a million Jews, the current government plans to remember the victims by unveiling a statue next month that some see as portraying Hungary as a victim of German aggression. The memorial depicts an eagle attacking an angel.

Though Hungarian officials repeatedly have acknowledged their country’s complicity under the wartime regime of pro-Nazi leader Miklos Horthy and his successor, Ferenc Szalasi, the government is insisting on the design as a way to remember all the Nazis’ victims. That attitude has caused a rupture between Prime Minister Viktor Orban’s government and Hungarian Jewry, whose leadership has accused the government of pandering to nationalist voters ahead of April 6 elections.

“Watching how Jews are being erased from the official Holocaust commemoration, we decided to provide an alternative,” said Istvan Rev, the historian who is leading the Yellow Star Houses Project.

We want to “preserve the dignity of both the victim and survivors in spite of the maneuvering of the government,” said Rev, the archive’s director.

The main activity is slated for June 21 – Hungary’s Long Night of Museums, when cultural institutions throw open their doors for hundreds of thousands of nocturnal visitors. Coincidentally, it is also the first day in 1944 when Jews were no longer allowed to live outside yellow star houses.

The plan is to have Holocaust survivors such as Szasz participate in remembrances in front of the 1,600 yellow star houses still standing. In addition, Rev’s team has set up a website in English and Hungarian that shows each house on a map and encourages the public to provide information about them for an online archive. The team also has arranged for the filming of a documentary.

Volunteers are busy as well placing yellow star stickers on the actual buildings in the hopes of eliciting testimonies from elderly people still living in the area and motivating the present tenants to participate in the alternative commemorations.

Many activists say they would have preferred the government do nothing rather than offend the memories of Holocaust survivors with some of its recent activities, such as appointing historian Maria Schmidt to head a $22 million Holocaust museum now under construction.

Schmidt has said Nazism was no worse than Soviet communism, prompting both Yad Vashem, Israel’s national Holocaust memorial museum, and Mazsihisz, the umbrella group of Hungarian Jewry, to decline to cooperate with her museum.

In January, the government appointed another controversial historian, Sandor Szakaly, to head the newly established Veritas Historical Research Institute. Szakaly said in an interview that month that the 1941 deportation and subsequent murder of tens of thousands of Jews was an “action of the immigration authorities against illegal aliens.”

“Clearly this government is not qualified to commemorate the Holocaust,” said Karl Pfeifer, a prominent Jewish journalist who was raised in Budapest and now resides in Vienna.

These and other controversial appointments – not to mention the xenophobic rantings of the increasingly popular ultranationalist Jobbik party – remind Agnes Horvath, 78, of dark periods.

A Holocaust survivor and former yellow star home occupant, Horvath saw her mother die of lung injuries sustained during a savage beating by Hungarian fascists shortly after Hungary’s liberation by the Red Army.

“When I see this around me,” Horvath said, “I feel like it’s the 1930s again and I’m reminded that this could happen all over again.”