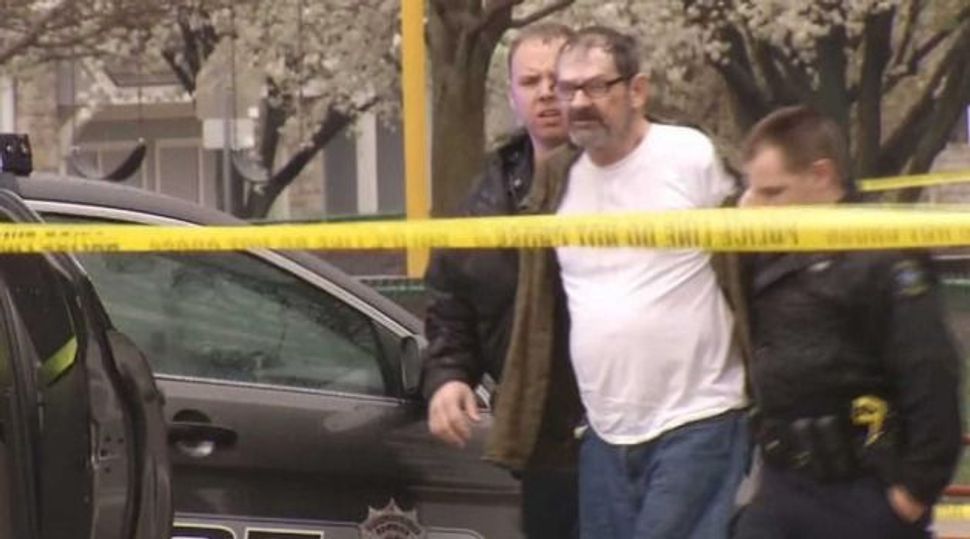 Just hours after a white supremacist allegedly murdered three people at a Jewish community center and a Jewish retirement home outside Kansas City, the local police chief insisted that nothing could have been done to stop the shootings.

“This was, unfortunately, totally unexpected,” Overland Park Police Chief John Douglass told a news conference. “If we had the slightest hint it was going to happen, we would have done everything we could to stop it.”

Yet the arrest came as less than a shock for anti-extremist investigators who have tracked Frazier Glenn Cross, also known as Frazier Glenn Miller, since the 1970s.

“I thought, ‘Wow, someone I’m so familiar with has done something so heinous,’” said Heidi Beirich, who leads the Southern Poverty Law Center’s Intelligence Project. “On the other hand, what do you expect? These views drive a lot of people to do this kind of violence.”

Beirich’s group has clashed repeatedly with Miller since the 1980s, and she knew him particularly well. Last fall, while trying to get in touch with racist serial killer Joseph Paul Franklin, Beirich had a series of hour-long conversations with Miller, who knew Franklin. Despite knowing that Beirich was an investigator for the SPLC, the white supremacist was eager to talk to her.

“He was trying to convince me about how evil the Jews are, basically,” Beirich said of her conversations with Miller. “When you talk to him on the phone, he sounded like an older man who had crazy, scary views. You don’t expect someone who’s 73 years old to pick up a gun and do this.”

The alleged assailant shot William Lewis Corporon and his 14-year-old grandson, Reat Griffin Underwood, in the parking lot of the Jewish Community Center of Greater Kansas City at around 1 p.m. on April 13.

A short time later, a woman identifies as 53-year-old Terri LeManno was shot in the parking lot of Village Shalom, a nearby Jewish retirement home where her mother lives.

None of the victims were Jewish. Miller was arrested minutes later in a nearby elementary school parking lot.

The day after the killings, Beirich was still trying to figure out what had triggered the longtime racist radical activist to pick up a weapon and shoot people on that day, after decades in the white supremacy movement. She noted that he had emphysema, and may have felt that his days of being strong enough to carry out such an attack were limited.

She also said that April 13 would have been the 64th birthday of Franklin, who was suspected of up to 20 murders in a racist killing spree and was executed in a Missouri state prison in November.

“Did that play a role? I don’t know,” Beirich said.

Over the course of their conversations, Miller tried to get Beirich to join a racist Web forum on which he was active, called the Vanguard News Network, and debate him there.

“He really thought he was going to convince me of the error of my anti-racist ways,” Beirich said.

“He has been an active white supremacist for over 30 years,” said the Anti-Defamation League’s director of investigative research, Mark Pitcavage, who has also tracked Miller. “He was a very prominent white supremacist.”

A former U.S. Army master sergeant who spent 13 years in the Green Berets, according to the SPLC, Miller joined a neo-Nazi group in the mid-1970s before founding a Ku Klux Klan chapter in the 1980s.

Miller’s KKK group, the Carolina Knights of the Ku Klux Klan, was one of the country’s largest regional KKK groups, according to Pitcavage. At the time, Pitcavage said, KKK groups were engaged in paramilitary activities involving military-style weapons. According to the SPLC, Miller received $200,000 to fund his activities from The Order, an underground white supremacist group that killed Jewish talk show host Alan Berg in 1984.

The SPLC sued him in 1984 for intimidating a witness, then assisted federal prosecutors in a 1986 criminal trial against him. According to the SPLC, witnesses testified at the 1986 trial that Miller had received 13 anti-tank rockets from military personnel.

Though Miller was found guilty of criminal contempt, he jumped bail and disappeared soon after. He was caught by the FBI in a trailer in Missouri that was loaded with weapons. Following his capture, Miller cut a plea deal with prosecutors, testifying against fellow white supremacists in return for a reduced sentence.

“Because he testified against other prominent white supremacists, the white supremacy movement basically ostracized him,” Pitcavage said. After being released from prison, Miller laid low for a few years before re-emerging in the late 1990s. Since then, he has run for U.S. Senate, published a book and been active on the forums at VNN.

As part of his 2010 run for the U.S. Senate from Missouri, Miller aired a radio advertisement in which he railed against immigrants and African Americans, using a series of racial slurs.

“The future of white children will be a nightmare,” he said in the ad.

Two of Miller’s three sons have died since Miller was released from prison, according to Pitcavage. One son died in a car accident in 1998, police shot another son in 2008, following a road rage incident.

In postings at VNN, Miller often praised Franklin. After Miller helped the SPLC get in touch with Franklin, who was on death row at a Missouri state prison, Franklin denounced his own murder spree, in which he had targeted interracial couples.

Miller discounted Franklin’s recanting of his crimes, according to Beirich.

On the day of the shootings, Beirich called Miller’s wife to ask if she knew where her husband was. Miller’s wife, who was unaware of what had happened, told Beirich that Miller had left the house in the afternoon the day before to go to a local casino, then called her that morning to say that he had won a lot of money.

When Beirich called later, Miller’s wife said that police had arrived to inform her that her husband had been arrested.

Following the killings, some commenters at VNN praised Miller, while others condemned him for killing two non-Jews. “I don’t agree with what [Miller] did (since it didn’t accomplish much), or who he chose to target, nor do I condone random violence, but I certainly don’t have empathy for them — some christians at a jewish community center,” one VNN commenter wrote.

Both Beirich and Pitcavage said that they saw similarities between Miller and James Wenneker von Brunn[, the 88-year-old white supremacist who shot a guard at the United States Holocaust Memorial Museum in Washington in 2009. Both were older men who had been active in the white supremacist movement in the 1980s and had been relegated to the fringes of the movement in recent years.

“When your motivations are ideological, age is not necessarily a limit,” Pitcavage said.

For Beirich, the biggest question is how to know when violent words are set to turn into violent actions. “You just don’t know when one of these people (is) going to go from activism to picking up a gun,” Beirich said. “What we know is, a lot of killers come from this world…. But what is it that eventually causes them to go kill somebody?”