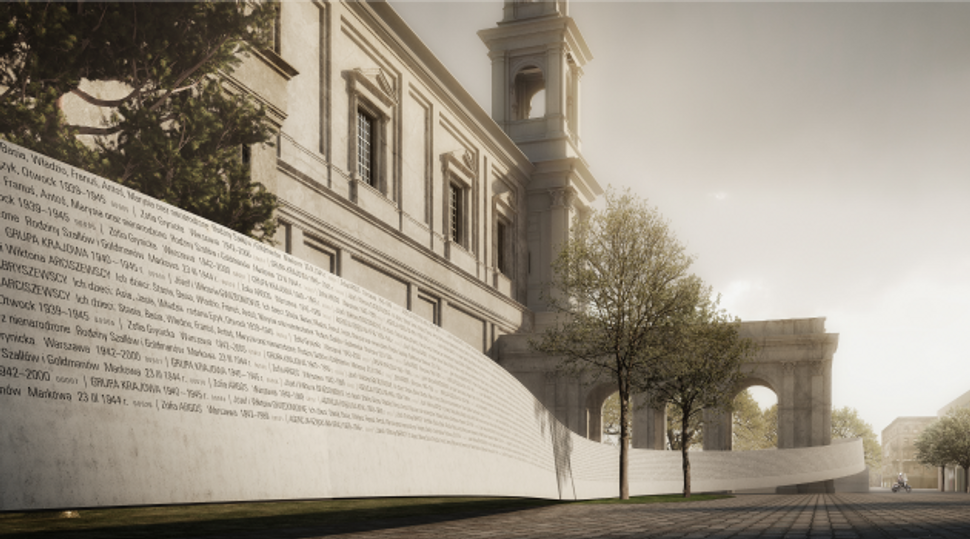 Righteous Ribbon: A ribbon emblazoned with names of Polish ‘righteous gentiles’ would wrap around a church in a planned memorial in Warsaw. Image by city of warsaw

In Poland, where 3 million Polish Jews died at Nazi hands, not one but two new monuments are being planned in Warsaw that will memorialize — and, some fear, distort the role of — the several thousand non-Jewish Poles who tried to save them.

As Holocaust Remembrance Day approaches, both projects are generating heated criticism. But in their respective approaches, they also reflect competing narratives and competing political agendas in contemporary Poland.

One proposal, put forward by Jews but also controversial among Jews, is to build a monument in what was once the Warsaw Ghetto honoring these rescuers. This monument, still in the planning stage, is expected to go up sometime next year, near the new Museum of the History of Polish Jews. Its intent is to honor the 6,454 Poles that Yad Vashem, the Israeli Holocaust museum and research institute, has identified as so-called Righteous Gentiles.

A second proposal, to locate a memorial in Grzybowski Square, adjacent to All Saints Church, has already been approved by the Warsaw City Council. In March, the council okayed the monument’s design and appropriated funding for it. This monument, also slated for completion in 2015, will be a concrete ribbon inscribed with the names of 10,000 Poles who allegedly saved Jews. The ribbon will curl around three sides of the church. These names will be selected according to different criteria than that used by Yad Vashem, which is known for its rigorous examination of applications.

Spearheading the Grzybowski Square project is historian Jan Zaryn, editor-in-chief of In the Net of History, a monthly historical publication. Zaryn, 56, is a passionate defender of Polish heroism during World War II. Critical of Poland’s detractors, he condemns authors like Princeton University historian Jan Gross, who has written several books that purport to document a significant role by Poles in aiding, abetting or profiting from the Nazis’ genocidal project.

“I am obliged to the past generations of Poles, as long as I am alive, that the lies about their attitudes and beliefs be finally buried,” Zaryn wrote in an email response to a question from the Forward.

According to Zaryn, whose parents Yad Vashem has recognized as Righteous Gentiles, it’s time for the Polish side of this period of history to be told, and with it should come recognition of the great numbers of Poles who saved Jews. “Ten thousand names is only a beginning,” Zaryn said in his email. “In my opinion, at least 1 million Poles provided [Jews] assistance,” he said, whether it was “constant [assistance] or more often sporadic assistance, situational help.”

Jews lead the other memorial project, adjacent to the new Museum of the History of Polish Jews, under the auspices of the Poland-based Foundation for Remembrance, chaired by Sigmund Rolat, a Polish Jewish survivor of a forced labor camp who today lives in New York. The planned monument is to be titled “To Rescuers From Survivors.”

Rolat, 83, who worked tirelessly to establish the museum itself, argues passionately about the need for a monument of gratitude to the Righteous Gentiles.

“Those people who risked their lives, and the lives of their families, to save Jews were every bit as heroic as those who were going to die in Treblinka and heroically chose to die by jumping out of their windows from the burning houses in the ghetto,” Rolat said. “Sure, there were many bastards, but that makes the individuals who saved Jews even more heroic.”

No one doubts that the non-Jewish Poles who sought to save Jews were extraordinarily brave. Any Pole caught helping a Jew faced summary execution by the Nazis, as did the members of his or her family. But opponents regard the proposed monument’s location across from the museum, in the district where a few hundred doomed and ghettoized Jews launched a sustained and hopeless uprising in 1943 against the Nazis, as a violation of a sacred space.

“It is even more painful to us, because the idea came from the Jewish community,” a trio of prominent Polish Jews wrote in an open letter in Polish in late March, protesting the plan. “It’s not that we do not want to erect a monument to the Righteous, or pay them respect in a different way,” they wrote. But locating the monument prominently right next to the museum would promote the impression that their stand somehow represented the Polish people’s wartime response to the Holocaust while “chasing away the spirit of Jewish narratives [that are] inconvenient for the majority.”

The few Poles who saved Jews, they emphasized, “did not operate on behalf of the Polish nation. They were a handful, and the most lethal threat to them was other Poles [who] held strong anti-Semitic beliefs.”

According to the letter writers — Helena Datner, a former president of Warsaw’s Jewish community; Bozena Uminska-Keff of Warsaw’s Jewish Historical, and Elzbieta Janicka, a prominent Polish Jewish public intellectual — a tribute to Righteous Gentiles next to the museum will reinforce a stereotype that “still dominates in Poland, making the Righteous the majority.”

Konstanty Gebert, a prominent Polish Jewish author and columnist who serves on the board of the foundation planning the memorial, pointed out that there are already monuments on the mall surrounding the museum, including a statue of the late German chancellor Willy Brandt, who opposed the Nazis during World War II. In Gebert’s view, many of the hundreds of thousands of people expected to visit the museum are simply unaware that Poles rescued Jews, and the monument will inform them of this.

The planned memorial at Grzybowski Square, meanwhile, is provoking critics who charge that it intentionally seeks to promote a view of Polish rescuers as a broadly significant wartime phenomenon.

Grzybowski Square is on the border of the former ghetto, on what was then the Christian side of Warsaw. Priests from the All Saints Church, to which the memorial will stand adjacent, did, in fact, help Jews escape from the ghetto and survive the Holocaust. In 2009, Yad Vashem posthumously recognized the church’s pastor, Marceli Godlewski, as a Righteous Gentile.

But University of Ottawa historian Jan Grabowski, a native of Poland whose father was a Holocaust survivor, deplored the Grzybowski Square monument as part of a wider campaign to rewrite history by making it appear that the major preoccupation of Polish society during the war was to save Jews.

The memorial’s inflation of the estimated number of rescuers is not an isolated phenomenon. Indeed, in a separate effort, Radio Maryja, an archconservative Catholic radio station that has broadcast commentary seen widely as anti-Semitic, claims that listeners have submitted 12,000 names of Poles who risked their lives to save Jews. Those names will be placed in a new Chapel of Remembrance in Torun, Poland, the station said.

According to Grabowski, there are plans for additional memorials in other Polish cities.

“The Righteous were a desperate, hunted, tiny minority,” Grabowski protested. “They were not the norm. They were the exception.”

Architect Czeslaw Bielecki, a Jewish supporter of the Grzybowski Square monument who has been involved in the selection of its design, said Polish researchers have a higher number of rescuers than Yad Vashem, in part because they will name institutions such as convents where Jews were hidden. Most of the Jews rescued were children, said Bielecki, among them, former Polish foregn minister Adam Daniel Rotfeld.

“Polish researchers have come up with a higher figure for Righteous Gentile than the Yad Vashem number,” said Bielecki, who added that his own parents were saved by two Catholic women “who hid them at great risk.”

Today, there only 10,000 to 15,000 Jews left in a country of 38.3 million, compared with Poland’s prewar Jewish population of 3.3 million. But traditional anti-Semitic attitudes remain a reality.

A recent nationwide poll in Poland found that 63% of the respondents believe there’s a Jewish conspiracy to control international banking and the media, while 90% of these respondents have never met a Jew.

In the absence of contact with actual Jews, the gap between narratives has widened. A 2009 poll conducted by the Polish Center for Holocaust Research asked who suffered more in World War II, the Jews or the non-Jewish Poles. The majority said both suffered equally. Indeed, of the 6 million Polish citizens killed during World War II, half were non-Jews. But this perception reflects a narrative that does not account for the fact that 90% of Polish Jews were killed, compared with 10% of ethnic Poles.

“Many Poles say they suffered more than the Jews during the Holocaust,” said Barbara Engelking, the center’s director. “We are all the best in suffering.”