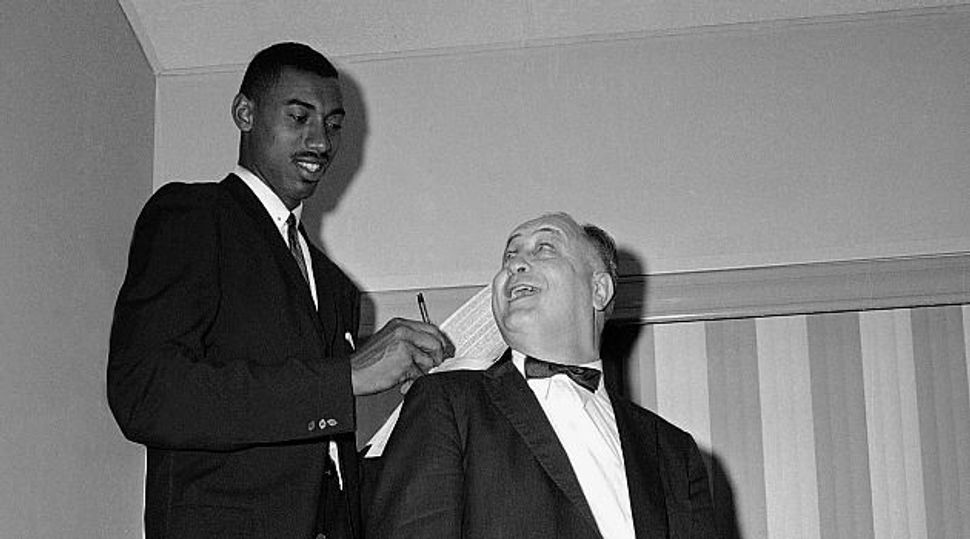 What’s Up, Wilt? Eddie Gottlieb, who was honored at South Philadelphia High School, peers up at Wilt Chamberlain in 1959. Image by ap image

But during his four years as principal of Southern, as insiders call the school, Otis Hackney III never realized that a framed diploma of legendary basketball star and alumnus Eddie Gottlieb was hanging on a wall in the school until just before the ceremony that took place May 21 on Southern’s front lawn, dedicating a state historical marker in Gottlieb’s memory.

A custodian had noticed and realized the diploma’s significance about an hour before the ceremony, and he called Hackney as the Forward was interviewing him about the dedication.

“Want to see something funny?” Hackney said, and led me around the corner, where the framed diploma of Isadore Gottlieb, class of 1916 — the very same Eddie — hung.

“There’s no such thing as luck,” Hackney said. “It’s the intersection of preparation and opportunity. I’ve walked by that thing a million times, but I wasn’t prepared to recognize it. Opportunities cross our paths all the time, but who’s taking advantage of them? Those who are prepared.”

Today, Hackney hopes that the Gottlieb dedication will inspire his racially and ethnically diverse students.

Attacks on Asians by African-American students in late 2009 brought notoriety to Southern. The incidents, which Hackney terms “The Beast,” led to an overhaul of the school’s administration and to Hackney’s arrival as principal. These days, he said, intergroup relations are much improved.

Like many of Hackney’s students today, Gottlieb was an immigrant. Arriving with his family from Kiev in 1902, the Jewish newcomer rose from humble beginnings to become a founding father of the National Basketball Association, now a multibillion-dollar enterprise with 30 franchises; stars known by such shorthands as LeBron, K.D., Dirk, Kobe, D-Wade and ’Melo; offices in 14 countries, and multiple television broadcast deals.

Back then, the contributions from Gottlieb — better known as “The Mogul” — were seminal:

Wilt Chamberlain’s still-record 100-point game in 1962, which he played as a Philadelphia Warrior? Gottlieb had pushed for a territorial draft that landed The Stilt from nearby Overbrook High School by way of the University of Kansas.

Team schedules? Gottlieb penned them for the entire league by hand on napkins and scraps of paper, possessing an encyclopedic grasp of train departures, arena availability and city holidays, said his biographer, Rich Westcott.

The NBA’s Rookie of the Year award recently bestowed upon Philadelphia 76ers’ point guard Michael Carter-Williams, who averaged 16.7 points per game? That would be the Eddie Gottlieb Trophy.

Gottlieb earned enshrinement in several basketball halls of fame, but hoops weren’t his only game; he owned the Philadelphia Stars of baseball’s Negro Leagues, served as commissioner of a regional football conference, promoted wrestling matches, booked thousands of school and sandlot games on city facilities, and even represented entertainers as an agent.

The sweet three-pointers swished by Golden State Warriors guard Stephen Curry are things of beauty. Fifty-two years ago, Curry’s Oakland, California-based Warriors were Philadelphia’s own, before Gottlieb sold the team. Before that, the Warriors won the 1955–56 NBA championship and the 1946-47 title of its predecessor league, the Basketball Association of America. Prior to that, Gottlieb played for, coached and owned the predominantly Jewish team known as the Sphas, for South Philadelphia Hebrew Association, one of organized basketball’s earliest dynasties.

The 76ers of today, the NBA team many Southern students doubtless cheer on, who play in an arena just 2 miles down Broad Street? The Sixers reside in the City of Brotherly Love only because Gottlieb, having left Philadelphia without a franchise, arranged the very next year for two other Jewish alumni of Southern, Irv Kosloff and Ike Richman, to move their club, the Syracuse Nationals, here.

A lifelong bachelor, Gottlieb, who died in 1979 at the age of 81, might very well nod approvingly at the state of the league today, particularly its diversity; about 25% of today’s NBA players are foreign born. When Gottlieb began coaching the Warriors in 1946, in the then-BAA, the league contained just 11 franchises, with St. Louis the westernmost outpost.

Today at Southern, about 950 students, many of them immigrants, speak 14 languages. But whether native or foreign born, many students are drawn to America’s homespun sport, basketball.

The tribute to Gottlieb thus presented Hackney with a teachable moment, a chance for speakers who knew Gottlieb, or at least his legacy, to affix him to a metaphorical alumni pedestal to benefit today’s Southern students.

Attending the dedication was Harvey Pollack, a vigorous man of 92 who still works as the 76ers’ statistician — a 68-season streak of pro-basketball employment going back to the Warriors’ very first game, against the Pittsburgh Ironmen, when Gottlieb hired him away from local colleges. There was the cane-bearing Jerry Rullo, 90, who played on that first Warriors team and also for Gottlieb’s Sphas. And next to him stood Ernie Beck, 82, a member of that second Warriors championship club.

“Here’s a poor immigrant kid who had the energy to develop a passion, which was sports, into an international activity: basketball,” said Marc Adelman, class of ’57 and a member of Southern’s alumni association.

Basketball fans, Hackney’s students included, live in the here and now, attuned to today’s stars. But Hackney hoped to see the dedication spur student discussions about Gottlieb. More importantly, he hoped it would lead them to consider the values of passion and professional commitment required to make a success of life.

Dikembe Mutombo, a longtime NBA player, now retired, and a native of the Democratic Republic of Congo, attended the marker dedication as a kind of living embodiment of the values required. “Success in life is not just where you come from, but where you want to be tomorrow,” said Mutombo, who represented the league at the event. “It can be a driving [force] for them. They can walk from the school and look at this wonderful plaque and say, ‘He went here.’”

Tuyen Luu, a freshman born in Vietnam, was dressed to the nines in the school’s Junior ROTC uniform, joining several classmates marching onto the turf as the ceremony began. Softly shy, hesitant even, Luu bore the mien of someone who’s slowly discovering herself. Upon enrolling in the school, Luu, by her own description, lacked any semblance of self-confidence. A friend urged her to join ROTC.

The experience has been positive. The group envelops her in camaraderie and purpose. “We look out for other people…and for each other,” she said.

“Right now, I have the confidence, just like that man did 100 years ago,” Luu said of Gottlieb. “I want to be just like him. Really. I can do anything.”