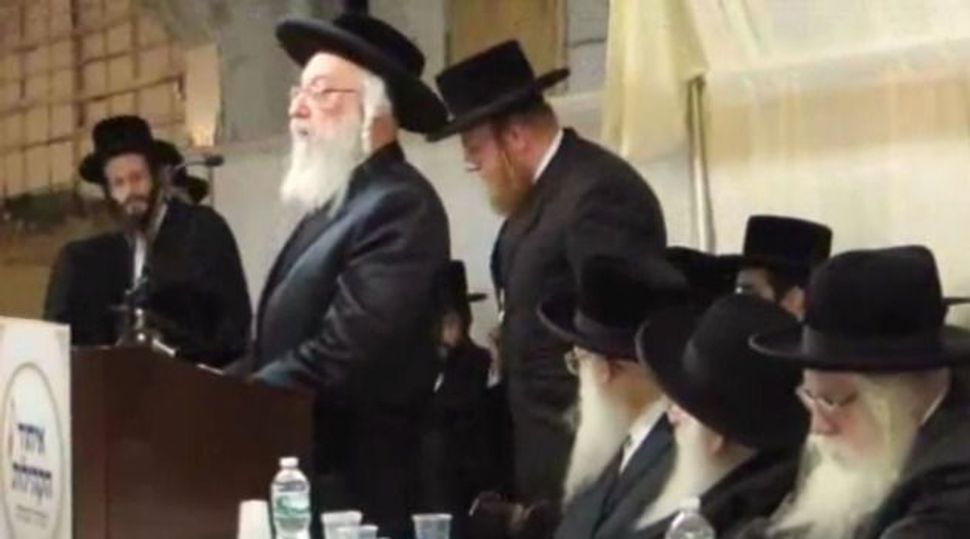 Ultra-Orthodox rabbis sought to enlist ultra-Orthodox women in their push to limit Internet use at a rally in Boro Park, Brooklyn on May 29, saying that women are responsible for controlling web access by their husbands and families.

Speaking to a crowd of 10,000 women, a panel of rabbis warned of the dangers posed by the web, but stopped short of banning smart phones and Internet outright.

Rabbis told anecdotes of mothers ignoring their children while using their phones, drawing gasps from the audience, according to one attendee.

The so-called Technology Asifa, organized by the same group of ultra-Orthodox religious leaders and activists who drew 40,000 men to Citi Field in Queens for an anti-Internet rally in 2012, filled a warehouse belonging to the Bobov Hasidic sect on the outskirts of Boro Park.

The speakers, all of whom were male, addressed the crowd from behind a one-way mirror, according to a report in the Orthodox newspaper Hamodia. The women in the audience could see the men speaking, while the men speaking could only see reflections of themselves.

The proceedings were conducted largely in Yiddish, and Hamodia has not reported on the content of the rabbis’ speeches. No other report on the event is publicly available in English. A short video clip of the event highlights posted on YouTube includes a portion of a speech in Yiddish by Asher Anshel Katz, the Vien rebbe, summarizing the message of the event.

In the clip, Katz says that women’s phones should not have web connections. But he also recognizes that some women need access to the Internet over their phones. “At the same time families must be supported, people must be able to connect with the world to have a job,” Katz said.

Instead of an outright ban, speakers emphasized the power of women to control Internet use by their families, according to one attendee. Some ultra-Orthodox girls’ high schools mandated attendance by 12th graders. Adults attended as well. One rabbi made a PowerPoint presentation. Speakers offered tips to the women, including checking their email before their children wake up in the morning. A pamphlet left on every chair was titled “Let’s Save Ourselves and Our Generation.”

A photo essay on the event on the ultra-Orthodox website Yeshiva World News shows the male rabbis and the women’s empty seats before the event, but includes no images of the female attendees.