How Do You Talk Dirty in Yiddish? Have you ever wondered how you might say “quickie” in Yiddish? Or maybe “sugar daddy” or “one-night stand”?

You wouldn’t be the first.

In 60 years of researching the Yiddish language, linguist Mordkhe Schaechter collected vocabulary on every aspect of human life and developed vocabulary lists for many specialized subjects not covered in detail by regular dictionaries. He published glossaries like “Pregnancy, Childbirth, and Early Childhood: An English-Yiddish Dictionary” (1991) and “Plant Names in Yiddish: A Handbook of Botanical Terminology” (2005). Among the many subjects his research covered was one that has been mostly left out of Yiddish lexicography — sex.

Like nearly all Schaechter’s work, the love and sex terminology he collected remains unpublished. There is only one place to find it: several boxes of note cards marked “libe,” “love,” in his son Binyumen Schaechter’s Manhattan apartment.

Read the Yiddish version of this article at the Forverts.

These “love-cards” have become legendary among young Yiddishists. At Yidish-Vokh (Yiddish Week) and other Yiddishist gatherings, I have heard people ask how to say something related to love or sex, and usually nobody knows the answer. The question is often met with, “Perhaps you’d find an answer in Dr. Schaechter’s files.” Such terms (especially the juiciest of them) aren’t usually learned from parents, but from friends, TV or pop music. With Yiddish, however, the normal process of cultural transmission has been interrupted, and younger Yiddish speakers find that they don’t know many of these words.

Thanks to a new generation of young researchers, that situation will soon change. Last March, literary scholar Zohar Weiman-Kelman received the YIVO Institute for Jewish Research’s Dina Abramowicz Emerging Scholar Fellowship to research Schaechter’s “love cards,” and is preparing to write about the world of love and sex in Yiddish in the coming years.

“I’m interested in how the past comes to life through this terminology, the sexual window it provides on our history,” Weiman-Kelman told the Forward. “Schaechter’s cards provide a unique glance into a period of Yiddish history, an important phase of Yiddish searching for its place within American culture. Because it is an unfinished archive, looking at it we see complex movement, in which some words are coming from Yiddish into English while others move in the opposite direction. The languages themselves intimately interact as they produce a new vocabulary for intimate interaction.”

I recently visited Binyumen Schaechter in order to go through the note cards that his father had collected over six decades. In his apartment in Chelsea, surrounded by Yiddish books written by his sister, father, aunt and grandmother, he told me that some of the words in his father’s files were not final linguistic pronouncements, but suggestions for possible terms that Mordkhe Schaechter had coined himself. Binyumen Schaechter explained that his father would eventually have rejected some coinages and accepted others.

Mordkhe Schaechter, who died in 2007, immigrated to the United States in 1951 after receiving his doctorate in linguistics from the University of Vienna. In addition to publishing textbooks and articles and working as the editor of the journal Yidishe Shprakh, Schaechter taught Yiddish at Columbia University and Yeshiva University and at other institutions.

He conducted his lexicographic research by working as both a collector and a detective; when he encountered a Yiddish word that interested him, he wrote it down on a note card along with the sentence in which it had been used. Afterward, he put the note card in a box organized by category and filed it alphabetically according to its English translation.

In these boxes, Schaechter would also insert short clippings from articles in English and other languages, using underlined terms and concepts for which he wanted to find (or create) Yiddish equivalents.

All these words, carefully sorted in Schaechter’s files, were written on more than a million note cards. He had planned to publish a dictionary of Yiddish terminology for the 21st century based on his massive lexicographic collection but he did not live to complete the project. The inheritors of his linguistic legacy, led by his daughter Gitl Schaechter-Viswanath, Paul Glasser and Chava Lapin, will soon publish the first edition of this long-awaited dictionary through the League for Yiddish.

Although Schaechter’s note cards will disappoint those looking for the most obscene Yiddish words, they do include numerous Yiddish words and expressions found in Yiddish literature that were excluded by most dictionaries. Two such Yiddish expressions are “tsu zayn a knak in bet” (to be good at sex — literally, “to be a bang in bed”) and “tsushteln a baykhl” (literally, “to deliver a belly”), which Schaechter translated as “to knock up.” 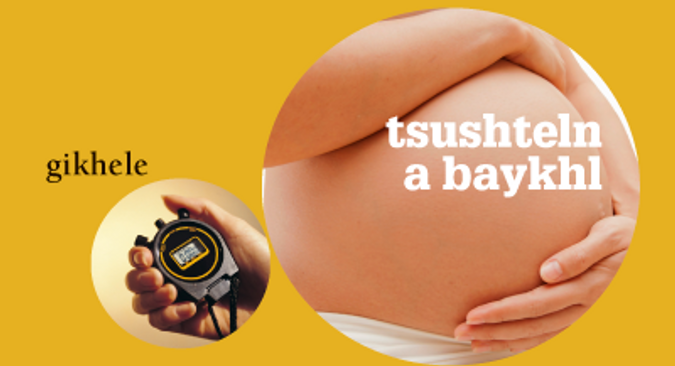 Also notable are a large number of Yiddish words that existed almost solely in formal medical contexts and in the pages of medical journals and have been largely forgotten today. In this category are words such as “polutsye” for “nocturnal emission,” “genital-bergl” (literally, “genital-hill”) for “mons pubis,” and “di tsayt” (literally, “the time”) for “period/menstruation.”

As someone who strongly believed that Yiddish needed to keep up with the times in order to remain relevant, Schaechter also included many words that he coined, based on English equivalents for new things and concepts. For words relating to the lesbian, gay bisexual and transgender community, for example, he suggested “farshtelnik” (literally, “a disguised person”) for “drag queen” and “homobar” for “gay bar.” For concepts related to sex crimes, which were not widely discussed before World War II, he suggested terms such as “randke-gevald” for “date-rape” and “bande/grupe-gevald” for “gang-rape.”

Among the most interesting terms are those that reflect the changing sexual mores of a liberalizing American society. Among such terms are “eynnakhtl,” Schaechter’s coinage for a one-night stand; “onknipverter” (literally, “catching words”) for a pick-up line, and “araynkhap” (literally, entrap, do quickly, consume hastily or seize the opportunity, among other meanings) and “gikhele” (literally, “little quick thing”) for “quickie.”

For the word “sexy” itself, Schaechter suggested “tsutsiik” (roughly, something that pulls in, something attractive) and “yetser-horedik” (literally, evil-inclination-y) alongside the internationalism “seksi.”

The few hundred “love-cards” are just a tiny fraction of Schaechter’s massive linguistic research. They do, however, shed light on an aspect of Yiddish culture that has long been ignored by most scholars.

How Do You Talk Dirty in Yiddish?