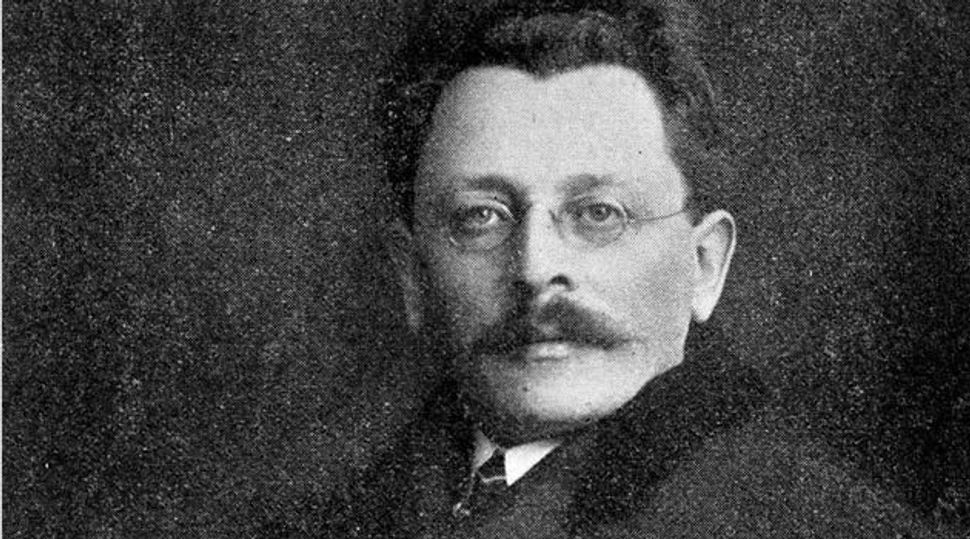 I’ve just returned to Berlin from a journey to Lodz and several other cities in Poland that are currently in German hands. The trip was eventful. I was in the apex of the area where Russian barbarians were raging not long ago and that currently breathes freely under German rule. Earlier I sought out the pogrom echoes as they were evinced in Lodz. Then I visited several other towns that had suffered egregiously from pogroms so brutal that their butchery was of the sort perpetrated by the katsaps themselves. I spoke to many families where the men had been hanged and the mothers and daughters raped by soldiers and officers. The details were horrifying and disgusting. My notebook has pages of victims’ names. Each name stands for a separate image or scene of horror from which the heart fills with pain and sorrow. But of those personalities and events I covered, I’ll discuss later. In this letter I’d like to convey general facts about several towns in the war zone where the Russians raged in a pogrom-like manner.

I must say here that many of the worst pogroms took place in areas where the Russians are once again in control and where one cannot currently investigate. Several details have, however, reached Lodz in the short time since the first time the Germans captured the region and the second time. The Jews residing in Lodz and around the area corresponded with their brothers in Lublin and Radom and each told the other news about the troubles they were enduring.

And so several facts are now known about the areas under German rule but these details are like drops in an ocean of blood-chilling details impossible to relay. Many of them will surely remain concealed from the rest of the world. That is surely the case as far as attacks on women. Neighbors and fellow townsfolk of these victims guard the names of these unfortunates like a holy secret. Exceptions are of course found. And each town has its victims whose misery is widely known and who make no pretense to hide it from the world. I spoke to some of those people during the course of my journey.

“What do I have to hide,” a woman whose two little children were attacked by several Cossacks, told me. She is the widow of a butcher from Harta and Kalisz Province and her name is Chana Rivke Yakabovitch. She spoke quietly, few words, and her voice resonated with a deep pain. “God willed it that my house should be robbed and my children tortured. One mustn’t question God. I thank him even so that he saved my two older daughters.’ The two older girls escaped to the cellar through a hidden door. The door was located in the same room where their younger sister, a 14-year-old girl, was raped several minutes later.

The mother of a second victim, in a choked voice with sighs and moans, told of her tragedy. She is the wife of the baker Gershon Leyb Rosenshteyn of Zlotchew, 14 miles from Warsaw. The Cossacks destroyed everything they could find in their home. Money, jewelry and other worthy goods were stolen and their daughter, a young woman of 18, was raped. “But the Master of the Universe was good to us,” the wife concluded her story sighing. “He sent my unfortunate daughter a young man. This boy saw how the Cossacks were dragging her away and torturing her but he loves her still, why shouldn’t he? Is it her fault that the wild beasts persecuted her? The wedding will be in a year if God lets us live.”

In the town of Salatin, 28 miles from Zlotchew, four young women committed suicide. They took poison immediately after the Cossacks released them. In dozens of other towns similar suicides took place. Some people I spoke with said that their wives, sisters and daughters were attacked. They asked me, however, not to publish their names.

“It wouldn’t bother me for the world to know,” a miller of Zdunska Wola told me, “but my wife thinks that if nobody knows she too will forget one day. In our town many young women were raped. The amount of victims is vast, a huge amount. Everyone saw how they were dragged through the streets. We all heard their heart wrenching screams through the windows. “It was horrible! Awful! But why should we be ashamed? What is the shame when a wild beast attacks you or when a plague comes on a village?”

He told me more about how the unfortunates were tortured in public places in front of everyone. Many details are horrid, disgusting.

The officers took part in the rapes as much as the enlisted men. The first thing they would do when they arrived in town was to find a “patriotic” Pole and get a list from him of the Jewish girls. With this list they would pound the streets of town, break into the houses on the list and attack every girl and woman they found. If the husband or father happened to be at home the soldiers would force him to stand by and watch their murderous actions. Frequently mothers and daughters would be raped in the same room.

The amount of women raped to death is enormous. Many of these unfortunates were attacked by dozens of soldier-beasts, many women were attacked while laying in bed having just given birth a day or two prior. These victims were killed at the soldiers’ hands.

In a few towns the soldiers gathered the young women and wives together in a “camp” where they kept them for several days. Those who survived were released. One of these towns was Dabria, 20 miles from Zlatchev. Dozens of fathers and husbands were killed heroically protecting their daughters and wives.

The beasts weren’t satisfied merely to attack the women. When one of their victims was wearing jewelry or had money on her person, they robbed her of it. Among the robbers weren’t only soldiers, but also officers. The number of Jews beaten or hanged by soldiers and officers is a lot greater than previously estimated. The majority of them were murdered without any official complaint filed against them or guilty sentence passed. The Cossacks hang Jews simply as a pastime.

In many instances the murderers would try to concoct some libel against their victims. These libels were for the most part supported by the Poles who participated in a boycott against the Jews even prior to the war. It’s not possible to say that the Russians simply believed these libels because they were shot full of holes, even a child would recognize them as outright lies. That is especially the case with the claims invented against Jewish spies. I investigated many of those and am convinced they are idiotic.

A vast amount of Jews paid with their lives for refusing to reveal where their daughters and women were hidden. In many cases Jews were hanged because officers had wanted to see “Jewish feet jolting in the air.” This was amusing for the Cossack officers.

Characteristic of this crucifixion of pillaging, blood-spattering and demonic rape and abuse is the fact that many of unfortunate homes where the women were attacked belonged to Jewish soldiers’ families. While the husband was on the battlefield fighting for “his” country, his “brothers-in-arms” destroyed his home and abused his wife and children.