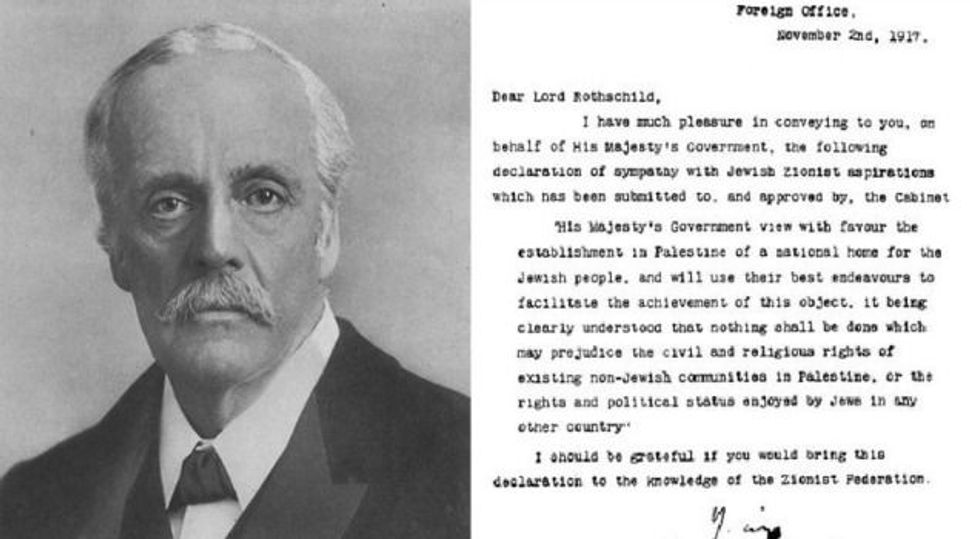 Eretz Israel: Lord Balfour (above), along with his famous letter to Baron Rothschild. Image by Wikimedia Commons

If such news — that the land of Israel is going to be given to the Jews, had come 50 years ago, it would have made a totally different impression on the Jewish masses than it is making today.

It would then have had a similar impact as the coming of the Messiah as it has appeared in the long history of the Jewish Diaspora.

The current news of the possibility of the realization of the Zionist dream in the near future doesn’t make such an impression on anyone.

Even the most conservative Zionists wouldn’t dare to even try to convince the masses that this development would bring an end to all their troubles and that it would therefore put an end to their movements for freedom and justice in the Diaspora.

True conservative Zionists probably wish that the current Zionist news would have exactly that kind of hysterical effect on the Jewish worker. But they are aware that if they tried to create such an effect it would be made mincemeat of by even those Zionists on the left who are themselves socialists.

And so the great difference between the impact that such news would have made then and the effect it has today points to the powerful reversal that the socialist enlightenment has had on the psychology of the Jewish masses. This enlightenment has caused them to detach from the hysteria history of the masses who expected soul salvation for thousands of years.

Today they understand that this Zionist news doesn’t change anything in their cause as workers and citizens of the countries they find themselves in.

As we’ve already said in the July 3, 1915 editorial — we already said it then — the times are such now that we can no longer speak of the impossibility of the Zionist ideal. But we also added that that doesn’t change anything in our goals to organize the Jewish worker masses in the Diaspora in their class struggle. And to continue to work for the ability to live peacefully with the masses of the countries they inhabit.

Then they, the millions and millions of Jewish workers who find themselves in all countries of the world, would remain where they are in any case, even if there were a Jewish state in the Land of Israel.

Yes, even in Egypt, where the laws of Moses were expressly forbidden, they lived very religiously. And that was when they had their own kingdom in the Land of Israel. And still millions of them returned to forbidden Egypt — most likely because it was naturally easier for them to make a living there. There were so many Jews there that they had their own temple.

And then when there wasn’t such great upheaval in the world, when there weren’t any railroads or steamships, no telegraph and not much international trade, millions of Jews still spread all over the world, not remaining in their own country — which today we are still waiting for?

All peoples who have their own countries have millions of children living among other nations — even those who are predominantly rural laborers.

Especially Jews, the race of wanderers, the people of industry and business. Especially today it has become customary for our people to wander.

Conditions won’t be so great for the Jewish masses in the Land of Israel that they’ll want to flock there from all the countries in the Diaspora and stay there.

Jews currently have a strong sense of responsibility. They believe that when they are among their own Jewish brethren they will have it as good as it gets. Their economic interests will be met.

But Jewish history demonstrates that such hope is a deception. In those horrific times in the history of the Jews when they were driven out of Spain and Portugal, the Jews of Rome offered to the Pope (Innocent the 8th) one thousand ducats that he not allow the expelled Jews into Rome!

They were afraid that their expelled brethren would make it too crowded for them. The Pope got angry with them for such entreaties. He said that the main man in charge of the Inquisition had more pity on the expelled Jews than their Jewish brothers did. He punished the Roman Jews for their behavior and allowed the Spanish Jews into his country.

That demonstrates that even the biggest Jewish woes don’t give rise to Jewish brotherhood displacing economic interests.

The economic interests of today’s few Jewish colonists in the Land of Israel are such that they hire cheap Arab laborers in their colonies rather than their own Jewish brothers. Jewish Labor parties are carrying on a fierce struggle against that there. But it doesn’t help. Economic interests are a thousand times stronger than national brotherhood. Especially when the grand excitement of national struggle passes and everyone gets immersed in their own economic interests.

Economic interests will make it so that millions and millions of Jews will also, even when Jews have their own state, conduct themselves as per the old Yiddish saying: “In our graves let’s lie among Jews but let’s make our subsistence among goyim.”

All leftwing Zionists agree with us on this point. And it is also the current instinct of the widespread Jewish masses. Because of it, they don’t embrace the Messiah hysteria like they once did.

And the socialist enlightenment is responsible for this victory.