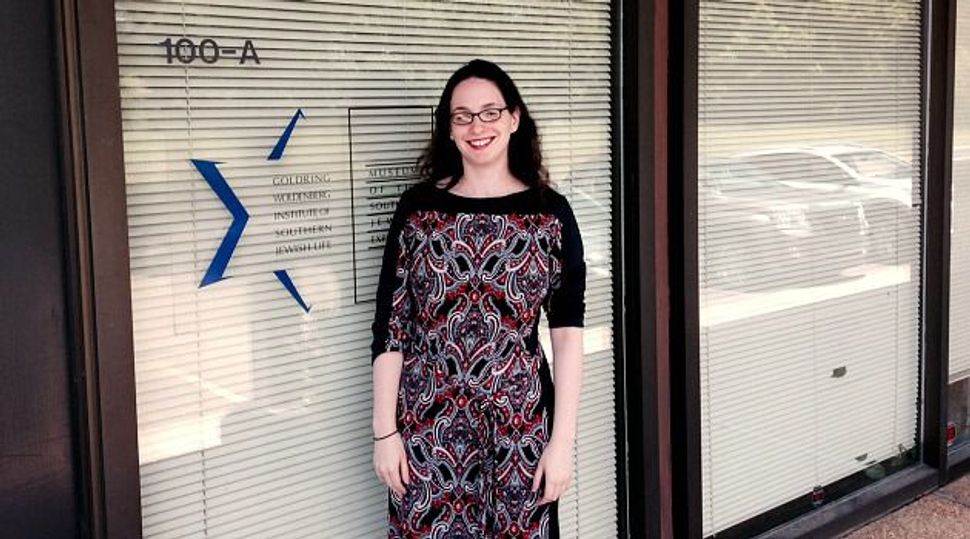 Malkie Schwartz stands in front of the Institute of Southern Jewish Life in Jackson, Mississippi. Image by Anne Cohen

Malkie Schwartz stands in front of the Institute of Southern Jewish Life in Jackson, Mississippi.

Turn off Highway I-55 N at Frontage Road in Jackson, Mississippi and you’ll come across a non-descript squat brown building. Inside is a trove of Jewish learning.

The Institute of Southern Jewish Life (ISJL) delivers rabbinic services, educational programs and cultural events to small Jewish communities spread across 13 states. Their community engagement director is Malkie Schwartz, whom New Yorkers know as the founder of Footsteps, a nonprofit organization that supports Jews seeking to transition from ultra-Orthodoxy into the mainstream. Schwartz left Crown Heights’ Chabad Lubavitch community in 2000. She moved down south five years ago.

Anne Cohen and Sigal Samuel caught up with Schwartz in Jackson, the latest stop on their road trip through the Jewish South.

Anne Cohen and Sigal Samuel: What made you decide to move to the South and work at ISJL?

Malkie Schwartz: [ISJL President and CEO] Macy Hart and I would meet frequently at events put on by mutual donors and Jewish organizations. When I said that Footsteps was getting a new executive director, Macy had this idea to help me transition — and it included coming here and helping to start the community engagement department, now five years old. The idea was that we would build a department that recognizes the Jewish legacy of social justice in the South.

We started working with congregations across the regions to identify a need in their community that they themselves can help address through meaningful partnerships. The idea is to give volunteers who are Jewish — but not exclusively Jewish — an opportunity to make an impact in their community.

It’s not episodic service. We’re really trying to build relationships — not parachute in and out.

As someone who grew up in New York, what did you expect to find in the South?

I got here in 2009 and honestly I didn’t have much of an impression of Jewish life in the South at all. That might have been the reason I was willing to come. People have such stigmas in their head about the South, and I didn’t really have that. I wasn’t informed about the region.

What I’ve learned over the past five years is that it’s amazing how dedicated people are to Jewish communal life in the South. People know that they really determine the quality of Jewish life in their community. It’s not like someone else is going to take care of it if you don’t. It’s very different from New York — and very unique and vibrant in its own way.

Sentimental attachment aside, is there inherent value in sustaining Jewish life in small Southern towns?

Yeah! Diversity is important everywhere. It’s about personal relationships: You get to explain to people the wide range of Jewish experiences, and you get to hear some of what people have always wanted to know about Judaism. I’d say the same thing about sustaining a Muslim or Hindu community. It definitely means that in a Christian majority, people are more aware — that a Christian prayer might be exclusive of others, for example.

Have you experienced any anti-Semitism here?

I think people might have preconceptions but it’s usually not malicious; it comes from a place of not having met anyone who’s Jewish. Have I heard some statements of ignorance? I’m sure I have, but not anything that was maliciously targeted. People are very curious. When you say you’re Jewish, people have a lot of questions and they’re excited to meet you.

This June marked the 50th anniversary of the Freedom Summer. To commemorate the event, the ISJL hosted a major conference highlighting Jewish involvement. Why was that important?

In addition to commemorating Jewish involvement in the civil rights movement, the point was to make a statement that Jewish social justice is alive and well. It’s not just, “Oh, there was this story 50 years ago.” It’s happening right now. And it was pretty amazing.

Speaking of civil rights issues, last year the Supreme Court ruling in Shelby v. Holder stripped Section 4 of the 1965 Voting Rights Act. Is that of concern to the ISJL?

We as an organization aren’t taking a position. But that is of concern to some of the staff members here. We invited Bend the Arc to involve us as individuals in their campaign.

Moving forward, there are four buckets of issues: education, voting rights, workers’ rights and health care. We’re hopefully going to be involving the local and regional Jewish community in the next action items for these issues.

Does your experience founding Footsteps motivate your work at the ISJL?

It was always important for me to not live in a bubble — somewhere where everyone is similar to me. For many Footsteps participants, that’s a priority. And the ISJL’s Department of Community Engagement is about making sure people build relationships with people outside their own experience.

What do the two populations you’ve served have in common?

For many Footsteppers — who don’t necessarily have a college education — opportunities are limited. I saw a need and an opportunity for a community to be built. I was fortunate to meet others who faced a similar situation and from a grassroots position we coalesced and put a structure in place so that other people facing similar situations can have some support.