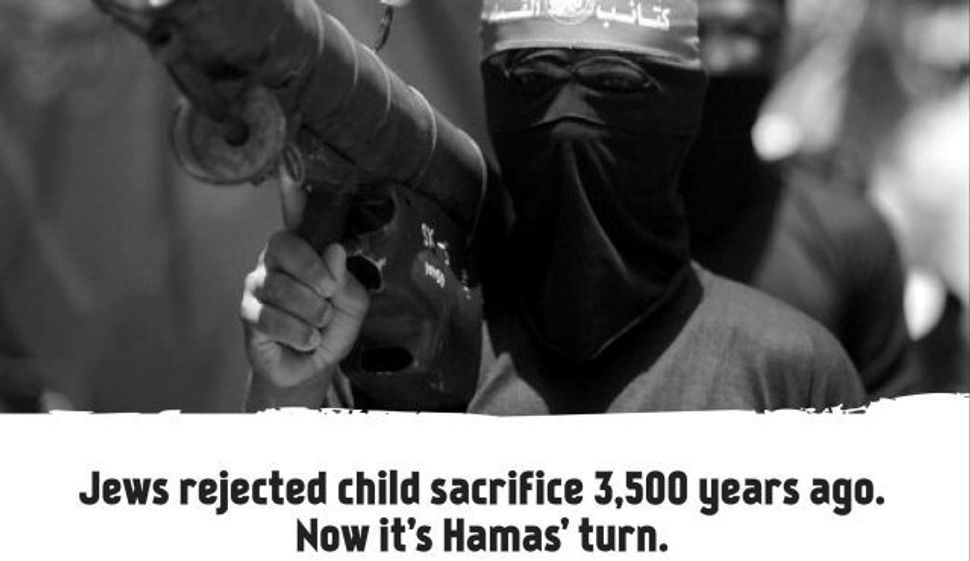 The Guardian has agreed to run an advertisement accusing Hamas of “child sacrifice” after another British newspaper, The Times, refused to print it.

The ad, written by Nobel prize-winning author Elie Wiesel, calls on President Barack Obama and other world leaders to condemn Hamas’ “use of children as human shields.”

“In my own lifetime, I have seen Jewish children thrown into the fire,” Wiesel, a Holocaust survivor, wrote. “And now I have seen Muslim children used as human shields, in both cases, by worshippers of death cults indistinguishable from that of the Molochites.

The ad is sponsored by This World: The Values Network, an organization founded by outspoken U.S. Orthodox Rabbi Shmuley Boteach. It has run in several U.S. newspapers including the New York Times, Washington Post and Wall Street Journal. The latter is published by News Corp, which also owns The Times.

Boteach last week accused The Times of being part of a British media “already infamously skewed against Israel.”

The Times rejected the ad because “the opinion being expressed is too strong and too forcefully made and will cause concern amongst a significant number of Times readers,” according to a statement from a representative of the newspaper, the New York Observer reported.

The Guardian confirmed recently that it had agreed to run the ad. The Observer praised the decision.

“The Guardian may be left wing but they obviously believe in free speech and allowing their readers to hear the voice of a Nobel laureate about a very important issue,” the report said.

The Guardian, in response, said that the paper’s “acceptance of an advert does not mean, of course, that it endorses the views and claims made within it.”