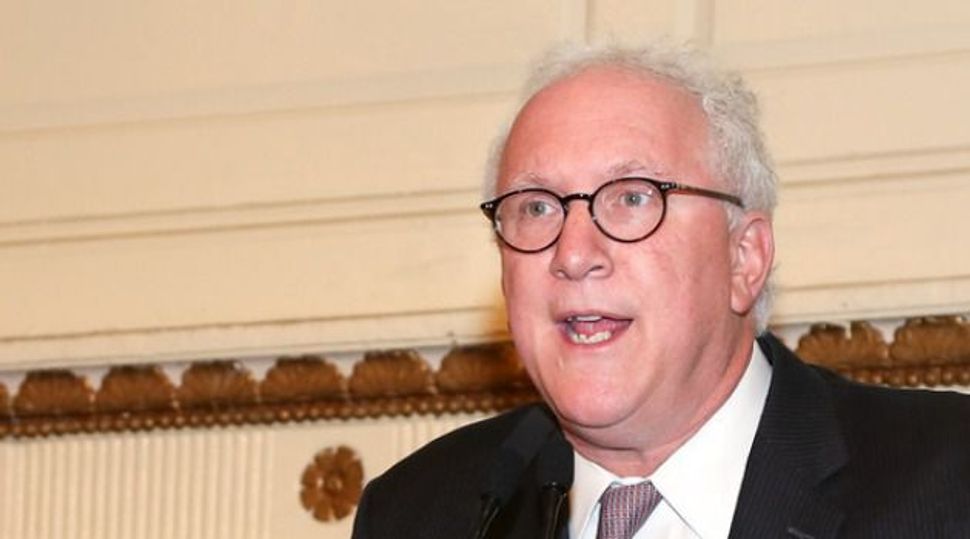 More than a year after the arrest of its executive director, the Metropolitan Council on Jewish Poverty is struggling to regain its footing.

Still reeling from the guilty plea of its former CEO and executive director, William Rapfogel, on charges that he stole from the organization, and similar guilty pleas from two other former top officers, the poverty charity is now on the brink of losing yet another CEO.

The Forward reported on August 20 that David Frankel, who was hired to lead the organization soon after Rapfogel’s arrest, is planning to leave after just a year on the job. Now, the group is looking to hire its third CEO in just two years.

With the organization focused on reorganizing itself and on managing the damage caused by Rapfogel and his cronies, some worry that its programs are suffering. Met Council claims to provide social services to 100,000 New Yorkers annually.

“The agency has to right itself. It’s a very big problem,” said one person who works with Met Council and asked not to be named, in order to protect his relationship with the organization. “When all this happened, there was a lot of stuff that just fell [by] the wayside.”

In a statement to the Forward, the Met Council said that the group had undergone significant changes under Frankel’s leadership. “Over the past year, we’ve made critical improvements to our organization’s policies and procedures — all while ensuring the highest quality of service to our clients,” the group wrote.

Met Council said that Frankel would leave his post as CEO and executive director as soon as a successor was picked, though he would continue to serve as the group’s executive chairman to finalize reforms to the Met Council’s governance and operational structures.

On August 22, the Forward reported that Met Council was considering hiring Rabbi Moshe Wiener, head of the Jewish Community Council of Greater Coney Island, to replace Frankel. Neither Met Council nor Wiener responded to requests for comment on that report.

The Forward has also learned that Met Council board member Abraham Biderman is being considered to succeed Steven Price as president of the organization, according to three sources close to the Met Council. Biderman, who is ultra-Orthodox, is a managing director of the investment firm Eagle Advisers and also serves on the boards of the ultra-Orthodox umbrella organization Agudath Israel of America and the Conference on Jewish Material Claims Against Germany. Biderman did not respond to an inquiry from the Forward.

A source close to the Met Council said that that Biderman was backing Wiener’s bid for the top job at the organization. Appointing the men to the group’s top lay and staff positions would constitute a major change for the charity.

“The Met Council, I think, had a reputation as being a secular Jewish charity,” said Lewis Fidler, a former member of the New York City Council who has worked closely with the organization. He characterized the Met Council as having “embrac[ed] somewhat Orthodox groups — the [Jewish Community Councils] and [the Councils of Jewish Organizations] — in a patrician-like manner,” referring to the local agencies in the Met Council’s network that provide social services in return for funding and operational support.

Met Council said in its statement to the Forward that it has been engaged in an overhaul of its programming as it has restructured its administration. “These administrative changes have put us on solid footing to expand our programming, and as a result, in the past year, every single Met Council social service has undergone an expansion or transformation to better serve our clients,” the organization wrote.

City and state agencies froze funding to the Met Council in the immediate aftermath of Rapfogel’s arrest. Those funds were released following a December deal with the New York State attorney general and other agencies, but, as part of that agreement, the group was forced to grant oversight to the regulators and to make changes in staffing and organization.

Frankel, a former Wall Street executive, is said by observers to have clashed with directors of the local Jewish Community Councils over efforts to renegotiate their affiliation agreements with the Met Council, steps mandated by the Met Council’s deal with the attorney general.

Many of the directors of the JCCs are ultra-Orthodox, particularly those based in Brooklyn. Frankel, unlike his predecessor Rapfogel, does not wear a yarmulke and is not seen as having close ties to the Orthodox community.

Wiener, for his part, has led the JCC of Greater Coney Island since 1981. The group has a $10 million annual budget. “He’s very well respected among the [Jewish Community Council] directors,” another source close to the Met Council said of Wiener.

Wiener is a member of the Chabad-Lubavitch Hasidic movement and would be among the first ultra-Orthodox Jews in recent memory to lead a mainstream non-Orthodox Jewish charity. The only other notable example was Rabbi David Cohen, Rapfogel’s predecessor as CEO of Met Council, who led the organization from 1979 until 1992 and stayed on as a consultant. He was one of the former Met Council officials to plead guilty in connection to the Rapfogel scheme.

Though widely admired by his colleagues, Wiener would be a different kind of appointment to lead the citywide organization than either Rapfogel or Frankel. Rapfogel, prior to his arrest and guilty plea, was a consummate political operator with particularly close ties to New York State Assembly speaker Sheldon Silver, one of the state’s most powerful political figures. Frankel was the city’s finance commissioner under Michael Bloomberg.

Wiener lives in the Lubavitch stronghold of Crown Heights, Brooklyn, and wears a long gray beard and a black hat. He is said to be a shy person. His group received more than $5 million in government funding in 2012, suggesting he has some political ties. But he’s also steeped in the world of ultra-Orthodoxy. In a lecture posted on the website torahcafe.com, he discusses why ultra-Orthodox men wear beards.

“One of the biggest sadnesses of what happened with Rapfogel is that he’s one in a million, he’s a mold of his own,” said one former Met Council employee, who asked not to be named in order to protect relationships. He suggested that Rapfogel was irreplaceable. “You need to be able to manoeuvre in all worlds — in the secular world, in the Modern Orthodox world and in the Haredi world.”

Wiener, by contrast, would be hard-pressed to measure up, according to the former employee. “If they’re going from Rapfogel to Frankel to Wiener, it’s like going from New York to California and back in a day,” he said.

If Wiener is hired, his selection would reverse a structure that has defined Jewish communal service in New York City in recent decades: While mainstream Jewish institutions have spent increasing resources helping the ultra-Orthodox and Russian-speaking communities, which recent studies have shown make up the most impoverished segments of the city’s Jewish populations, top positions in the groups have remained in the hands of non-Orthodox or Modern Orthodox Jews.

The appointment could also have implications for the Chabad-Lubavitch movement, which has played an increasingly prominent role in American Jewish life in recent decades. Mark I. Rosen, a professor specializing in Jewish not-for-profits at Brandeis University, thought this affiliation was significant. “The fact that he happens to be Chabad speaks to the increasing acceptance of Chabad in the larger Jewish world,” he said.