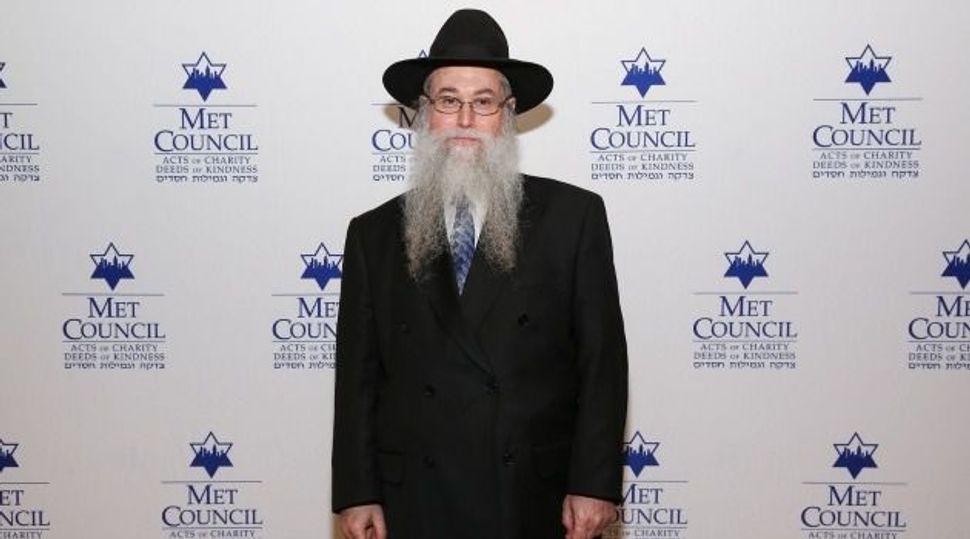 Rabbi Moshe Wiener Image by Courtesy of the Met Council

Wiener is a member of the Chabad Lubavitch Hasidic movement and would be the first ultra-Orthodox Jew in recent memory to lead a major mainstream non-Orthodox Jewish charity.

Three people close to the Met Council told the Forward that Wiener was under serious consideration for the job.

The Met Council has been in turmoil since last July, when Rapfogel was fired and arrested in connection to a conspiracy to steal from the organization. Two other former top-level employees also eventually pleaded guilty.

Rapfogel is currently serving a prison term at the Hudson Correctional Facility in upstate New York; he is not eligible for parole until 2017.

Under the terms of a settlement between the New York State Attorney General and the Met Council reached in December, the charity must submit the names of top-level hires for approval to a handful of regulatory bodies, including the Attorney General.

Wiener has led the JCC of Greater Coney Island since 1981. The group, which has a $10 million annual budget, is a member of the Met Council’s network of local JCCs and provides social services in south Brooklyn.

“He’s very well respected among the [Jewish Community Council] directors,” one person close to the Met Council said of Wiener.

The JCC directors have been in conflict with Frankel during his year at the organization as the groups have been asked to renegotiate their agreements with the Met Council. Many of the directors are ultra-Orthodox, particularly those based in Brooklyn.

Though widely admired by his colleagues, Wiener is a far different pick to lead the citywide organization than both Rapfogel and Frankel. Rapfogel, prior to his arrest and guilty plea, was a consummate political operator, with particularly close ties to New York State Assembly speaker Sheldon Silver, one of the state’s most powerful political figures. Frankel was the city’s Finance Commissioner under Michael Bloomberg.

Wiener, for his part, lives in the Lubavitch stronghold of Crown Heights, Brooklyn, and wears a long grey beard and a black hat. His group received over $5 million in government funding in 2012, suggesting he has strong political ties. But he’s also steeped in the world of ultra-Orthodoxy. In a lecture posted on the website torahcafe.com, he can be seen discussing why ultra-Orthodox men wear beards.

“If they’re going from Rapfogel to Frankel to Wiener, it’s like going from New York to California and back in a day,” said one former Met Council employee who asked not to be named to protect relationships. “You need to be able to maneuver in all worlds — in the secular world, in the modern Orthodox world and in the Haredi world.” If Wiener is hired, his selection would reverse a structure that has defined Jewish communal service in New York City in recent decades: While mainstream Jewish institutions have spent increasing resources helping ultra-Orthodox and Russian Jews, top positions in the groups have remained in the hands of non-Orthodox or modern Orthodox Jews.

Ultra-Orthodox Jews lead local and specifically ultra-Orthodox charities, but major mainstream Jewish institutions like the UJA-Federation of New York, FEGS and the Met Council have never been led by members of ultra-Orthodox communities.

The appointment could also have implications for the Chabad Lubavitch movement, which has played an increasingly prominent role in American Jewish life in recent decades. “The possible appointment of a Lubavitch head of a major Jewish organization signals the success of Lubavitch in crossing boundaries between Orthodoxy and the rest of the Jewish world,” said Steven Cohen, a leading sociologist of the American Jewish community.