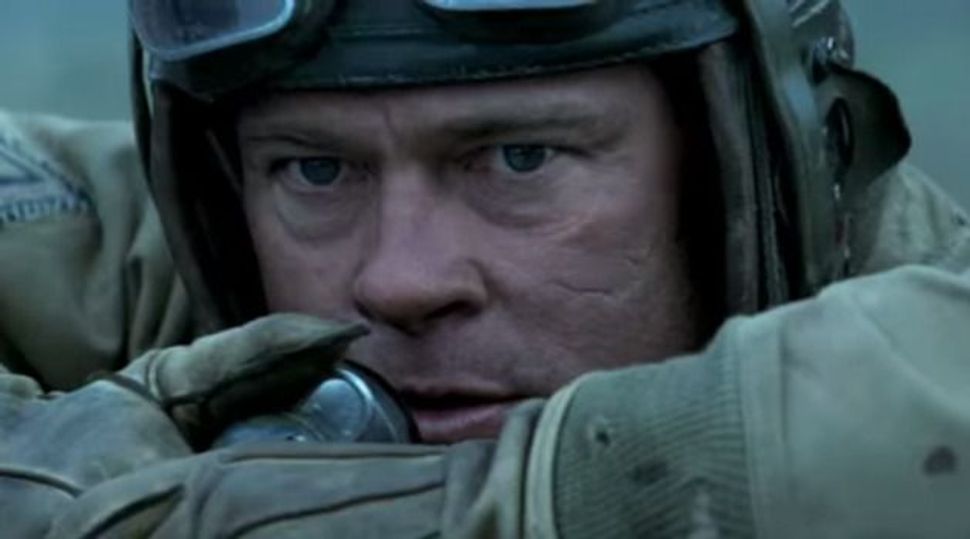 Jews vs. Nazis: Brad Pitt is back as a World War II soldier. Image by "Fury," Youtube

After comedies and action heroes dominate theaters during the summer, fall is the great comeback season for movies. Here are eight Jewy films to look out for in the coming months:

Prolific writer Israel Horovitz (who happens to be the father of Beastie Boy Adam Horovitz) has written over 70 produced plays in addition to several screenplays, but he has never written and directed a film project before. “My Old Lady” stars Kevin Kline as a New Yorker who inherits his father’s house in France. He is stopped from selling the house by characters played by Maggie Smith and Kristin Scott Thomas, and he moves in with their family to discover secrets about his family.

This documentary tells the story of Mossab Hassan Yousef, the son of Hamas leader Sheikh Hassan Yousef. Mossab worked as a spy for the Israeli Shin Bet security service from 1997 to 2007 after becoming disillusioned with Hamas’ brutality. Directed by Nadav Schirman, the film includes real surveillance footage and focuses on the relationship between Mossab and his Israeli handler in the Shin Bet. The film comes at a particularly timely moment, just after this summer’s conflict in Gaza has calmed down and leaders around the world ponder the future of Israel and Palestine.

Jonathan Tropper’s story about the Altman family (changed from Foxman in his novel) is about a family reunion necessitated by the grimmest of circumstances: sitting Shiva. Tropper has adopted his novel into a film with a star-studded cast; the family includes Jason Bateman, Tina Fey, Adam Driver, Rose Byrne, and Dax Shepard. Jane Fonda plays the newly-widowed matriarch, and despite the subject matter, the story is full of dry humor. Jewish Canadian director Shawn Levy co-produced and directed the film.

This film features two high-profile actors who you might not realize are Jewish: James Franco and Kate Hudson. The marquee names star as a couple who fall into debt in this drama about “bad things” that happen to good people. The script, an adaption of a Marcus Sakey crime novel, was written by Kelly Masterson, who also penned the highly-acclaimed film “Before the Devil Knows You’re Dead.”

Just five years ago, Brad Pitt played an infamous Nazi killer in Quentin Tarantino’s “Inglorious Bastards,” a bloody film set in World War II Europe. Now Pitt is set to take on the Nazis once more as an American tank commander in David Ayer’s “Fury,” which looks to be more violent and realistic than Tarantino’s film. The very Jewish ensemble cast features Shia LaBeouf, Logan Lerman, Jon Bernthal, and Jason Isaacs who all star alongside Pitt. The film will feature a rare German tiger tank on loan from the Tank Museum in Bovington, England.

Jewish Canadian director Jason Reitman, known for the films “Juno” and “Up in the Air,” has teamed up with Adam Sandler to produce this drama about the secret lives we live on the Internet. Sandler co-stars with Jennifer Garner and Rosemarie Dewitt in a story focused on modern forms of adolescent angst and adult sexual frustration. Text and email messages look to play a large role in the film, as they pop up frequently on screen.

Jewish heartthrob Jake Gyllenhaal seems to have firmly left behind his career as an action hero. In this thriller, he stars as an obsessive crime reporter who stalks Los Angeles late at night, a role that adds to a list of impressive performances (see Brokeback Mountain, End of Watch, Zodiac, and Jarhead). This looks to be a promising directorial debut from veteran screenwriter Dan Gilroy, whose father Frank was a Pulitzer-Prize winning playwright and brother Tony directed the Oscar-nominated “Michael Clayton.”

Jon Stewart’s directorial debut is political, but not in the comedic vein of his show. Stewart adapted the memoir of Maziar Bahari, an Iranian journalist who was imprisoned and tortured for covering the reformist campaign for president during Iran’s 2009 election. The Comedy Central host had a connection to the story before making the film — after having Bahari on his show to talk about his imprisonment, his former captors used the interview as evidence that Bahari was collaborating with Western spies. Gael Garcia Bernal, famous for his roles in “Amores Perros,” “Y Tu Mamá También,” and “Babel,” plays Bahari.