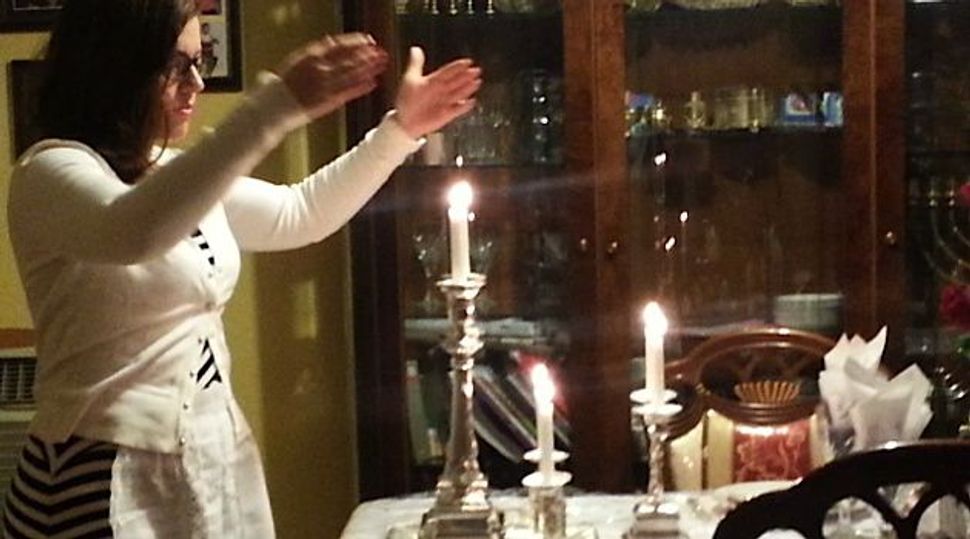 Clean Slate for Hashem: Frimet Goldberger wears the hand-embroidered cotton apron she received from her mother-in-law while lighting Sabbath candles. Image by courtesy of frimet goldberger

On the top shelf of our living room buffet sit some of our once-a-year religious accoutrements: a Passover matzo set, a white tablecloth for the sukkah and a white apron. This is not your typical kitchen apron; it is my vase shirtsl — literally, white apron: a small, square-shaped, hand-embroidered cotton apron made of fine threading and worn from the waist down, reaching a few inches above the knees. Every married Hasidic woman owns one. I received mine 11 years ago as one of the many customary gifts my future mother-in-law and khosn, fiancé, gave me over the course of my six-month-long engagement. Hasidic women traditionally wear the vase shirtsl when lighting Sabbath candles, and I wore mine for the first time on a Friday night, four days after my wedding. I tied it around the waist of my favorite black velour Sabbath robe, and, siddur in hand, blessed the candles and my new home.

I wore the white apron on Yom Kippur, too, a reminder of the day’s pureness and its significance: a clean, white slate in the eyes of HaShem.

For the adults and boys aged 13 and older in Kiryas Joel, the Satmar village in upstate New York, Yom Kippur was a pensive holiday spent mostly at synagogue. Young girls would fast and pray from the age of 12, but our place was at home, tending to siblings, nieces and nephews, so that the women could attend services. Every Yom Kippur until I got married, I prayed and atoned for my sins while being surrounded by young children and their ravenous demands.

If quiet contemplation was the overall mood of Yom Kippur, white was the holiday’s color. After the white tablecloth was set, my mother unwrapped the cleaned and stiffly starched vase kitl, which is a white robe used as a burial shroud for male Jews, but also typically worn by married Hasidic men on Yom Kippur as well as during Passover Seders and under the chuppah when they get married. It serves as a symbolic reminder that a person is but flesh and bone, a mortal bound for the grave.

As the candles were lit on the eve of Yom Kippur and a melancholic atmosphere descended upon us, my father would wrap himself in the white shroud and stand over the dining room buffet, stiffly starched white tash-tikhl, or cloth handkerchief, in one hand, and Yom Kippur makhzer, prayer book, in the other. One by one, he would put the handkerchief on each child’s head and, holding both hands in place, bless us individually — a moment frozen in time.

Following my father’s brukhe, or blessing, I watched through the dining room window as the ethereal procession of men in white kitls made their way to Kol Nidre. Their eyes to the sidewalk, and their hands tucked into their gartls, the belt that separates the upper body — the mind and soul — from the lower body and its impurity, they dragged their non-leather shoes on the cement. Wearing leather shoes, once considered the most comfortable footwear, is one of the five forbidden pleasures on the Day of Atonement — eating and drinking, bathing, anointing and and having marital relations being the others.

On Yom Kippur, married Satmar women cover their heads in white turbans or scarves instead of the usual wigs or other headgear, as was the wish of the lateSatmar rebbe Joel Teitelbaum. Every year, my mother, who normally wears a wig and hat, would spend half an hour in front of the mirror before going to synagogue, tying the white tikhl, or scarf, around her shorn head. Like many other middle-aged women, she opted for the classier look — the scarf — in place of a white turban, which was popular among the younger generation. Then she would tie her vase shirtsl around her waist and walk to the main Satmar synagogue of Kiryas Joel.

Yom Kippur changed after I got married at the age of 18. On the morning of the eve of Yom Kippur, in preparation for the holiest day of the year, I joined my fellow married ladies in the Kiryas Joel mikveh, the ritual waters. Unlike the regular, monthly visits to the mikveh, when a woman cleanses herself after menstruating, erev, or pre-, Yom Kippur is a discretionary dunk, and it is unlike anything I have ever experienced.

I was given a clean white bed sheet, and instead of waiting for the mikveh attendant to escort me down the hall to the ritual waters, I was told to wait in line after I had stripped down and taken a quick shower in my private room, which had a second door to the hallway leading to the mikveh. What I saw when I stepped out, wrapped in the white sheet and my turban, remains etched in my memory: rows of white sheets — identical, ghostlike female forms wrapped in nothing but white cotton. I remember feeling self-conscious and vulnerable, as I tightened the sheet around me and drew my hands across my chest. The woman behind me introduced herself as my cousin’s friend. Her confidence and chattiness gave her away as a veteran of erev-Yom Kippur dunking. I spotted my sister-in-law a few feet away, close to the mikveh doors, and I looked away, embarrassed to see her thinly veiled nakedness. I never took the dip on erev-Yom Kippur again.

That year was the first Yom Kippur at which I attended the entire services in the vaber shil, the women’s section, of the synagogue. I was four and a half months pregnant with my first child, and I premiered the maternity clothes I had just bought at Rosenfeld Maternity on Satmar Drive: a charcoal-gray knit skirt and matching loose sweater, with dainty black chiffon flowers across the neckline. Even pregnant Hasidic women generally fast on Yom Kippur, and some do so on Tisha b’Av, as well.

Listening to Kol Nidre in the synagogue that evening, in my charcoal-knit expectancy, white velour turban with gold accents on the three-prong knot, and vase shirtsl was an entirely different and almost sublime experience. The rows of wooden benches were filled with women in white headwear. Some older ladies were dressed in white from head to toe. The traditional Kol Nidre melody began as a singsong, an affecting chorus of thousands upon thousands of men, that rose to the women’s balcony. The echo bounced off the dome of the synagogue’s ceiling — a sound that warmed my heart. Sniffles arose from the rows around me, soft weeping that grew in volume and intensity, a collective cry from the suffering, for the suffering.

“G’mar kh’sime toyve” the people whispered as they made their way out of the synagogue. “May you be inscribed in the Book of Life for good.”

Five years later, after my husband, my children and I moved from Kiryas Joel, we abandoned many of our Hasidic customs that we did not find meaningful. I stopped wearing my appliquéd shirtsl, for no particular reason other than it being a hassle in the rush of pre-Sabbath preparations, and I have kept it on that top shelf in our living room ever since.

This year feels different. I have changed, and so has my acceptance of the past and the present. I am at peace with the path I chose in life and with my family’s level of observance. I have moved to a safe place, mentally and physically, where there are no authorities policing my religiosity. We, as a family, are now able to re-examine tradition as we know it, to fully embrace some of the customs we were once so eager to abandon and to pick up the valuable pieces dropped along the journey, and rediscover their beauty. So in honor of Yom Kippur, and as a reminder of the powerful symbolism the color white bears on this day, I will be donning my vase shirtsl and lighting candles in a freshly polished laykhter, or candelabra, like my mother, sisters and the rest of the world of Jews who will be bedecked all day long in white.