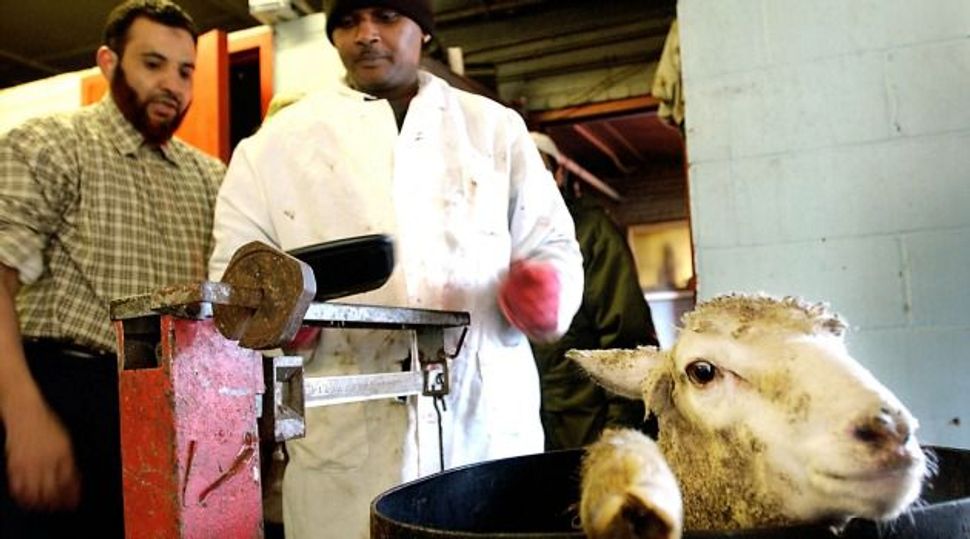 It’s not a great week to be a chicken or a goat.

That is thanks to a fluke of the Islamic and Hebrew calendars that has set the prescribed time for a Jewish ritual slaughter and a Muslim sacrifice within a single day of each other.

This year, the Jewish ritual of Kapparot is performed on October 3, while the Muslim festival of Eid al-Adha begins on October 4.

Kapparot, which some Jews perform the day before Yom Kippur, involves waving a live chicken in circles over one’s head and then having it killed. On Eid al-Adha, Muslim families traditionally sacrifice a goat, sheep, cow or camel.

The rituals have different religious meanings and don’t usually coincide. But this year in New York, as in countless other cities and towns throughout the world, Jews and Muslims will both be getting up close with live animals they usually only encounter on their plates.

For Muslims, the festival of Eid al-Adha commemorates a Quranic story that is the Muslim version of the binding of Isaac told in the Torah. Muslims believe that Ibrahim was ordered by Allah to sacrifice his son Ismail, but that a ram was provided instead at the last moment. Traditionally, Muslim families purchase and sacrifice an animal on the holiday, giving a third to charity, a third to a neighbor and keeping a third for themselves.

Kapparot, meanwhile, is ancient but controversial, even among the Jewish tradition’s most important rabbinic sources. The author of the Shulchan Aruch, a key 16th-century code of Jewish law, opposed Kapparot, as did the Gaon of Vilna, an influential 18th-century Lithuanian rabbi. Still, many Jewish traditions mandate its practice. The waving and slaughter of the chicken, performed on the eve of Yom Kippur, is meant to represent God’s judgment being transferred to the chicken.

That transfer is not imagined to be metaphysical, but rather symbolic. “To think for a moment that me taking a chicken and waving that chicken, that I’m going to receive atonement, it’s foolish,” said Shea Hecht, a Lubavitch rabbi and the chairman of the board for the National Committee for the Furtherance of Jewish Education. Rather, he said, “It’s meant to give me the mindset that when I enter the synagogue [at the start of Yom Kippur], that I recognize that life is a gift.”

After slaughter, the chicken is traditionally donated to charity.

In New York City, the animals sacrificed for Eid al-Adha are usually killed at one of the live meat markets that dot the semi-industrial neighborhoods in Brooklyn, Queens and the Bronx. According to Abdelghani (he gave only one name), the director of the Muslim Center of New York, a Queens mosque, a single person usually represents the entire family at the slaughterhouse.

“Practically, you cannot do it by taking the whole family, because the places are very small,” he said. 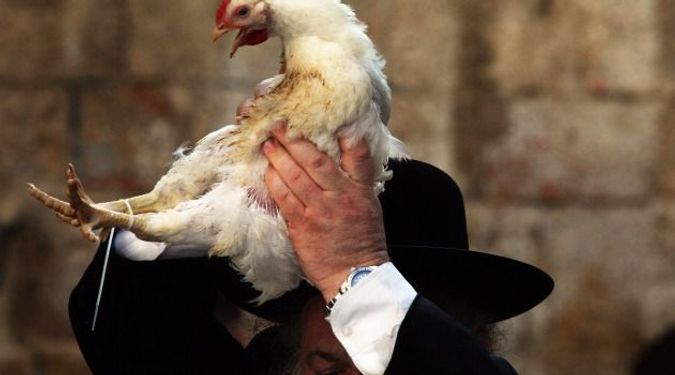 Muhammad Tahid Islam, a Muslim who lives in the Boro Park section of Brooklyn, said that he planned to go with his father to a local live animal market, where the family had already purchased a goat. Staff at the market kill each goat and then butcher it, sending the meat home with the family. The process can take awhile. Islam said that some years, the wait at the market can be up to six hours.

Managers and owners at a handful of Halal live meat markets in Brooklyn and Queens were unavailable when contacted by the Forward, presumably busy securing livestock to meet the impending demand. At one Halal meat market, the sound of chickens could be heard over the phone line.

Most families are set to perform the ritual on October 4, though the holiday continues for four days, and it is permissible to make the sacrifice through October 7.

Last year, a sheep escaped from one of Brooklyn’s halal markets in the midst of preparations for the slaughter. A Brooklyn couple named Coke Wisdom O’Neal and Mira Aldridge found the animal wandering in Brooklyn’s Sunset Park. “We chased the [sheep] down the street,” O’Neal told the website DNAinfo. “I was afraid it would get hit by a car. It was running around in the middle of the road.”

O’Neal later told DNAinfo that he caught the sheep because he thought his son Mercury, a vegetarian, would “kill me if I don’t save this thing.” The couple called the police, who returned the sheep to the halal market; it was to be slaughtered there days later.

“This is awful,” O’Neal told the website after learning that the sheep was doomed.

The Kapparot ritual is usually performed in less formal settings. Often, synagogues secure a load of chickens from a supplier and charge members to swing the chickens over their heads. They then send away the chickens to a slaughterhouse to be killed.

Other synagogues bring in experts in ritual slaughter to kill the chickens on site.

Kapparot has drawn increased scrutiny in recent years from opponents of the practice, who portray the treatment of the chickens as inhumane. A video posted online September 28 purported to show crates full of distressed and dying chickens stacked on a sidewalk in Boro Park in preparation for an early Kapparot ceremony.

When asked whether it planned to monitor the two sets of religious ceremonies, the American Society for the Prevention of Cruelty to Animals said that animal cruelty enforcement in New York was the responsibility of the police.

“The ASPCA respects religious beliefs and traditions, but is opposed to any practice in which animals are made to suffer in the name of religion or tradition,” the group said in a statement.